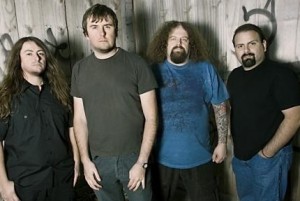 The UK's Napalm Death have signed on for another contract with Century Media. Lead vocalist, Mark Greenway, had this to say about the resigning:

"We're very happy to be re-signing to Century Media. In fact, I think it's the first time we've actually re-signed on a longer term deal with anybody since the days when we didn't strictly know that we could be digging ourselves a big hole with labels…It's important for Napalm to stay with an independent, and Century proved to us with their overall enthusiasm and attention that this is where we needed to be. There's a perfect balance of getting the band out there in people's faces whilst still understanding the point that not everything is acceptable or 'ethical' promotion. It's more like working with friends who actually care, and who could argue with that?"

Napalm Death will be releasing their 14th studio album on Century Media and will also be embarking on a tour of Canada in October.