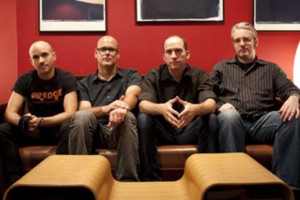 by Andrew Waterfield Dischord 10 years ago

Office of Future Plans, the latest project from ex-Jawbox/Burning Airlines frontman J. Robbins, have debuted "Salamander" the opening track from their forthcoming self-titled debut album, due out on the 21st of November from Dischord Records.

The band have a handful of dates remaining in their modest tour of the Northeast United States:

Give Up the Ghost/American Nightmare plan vinyl reissues, shows