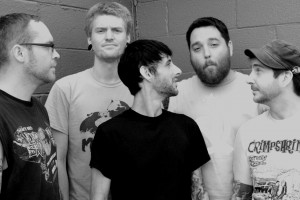 by Chris Moran Paper and Plastick Break-ups 11 years ago

Richmond, VA melodic-hardcore outfit Landmines has decided to call it a day. The band formed in 2005, and was the first to release a record on Paper+Plastick. Guitarist Tony Marston issued the following statement:

This band started as a group of friends getting together and jamming on (what we thought were) righteous punk rock tunes over cold (and sometimes not so cold) beers. Luckily, that never changed. Unfortunately life has gotten in the way. Our drummer, Patrick, has moved to Philly, and our singer, Paul, has moved back to Mass, both for very valid reasons, and the rest of us would never hold that against them, but we have realized that a long distance relationship is not for us.
Honestly, these are only a couple of the countless reasons the band has run it's course, they just happen to be that proverbial last straw. There's no hard feeling between any of us, we all love each other very much still and are still very stoked to get together over cold (or not so cold) beers. If you're one of the handful of people that was into the band, then thank you, and we appreciate it. Now go make your sandwiches.

The band's final release, Hell Is What You Make It was released this year. The band also recently released a music video for the title track.