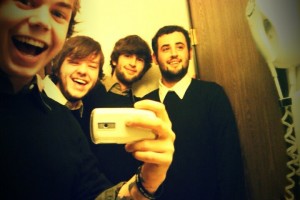 Via an Anonymous Source, Posted by Katy Hardy Asian Man Break-ups 11 years ago

The 1st Five is reporting that Houston, TX based O Pioneers!!! are calling it quits. Frontman Eric Solomon released this statement to the website:

O Pioneers!!! should have ended a long time ago. I started this band in the fall of 2004, and it's slowly changed and migrated into what it is today, based off of the millions of people that have been in this band. I got tired of trying to con people into playing songs that they liked, or may have been a fan of, but ultimately they didn't have a connection with, besides something that was at face value.

In light of the break-up, the band has released their entire discography as a pay-what-you-want download, which you can check that out at Juicebox Recordings. The band's last full-length, Neon Creeps, came out back in 2009.

Fans of band's work should keep an eye out for their new group, Black Clouds, which Solomon expands more on in his interview with The 1st Five here. O Pioneers!!! will do one last US tour this winter with New Bruises, and plan to play Europe in the spring.

Videos: Like Moths to Flames: "You Won't Be Missed"