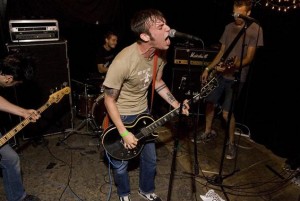 Contributed by tonynoidea, Posted by Katy Hardy No Idea Tours 10 years ago

Dear Landlord recently set up shop at Atlas Studios in Chicago to record a new song with the help of Matt Alison and Justin Yates. The track is slated to be featured on a compilation that Larry Livermore, former owner of Lookout Records, is releasing. The compilation will be titled The Thing That Ate Larry Livermore. Dear Landlord has also scheduled a string of shows to close out the year, playing with Banner Pilot, The Slow Death, The Dopamines, and Direct Hit at different stops on the tour.

Dear Landlord's latest full-length, Dream Homes, came out on No Idea Records back in 2009, and you can still stream it over at their profile if you've not yet heard it. The band more recently released a 7-inch split with The Dopamines back in August.