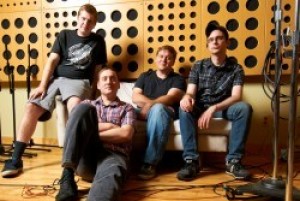 It didn't take long for Banner Pilot to disrupt the groundswell within the punk community from the likes of acts like the Gaslight Anthem and Off With Their Heads. Of course, if you were following the latter, then you were most definitely affixed to Banner Pilot. When the Minneapolis quartet released it's full length, Collapser, in 2008, it drew attention from critics and fans alike. Perhaps due to pedigree (ex-everything) or association ("Minneapolis," incidentally, is the punk code word for acceptance), Banner Pilot rose quickly and relentlessly. And then, nothing. As quickly as they came, they left. After long pause (and, apparently, incessant questioning), the group returned with their sophomore record on Fat Wreck Chords, Heart Beats Pacific. Punknews contributor Matthew Bentel caught up with bassist Nate Gangelhoff and found out why the band is on steroids, what keeps Banner Pilot going, and why Tom Delonge provided guests vocals.

Youâve characterized the new record, Hearts Beat Pacific as "Collapser on steroids." It sounds like a more refined and discerned product. Would you agree?
Thatâs interesting; when we were preparing this product for release we did some market research and the consumer consensus was that it was refined but not discerned, so we made adjustments accordingly and got it to where it is now.

No, actually--- I donât know; I guess the idea was to take what we liked about Collapser and make it bigger and better (i.e. like something on steroids). Whether we pulled that off is up to the listener at this point, I guess.

You explored with longer song structures on this record. Is that an affect of the aforementioned steroids?
For the last song on the record, I was actively trying to write a super long song, but the other ones just ended up that way. Plus, theyâre a bit longer than the older tunes, but weâre only talking 15 or 20 seconds for the most part. I donât think it amounts to a major change.

One of the more obvious differences on the new record is the cleaner, calm vocals - if that is even an appropriate description. What was the decision behind the restraint?
Itâs funny, we didnât even really notice that until the record came out and all these people were like, "Who is the new vocalist on some of these songs?" It never really occurred to us that we were doing anything weird or different. Part of it, if you want to get nerdy for a second, is that I wrote some of the music in the key of E ("Alchemy," "Spanish Reds"), where Iâve written a lot of the older stuff in B or C. So Nick really had no choice but to go higher than normal, or lower than normal.

I guess, basically, itâs a pretty standard vocal thing that we simply hadnât done much of until now.

What does a happy - or simply content -- Banner Pilot record sound like?
I think we already have plenty of songs that are content or even happy; just read the lyrics. Are there less of them? Sure. But look at any book, movie, or song: in general itâs always more interesting when someone is in trouble, or has problems. A song where the singer says, "Iâm happy / and everything is sweet / Canât stop my smiling / at everyone I meet / Out here on the street / If I were a goat, Iâd bleat" would be pretty boring to the average person, I think. In other words, a lyric of ours like "Howâd another year turn out so bad?" is much more intriguing than "Howâd another year turn out so rad?"

How did Jacques Wait contribute to the refinement of the sound on Hearts?
Heâs a great producer. He doesnât try to re-write your songs, but he knows when he can get a better take out of you, and his suggestions are always, in retrospect, spot on. Itâs just minor stuff, like dropping a drum fill, or adding a subtle guitar lead, but it all adds up and noticeably improves the record. I remember we were recording one of the songs and it sounded like kind of a mess; four people playing four parts rather than four people playing a song. He said, "Everyone take the most complicated thing youâre doing, and drop it." So we all cut out some of the trickier stuff we were trying, and boom: right away, the song sounded tighter, and more like a BAND instead of people jamming.

What were some of the places you found inspiration from? I swear, I find Blink-182 all over this record. I have friends still bitching at me for drawing their attention to it.
For writing the basic music, you wouldnât notice it but I was listening to a lot of Johnny Foreigner, Hold Steady, Superchunk, Foo Fighters, Gaslight Anthem, and other slightly-more-indie stuff like that. I donât think the finished record sounds like any of those bands, but maybe some of it influenced the songs slightly.

Blink… sure, I could see that. When that band is at their best, theyâre doing what weâre shooting for: punk music with simple but catchy melodies. Also, I did rip off a Blink drum beat when I was programming the drums on one of the early demos. So thereâs that. Tell your friends, "Fuck you, I was right!"

Banner Pilotâs infatuation with its Midwest upbringing continues on Hearts. Given its title, is there a certain amount of continuity being abandoned here?
No, it just sounded catchier than Heart Beats Lake Superior.

When Banner Pilot is compared to other Midwest, and more specifically Minneapolis, bands, is that a source of pride or frustration for you?
I like most of those bands, and we sound at least vaguely like most of those bands, so it doesnât bother me at all. Sometimes itâs lazy, like, "From the snowy land of Prince, The Replacements, and Adrian Peterson, comes Banner Pilot." But for the most part, yeah-- we like, and sound like, D4, Lawrence Arms, Dear Landlord, OWTH, etc etc, and thatâs great company to be in.

Regarding the Midwest, there are some perhaps ambiguous references that catch me as Chicago (Red Line, Western Terminal, Division Street); are those nods to Second City?
No, that wasnât intentional. Nick writes all the lyrics but I came up with those song titles before the lyrics were written, and I wasnât thinking about Chicago for any of them. Sorry, Chicago!

You published a book that cataloguesYou Idiot, a zine you published. Considering how modern technology is vastly changing the way everyone -- including punks -- seek and digest information, do you think the current music scene is devoid of an instrumental cohesion agent as zine distribution decreases or dries up entirely?
No. I loved zines growing up, but I donât think itâs really a terrible or tragic thing that theyâve lost the majority of their relevance. The cool thing about zines wasnât the act of stapling and collating paper, it was doing something on your own and getting people to check it out and think about it. And that basic concept is now easily achieved by doing a blog, self-publishing a book, making a podcast, posting a video, you name it. Itâs actually much easier to get your voice heard now.

If it wasnât some alcoholic beverage, what would get Banner Pilot through the day?
Oxygen, I suppose.