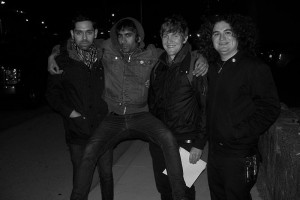 Peace, stability, comfort and achievement may all be used when describing the past year for Chris Conley of Saves The Day. Completing and releasing Daybreak, the final chapter of the bands ambitious and noteworthy trilogy, 2011 was a year of both personal and professional triumph. Prior to their Red Bull Noise Complaint show with Senses Fail at the Starland Ballroom in New Jersey, Chris took some time to speak with Mark Millard about Daybreak, the trilogy as a whole and the role it played in shaping personal growth as a human being.

2011 marked the release of Daybreak; the final chapter in Saves the Day's critically acclaimed trilogy, and ultimately, the end of a project that spanned roughly seven years. That said, what did 2011 mean to you? Is it safe to say it was a year of accomplishment?
2011 is the year Saves the Day finally found peace. I've been fighting against myself and the world, wrestling with inner and outer turmoil for most of my life. After years of searching, I finally feel at home within myself, and the band has also found stability and structure after endless change and upheaval. To be sure, 2011 was full of personal and professional victory.

Thatâs a very refreshing response. Looking back and reflecting on the lengthy project, just how tough of an undertaking was it to fundamentally ensure 37 songs worked together, while uniting themes and bridging gaps from album to album?
It was so much fun! I had never worked conceptually before the trilogy, but I found myself enjoying it more than I had expected. It certainly was ambitious and took a great deal of mental and creative energy, but I love writing music and lyrics, and I really got a lot out of the process. To ensure a seamless evolution within the unifying arc tying the different albums together, I kept a chart in our studio of all the lyrics from each release and I would highlight important themes and make notes in the margins with ideas of how to connect the dots from song to song. At the same time, as different musical ideas surfaced while writing, I would set aside songs with the proper emotional content necessary to the various transitions on each album to make sure the music reflected the lyrical transformation and created an overall evolution from dark to light.

Scoping the trilogy as a whole, an underlying theme is the process of learning and adjusting as a human being, with Daybreak representing eventual acceptance. Can you please take us through the themes of the trilogy, and ultimately, the process that led you to the idea of acceptance on the third record?
Life itself is incredibly challenging, as we must all face the pain of losing our loved ones and learning to move on knowing our own eventual demise is the only promise we are given. Under the surface, we are all suffering from the anxiety of our existence. However, we rarely talk about our shared fears, especially in the western cultures of the world, since we are subjected to the constant struggle of competing for resources, paying the bills, and conforming to the established norms of society. In order to get by and survive within the system, we must look and dress a certain way, communicate and think in an acceptable manner, and control our instincts and habits in order to avoid persecution and condemnation by our parents and peers. It's harder than we typically allow ourselves to believe.

As for myself, I cracked under the pressure of the modern world, and I drifted into a dark place of anger, cynicism, doubt, and denial. After becoming a father, I realized it was crucial for me to pull myself out of my negative mental reality and learn to live within the world without fighting against it. I had to learn to find peace within myself and within the world at large. It doesn't mean finding everlasting happiness, but it does mean finding a healthier way to respond to the challenges of life so that I could be a positive role model for my daughter and my family. The only way I knew how to stop the war within was to look inside myself and surrender to my own reality and the reality of the world. When I finally stopped fighting what was actually present within my heart, at first, what I found was the depths of despair; the anger, frustration, cynicism, hostility, and contempt.

Sound the Alarm is the furious truth of my aching heart, my tumultuous emotional landscape, and my fractured psyche. Knowing that I needed to turn myself around after nearly destroying myself and my relationships with my strained emotional existence. Under the Boards deals with the transition out of the depths of the darkness when we finally feel the weight of our mistakes and shortcomings, and we learn to start the slow journey of coming back to life. Daybreak is the moment of realization when we give in to the reality of our hearts, knowing that we lost our way in the midst of a complicated world, and we learn to forgive ourselves for our transgressions and learn to find peace within our hearts by surrendering to the struggles of life without tearing ourselves to pieces. Daybreak is not a happy ending, it is the reality of the heart's existence on the other side of despair, responding to life not out of a place of anger, but out of a core of compassion and caring where we feel our shared connection with every living being united in suffering and salvation.

Itâs rather apparent the complete process was not only one of musical growth, but a personal battle requiring immense learning, discovery and individual development. What was the most significant thing you learned about yourself throughout the project?
I learned that underneath the anger was an ocean of frozen tears from all the years of sadness too tender to touch. When I finally faced the truth of my heart, the tears thawed and streamed from my eyes as I cried for humanity, feeling the release of a thousand years of sorrow and searching. On the other side, my arms opened up to my fellow brothers and sisters, and I reached out from within to hold the world in a loving embrace.

Letâs dip back to 2004 when you first started writing for Sound the Alarm; where are you at today, not solely as a musician, but as a human being compared to seven years ago?
I'm on the other side of the coin. The darkness and the anger are behind me, and I've found the light of acceptance and the peace of a caring heart. In 2004, I was ready to set the world on fire and never look back. Now, 7 years later, I know that I can remain in the world and hold it close to my heart, feeling the ever changing flow of emotions as they come and go yet staying calm and quiet within myself, leaning into both the pain and the pleasure without rejecting or holding on to either one.

Thatâs really good to hear, man. So tell us, what's the general vibe with Saves the Day heading into 2012? What comes next for the band?
We feel more excited about the future than ever before. I have a lineup behind me with Arun, Rodrigo, and Claudio that is as committed and dedicated to the band, our music, and our fans as I have been for all these years. After more than a decade of constant ups and downs, it's a gift to feel the relief of this moment. We will continue to tour on Daybreak into the fall of next year, and then turn our focus to the next Saves the Day record in the winter when we will begin demoing and recording new material.

You have quite an eclectic music taste. I'm curious to know, what were your favorite albums of the year?
I have a few favorites of 2011. I absolutely love the new Peter Bjorn and John album Gimme Some with its tight arrangements, clever production, and non-stop hooks. I also listen to the new Tom Waits album Bad As Me almost daily, and the lyrics hit me in a tender way, leaving me breathless and touched. The self-titled release by Wild Flag is super cool as well, and I'm a huge fan of Quasi, so it's fun to hear such unique drumming and smashing garage rock song structures.