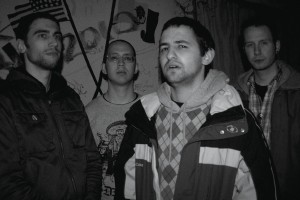 While many Punknews readers may associate Chicago, IL with the hometown of numerous beloved melodic punk bands, the city in recent years has also seen a flourishing hardcore scene emerge. One of the bands to lead the charge is Weekend Nachos, a four piece that plays what some refer to as "powerviolence" or something similar. Staff interviewer Andrew Clark spoke with vocalist Randy Yost about the band's unique name, people that piss him off, and reasons to visit Chicago.

Since I am not sure many readers know you guys yet, tell our readers who you are and what you do in the band.
My name is Snyder and I do vocals for Weekend Nachos. I also do a lot of other stuff for the band too.

You probably get this a lot in interviews, but how did you guys come up with the bandâs name? I was thrown for a loop when I first heard your music.
That was sort of the point. To throw people off. We wanted a band name that we wouldn't have to rely on for reputation's sake. The harshness of the music doesn't match the light-heartedness of the band name and we sorta wanted to make a point that a band's image doesn't need to match what they're all about lyrically or musically. There can be a bunch of different ways that a band expresses themselves and it doesn't all need to go in a straight line. Weekend Nachos came together because a friend and I were just matching up random words and trying to come up with something that we liked. The band name says nothing about us other than the fact that we're a pretty fun and silly group of dudes that love and appreciate cool shit.

Along with some other young bands, including Eddie Brock from Maryland and Coke Bust from DC, Weekend Nachos seems to be leading what some people might characterize as a "powerviolence" revival that draws upon an earlier legacy of ultra-fast, politically-minded hardcore. How do you feel about this concept?
Depends on what you mean by "this concept". I love fast hardcore, and I guess I love "powerviolence" to a degree. Do I feel we're leading the revival of it? Nah, I just think we were one of the first bands to really bring it back to the forefront of the hardcore scene in the mid-2000s, which was a time where it was pretty few and far between. Other bands like Mind Eraser and Think I Care were influenced by very similar styles before we were. I do think we've definitely influenced a bunch of bands since we began, though. But that's gonna happen as people hear your band more and more and enjoy what they've discovered.

Is there anything in particular that motivates you to play this style of aggressive music over another?
Well, I guess it's definitely the most energetic and powerful music out there, in my opinion. Death metal/grindcore-influenced hardcore punk is a pretty brutal combination, and most of what I have to express is pretty negative and angry, so there's not really a better way to let that kind of energy out. Our lives shows are pretty much an explosion of raw aggression and pure hatred.

Turning to the themes in your lyrics, are there any specific things that influence what you bring attention to? For instance, the song "Black Earth" on Worthless appears to be satirical, taking shots at those opposed to environmentalism; is this accurate?
Yeah, almost every song of ours is based on real people and events, or just things I deal with. "Black Earth" is directed at holier-than-thou Greenpeace activists that bother me while I'm trying to get to work. I don't care enough about the environment to want to talk to some shitty fucking loser or anybody for that matter, so fuck them for even existing in my world. I'm not gonna explain what each one of our songs is about cuz it would take forever but if you want to know what a specific song is about, you're more than welcome to ask a follow-up question and I'll explain it just as I did with "Black Earth".

Another song that really stood out to me was "Dubviolence" where you call out people on being homophobic. Did a specific experience prompt these lyrics or just a general observation about the world today?
Totally a combination of the two. On the one hand, I deal with homophobia a lot, and it's mainly when I observe what I see being directed at someone else, since I am not gay personally. That song is mainly about people who actually treat homosexuals maliciously, not just the belief that homosexuality is wrong. There are a lot of people who believe that and you know what, let them. That's not for me to decide. What I do think I have the right to decide is a person's freedom to live their lives without violence against them and without harassment from people who disagree with their lifestyle. In the song I do say, "fuck homophobia", because I do disagree with the belief that homosexuality is wrong, but the song really isn't about hating on that belief, it's more about the idea that no one should be disrespected.

The next few questions are not related directly to the bandâs music, but where you guys are from. Knowing that youâre from the Chicago area, why should someone like myself, a Northeaster, visit Chi-Town?
You shouldn't! I don't encourage anybody to travel here, things are just fine without visitors. But if you really want to know why it's a good place, well, there's some great food here and for the most part, I think Midwesterners are respectful people.

Is there anything you miss about the city when youâre touring that cannot be found elsewhere?
Yeah, I just miss being home, because that's where I'm most comfortable. I really hate traveling. But when you're in a band, there are rewards that come along with going on tour, so that's why I do it. In the end I care more about music and the band than I do about going places. The other members of the band might feel the opposite way.

Any big resolutions for the new year?
Yeah, my goals are to be a better boyfriend (although I'm already a pretty good boyfriend) and for Weekend Nachos to make it to Australia. There are a lot of people there that have been asking us to come over and I want them to be able to see us at some point. It's a very difficult thing to make happen but I think it's possible.

Last word is yours; use it wisely.
Thanks a lot for hearing what I have to say, man. Take care!