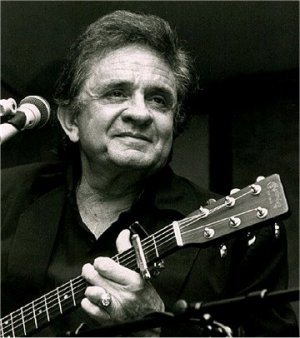 Contributed by aubin, Posted by Andrew Waterfield 10 years ago

On the 26th of February itself, the official groundbreaking of the Johnny Cash Boyhood Home Project in Dyess, AR is due to take place. John's children; Rosanne, John Carter, Cindy, and Kathy Cash Tittle; are to attend a launch event at 2:00pm at the Dyess Community Center, which will be followed by a birthday tribute. The Cash family came to occupy the Dyess house in the mid-1930s as part of President Franklin D. Roosevelt's 'New Deal'. Johnny Cash told the story (assisted by Patrick Carr) in his autobiography, Cash:

'When we finally got to Dyess, the truck couldn't get up the dirt road to our house, so Daddy had to carry me on his back the last hundred yards through the thick black Arkansas mud - gumbo, we called it. And that's where I was when I saw the Promised Land: a brand new house with two big bedrooms, a living room, a dining room, a kitchen, a front porch and a back porch, an outside toilet, a barn, a chicken house, and a smokehouse. To me, luxuries untold. There was no running water, of course, and no electricity; none of us even dreamed of miracles like that.'

The project is intended to stand as a permanent tribute to Cash's early life, as well as helping to reflect and illustrate what life was like for many during the Great Depression. The restoration is being led by Arkansas State University, who will also be working on other historical buildings around Dyess. It is hoped that the project will help stimulate the local economy, and fund scholarships to ASU for deserving students from the area.

As well as the restoration project, the Johnny Cash museum in downtown Nashville, TN is due to open later this year, displaying items from the long closed House of Cash, as well as new items endowed by Johnny's surviving relatives. Columbia/Legacy also intend to release a series of archive titles over the course of the year, starting with Bootleg IV: The Soul of Truth on the 3rd of April.

Just for good measure, here's Johnny Cash and the Tennessee Two playing 'Country Boy', a song Cash wrote in 1956 about his years in Dyess: