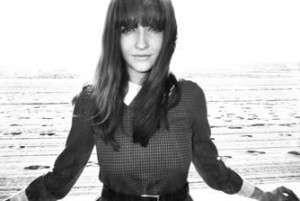 Starting out as the bass player for indie-punk trio Vivian Girls, Goodman provided a charging throb and backing vocals that were at times both soothing and haunting. With their debut, The Vivian Girls established a unique combination of classic punk, Motown harmonies and shoegaze fuzz.

Right now, The Vivian Girls are on break, so Goodman is planning to release her second solo LP under the name La Sera, in March, called La Sera Sees The Light. While the first La Sera, Self-titled LP was a swirling mass of layered, heavenly choruses, the new release is just a little meaner, a little sharper, and a lot more direct… it's almost as if Goodman herself has undergone personal illumination.
To find out what caused this clarity, staff writer John Gentile rang up Goodman to talk about the new LP, her life as a ginger and video games.

The new La Sera Album is called La Sera Sees the Light. Have you recently had a revelation? Perhaps you've recently had a near death experience?
I would say that 2011 was a huge year of change for me. My attitudes on a lot of different things evolved a lot, and I made this record during the course of that evolution. I do feel like I've had a lot of revelations, mostly about the best ways to live your life and the importance of the pursuit of happiness. But perhaps one of the main reasons I decided on the album name is that when said out loud, it sounds like "seize the light", which reflects my current desire to go out and make my own happiness.

One of the things that I liked a great deal about the first record was the ethereal quality of the sound. By contrast, I particularly like the harder edge on the new album, which to me, seems to share a certain feel with new wave, punk, and even hardcore. Was this change in sound a tactical decision, or is this just how the music came out this time around?
The main difference between this record and the last was that I worked with a different crew. On the first record, my super talented friend Brady Hall recorded and produced everything in his home studio, and on Sees the Light, I was working with a few people in a professional studio. So in some ways, the change of sound was just a direct result of recording in a completely different environment. The producer for the new album, Rob Barbato, is also a super talented guy, so it was fun working with him. Also, it should be noted that this record still has its fair share of ethereal harmonies and dreamy qualities, itâs just that some of the songs are definitely more direct punk songs.

I notice that the first track on the first album featured the lyrics "Don't go away," but the last track of the new album features the title "Don't stay." Is there a conceptual significance?
Interesting! I didn't do that on purpose, but the two songs can actually be seen as somewhat related. "Beating Heart" is a song about giving up and letting fate take its course, and "Don't Stay" is essentially about the same sentiment. Sometimes two opposing sentences can reflect similar moods, I guess.

You're also in the Vivian Girls, a very well known group. Do you purposefully play into or out of people's expectations on the new album, or is the audience not a factor when crafting your tunes?
I try not to let the fact that I am in Vivian Girls affect the work I create and put out. In Vivian Girls, Cassie is the main songwriter and lyricist, so I don't want to let, "avoiding sounding like Vivian Girls" affect my art too much. I just want to write and record music I like and that comes naturally to me. So I guess the audience is not so much a factor to me.

You were one of Rolling Stone Magazine's "Artists to watch." Was that validating for you? Was it intimidating?
Ah, that was very nice of them! I guess I enjoy all positive feedback, especially from well established sources. I wouldn't say it was intimidating, but it's always nice to know there are people who support what you do and want to see the best for you.

I believe you have a background in the sciences. Does that ever play into your art, or are those two worlds just too disparate to cross?
Yes, that is true. I have a Bachelors in Physics and a Masters in Physics Education. Neither of these degrees have helped me so far in my music career, but I'm actually starting to expand my goals and plan on doing more work in other fields. I can't share information on a project that I am currently working on, but I will definitely be using my education a lot more in the foreseeable future. Also, I am going to be a regular video game reviewer for a popular magazine starting in February, so my nerdy side will definitely be revealed.

The blog hype world can be whimsical and alternatively cruel. Vivian Girls were both benefactors and innocent victims of the whims of the web. Do you fear the same vicious cycle striking out against your solo work?
Honestly, I don't expect the same sort of hype/backlash cycle that Vivian Girls experienced. I think that only tends to happen to musicians that start out relatively unknown and are thrust into the spotlight really quickly…after these past couple years, I feel like people have a general idea about me and what I do. If I was seeking a hype/backlash cycle, I would have made a rap album or something.

You are also in a Slits tribute band. Can we just get some quick love for the inimitable Ari Up?
She was a whimsical woman, and I am so happy that I got to participate in a Slits cover band. One of the best parts of the experience was all the other amazing women I got to become friends with in the process. I got to play with some really talented female musicians in LA.

Are the Vivian Girls still a band? Tell me it isn't the end, I just can't bear the pain!
Yes we are still a band! We are just taking some time off to work on other projects and endeavors.

Any last comments?
My Xbox gamertag is "KickballKatyy"- that's with two "Y"s. See you on Modern Warfare 3 or Battlefield 3!