Melodic death metal pioneers In Flames are back with a full North American tour promoting their newest album Sounds of a Playground Fading. Punknews interviewer Jason Epstein sat down backstage with singer Anders Friden to chat about the tour, the album and more.

How's tour so far?
Greatâ¦weâre at the third from last [show]. Itâs good. Itâs gone extremely fast I would say which means we had a good time. Itâs been almost 6 weeks now. 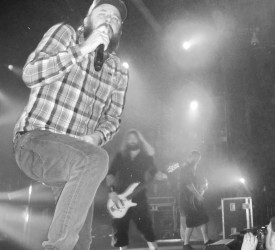 Do you ever feel like as the tour goes on youâre getting more and more worn down or more used to life on the road?
Iâm very much used to life on the road, but we all have bad days. [And sometimes] you wake up and say, "Shit, this is going to be excellent". For the most part 99 out of 100 times itâs the best job you can ever have and the day could suck but as soon as you get on stage itâs awesome. We try to walk around and find things to do but yeah I have a bad day here and there.

Do you ever listen to any of your own music youâve put out in the past?
Yeah, that can happen. Some of the old stuffâ¦rarely I go home and say, "Iâm going to listen to this for fun," and listen to a whole album. But sometimes, yeah.

Do you ever wish that you could sing and write lyrics in your native tongue?
Well I can, but I donât want to. I donât want to limit myself; I want to reach as many people as possible. Not for the sake of reaching them, but to make myself understood. If I did it in Swedish, Iâd have Swedish people [only]. Maybe something in the future, for the fun of it. But itâs highly unlikely in In Flames. I probably should do something on my own or with another band in that case.

When youâre in Sweden do you ever feel like, "oh, maybe they would rather hear something in Swedish"?
Never crossed my mind.

Is it surreal to be in Sweden, singing to Swedish people in English?
No, itâs so common. The English language is part of our lives for such a long time. We had to learn it in school when we were really really young. We donât have dubbed movies like they have in Germany. We have subtitles [on American movies] instead so itâs nothing strange.

So when you started your musical career you already knew English well?
Yeah I mean we have English around us all the time; English magazine, news, TV, movies, all that stuff. And bands we were listening to were singing in English. So it wasnât really a choice, it just happened that way.

There seems to be a shift in style on this newest record, with some experimental tracks like "Jester's Door" and "The Attic" that take the place of what used to be melodic instrumentals. Can you tell me more about this and if itâs telling of a new direction for the band?
Those songs were needed for the album. When we started writingâ¦the song order we kept through the whole process from the writing stage to the pre-production to the final album. And I wanted to bring the listener forward and therefore you have to have some sort of breather somewhere instead of doing fast, fast, fast, fast because that gets old after a while. And these songs are there for that reason and itâs not like weâre going to do another album with only those kinds of songs. We always had some songs that stick out from each album.

Those usually seemed to be the instrumentals whereas these had spoken word parts and had kind of like a groove to them.
We havenât written any instrumentals in quite some time so itâs just needed for the album and thatâs the way it is. Next time it will be something different.

Do you ever think you would write another instrumental?
That might happen. What do you mean you donât like what we are doing? [Laughter] But no, weâll see, whatever.

What is an interview question youâve been asked and you hate answering?
Nothing. I try to answer as politely as I can whatever question is thrown at me. Itâs your job, this is my job. I cannot say anything about it. You need me, I need you, you know, whatever. 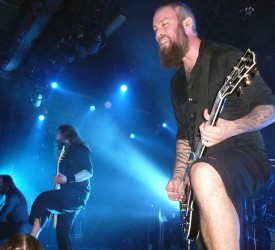 How do you feel like the new album is faring as far as the reception of it and feeling and playing it live?
Itâs great. If you stick around tonight maybe you will see.

Oh donât worry, I will.
The songs are going down really well live and they are written to be played live. In the early days we had no idea how to write songs for the live environment. As weâve progressed and become a touring band over the years we know how the songs will work from the album to a live situation.

So sometimes when youâre in the studio or youâre writing music youâll actually think maybe this part should be this way because it will translate better to a live audience?
We do have that in mind.

Are there any examples that you could tell me about?
No, itâs not rocket science. At the end of the day itâs all rock 'n roll and having a good time and music that has a good vibe and a good groove to it and good melodies. Thatâs what playing the songs is all about, really. Itâs hard to give an example because we donât think in that way. Itâs not a puzzle weâre doing, itâs a lot of emotions involved. We just go with the flow.