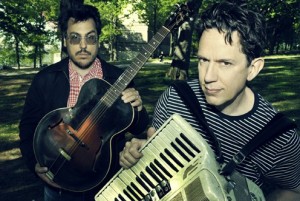 Contributed by flood, Posted by John Flynn 10 years ago

They Might Be Giants will be reissuing much of their back catalog on vinyl through Connecticut-based Asbestos Records, the label announced. First up will be the group's 1996 album Factory Showroom, which is currently available for pre-order, followed by 1994's John Henry this summer. The rest of the albums, including the band's breakout 1990 album Flood, will be announced in the coming months.

The band will be playing a trio of shows this weekend in the Northeast.