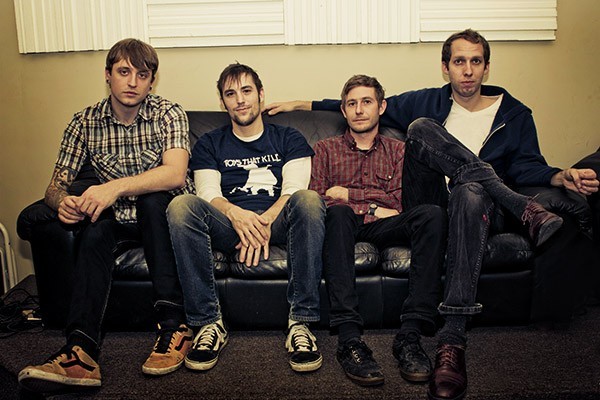 In honor of Adeline Records releasing The Thing that Ate Larry Livermore, Punknews has paired up with the man himself, Larry Livermore, to post a series of interviews between Livermore and the bands appearing on the compilation that Livermore is curating. It's one part information, one part hyper meta art project. The first in the series features Dear Landlord.

It probably wouldnât be stretching things too much to call Dear Landlord a punk rock supergroup. Its members have played or, in some cases, currently play, in such sterling outfits as The Copyrights, House Boat, Rivethead, and Off with Their Heads, yet together have developed a sound and style that is instantly recognizable as their own. Although the band originated in the Midwest, Zack, Brett, Brad and Adam now live in three different states, making it hard to play as often as they or their fans might like, but they still manage to get out on the road enough to keep the excitement building and their fan base growing. Their song "Walking Distance" kicks off The Thing That Ate Larry Livermore, and Brad and Zack were kind enough to answer a few questions about Dear Landlord and their story so far.

Youâve probably been asked this a thousand times, but I guess I havenât read enough interviews, because Iâve never seen an answer: how did you end up with a Dylan reference (I assume thatâs what it is, anyway) for a name? Youâre not exactly folksingers, are you? Brad: Yeah, itâs a Dylan reference. Not everyone in the band is a huge fan but I am. Honestly, itâs not one of his best songs or anything but with the tensions that always exist between punks and landlords, it seemed like a funny and fitting name.
Zack: I had no idea it was a Dylan reference when Brad suggested it. I just thought it sounded cool. I probably wouldn't have been into it if I'd known.

Some of you are in other bands that play a somewhat similar style of music. Do you find it difficult to keep your identities separate? Have you ever caught yourself momentarily forgetting which band youâre playing with? Brad: Not really, the other bands are pretty similar but they involve totally different people and theyâre not even local bands in the same town so thereâs not much overlap with anything. It does get confusing when someone asks if your band wants to play a show and you have no idea which band they are talking about.
Zack: I've never found it hard to keep track of which songs go with which band, but I've definitely been onstage and had the autopilot take over. It's pretty weird to look up from a daydream about Growing Pains and realize you've just played three songs without being aware of it. That doesn't really happen anymore now that I'm not touring eleven months a year, though.

So you guys live in different parts of the country, which must be part of the reason why you donât play as often as your fans might like. Does that also have an impact on your songwriting and rehearsing? How do you work stuff like that out? Brad: Yeah, it does for sure. We are really slow at getting stuff together and we canât just do a show in town when friendsâ bands come through and things like that. You end up missing the things bands usually get tired of like band practice and last minute local shows. On the other hand it keeps getting easier to be a long-distance band, instead of sending tapes through the mail you can pass ideas back and forth immediately online. So we do some stuff like that and we meet up when we can in Carbondale or Minneapolis and work on songs together. When we do end up in the same place things come together pretty fast, so that helps. Itâs not the ideal way to be a band but it works okay for us. The worst part is being slow at releasing new records.
Zack: I actually kind of like it. When we do get together, we work a lot harder than we would otherwise, I think. Things don't stagnate, which was the reason Rivethead broke up. As far as the logistics of songwriting, I'll usually send Brad some music that I've recorded on my computer and he'll fill in the words, and then we fight over whether the words fit. We don't stop until neither of us is happy with it. It's a pretty good system. Oh, and Brett writes songs, too, but I don't know what his "process" is.

What do you think youâd be doing with your lives if you couldnât play music? Or, put another way, what are you doing with your lives besides music? Brad: I think the main thing I would do is more traveling on my own. Traveling with a band is great because people will put you up for the night and all that but thereâs not much time for seeing the places you roll through. As far as what I do besides music, I stay pretty busy working stupid jobs and writing MacGyver fan fiction.
Zack: I spent years trying to be in a band that was full time and toured nonstop, and when I finally got to that point, where music was my "job," I fucking hated it. It was hilarious. I'm much happier touring three months a year and getting together to work on things whenever it's convenient. I think of touring now as getting paid to go on vacation with my best friends, and it's pretty much the best thing ever. When I'm not doing that, I'm a cop.

Is your music primarily about fun and expressing yourselves, or do you feel like have some kind of message to get across? Or are you really just in it for the money and the fame? Zack: I'll let Halfpint field that one.
Brad: I think touring and playing shows is mostly an excuse to travel around and have fun with my friends. Writing songs and recording is just something I really enjoy doing. When a song or album comes together and youâre happy with how it sounds, that for me is the reason to do it. Well, that and the millions and millions of dollars.

When was the first time you had the experience of being on stage in the middle of a show, looking out at the crowd going crazy, and thinking, "Thereâs nothing in the whole wide world Iâd rather be doing than what Iâm doing right now"? Is that the kind of thing that keeps you playing shows and pushing onward, or is there something else? Zack: I'm not sure when that first happened, but it happens a lot these days. We did a short tour of the Midwest last winter that was only a week or so long, but I felt that way every single night. Do we keep playing shows because shows are fun? I guess. That, and I like it when people tell me how great I am.
Brad: I know the first time we played Gainesville Fest was like that. That was one of my favorite shows ever. Every year Fest and Insub Fest are super fucking fun. There was a show we barely made it to in Paris where we just left the hazard lights on the van and ran into this tiny bar basement and played on the local bandâs equipment. Everyone was singing along, it ruled! I know the world is getting pretty small but having people know who we are that far from our home still blows me away. So yeah, itâs those kinds of things that make playing shows really awesome.

You were still pretty young when that whole East Bay/Gilman/Lookout thing was happening in the late 80s/early 90s. Did it have much of an impact on you, either musically or culturally? Do you feel like what youâre doing today bears any relationship to it? Brad: Oh man, I donât where to beginâ¦. Yeah, it did for sure, in every way possible. I starting going to punk shows when I was really young, around 1992. When I discovered the East Bay scene a few years later, Crimpshrine, Op Ivy, Filth, Blatz, and all the rest, those bands pretty much changed my life. Some of the first bands I played in sounded way too similar to some of that stuff. I think when you play in bands for a while you keep those early influences but they become less over the top and obvious. Between that and the 90s Minneapolis crust punk scene, I feel like I had some really inspiring and different scenes to draw from as a teenager. I think some of that comes through in Dear Landlord, I know that without those bands I wouldnât be in a band today.
Zack: Yeah, that thing was a huge deal for me musically, culturally, philosophically, etc. I'm pretty sure I can trace every bad decision I've ever made as an adult back to the moment I got the 1994 Lookout Records catalog in the mail, the green one with the aliens on it. By the way, according to this credit slip, you still owe me a Downfall record. My bands are like Lookout bands in the way that The Monkees are like The Beatles, so, yeah, you could say there's a relationship there.

I had to ask: assuming you donât own your own homes, how do you guys get along with your landlords? Brad: Right now I live in a house my friend owns so itâs a lot harder to talk shit than in the past, not impossible or anything, but way harder.
Zack: Sounds like another Brad question to me!