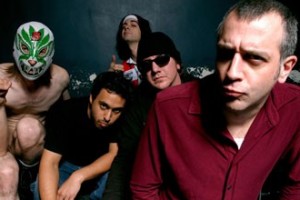 The Dwarves are spreading their filth northward. Although the Dwarves spent 2011 and most of 2012 slinging their particular brand of nastiness across the US and Europe, in a particularly egregious gap of good judgement, the organizers behind Montreal's Pouzza Fest have set the band of sexually depraved ruffians to headline one of the festival's stages.

Over the past 27 years, the Dwarves have developed and refined raunch, all while retaining a dedication to the forgotten art of actually writing a good song. 1990's Blood Guts & Pussy found the band cramming tight hooks and envelope pushing lyrics into a tight, hardcore 13 minutes. 2001's Come Clean saw the band asserting their dominance over depravity, combining their classic three chord attack with techno, dance, and musique concrete influences. 2011's The Dwarves Are Born Again featured the band ascending from reprobates to professors of rock and roll, through an unprecedented unity of nastiness and genuine introspection.

Recently, staff writer John Gentile happened to run into Dwarves lead singer Blag Dahlia while he was waiting outside of an all girls private high school. Since Blag was killing time until 2:15pm, Gentile decided to ask him about how gender relations in punk, his parents, and his favorite memories of Montreal.

Do you have any good stories or adventures of Montreal?
Yeah, Montreal is a really interesting town. The weirdest thing that sticks out is going to a bottomless Pancake House where the girls are not wearing any clothing on their lower half. I mean, you could see a topless one, but a bottomless ones?! The girls are friendly and came and sat down in the booth with us. I wonder, like, donât you even put down placemat? I hope they still have that. Hopefully the bottomless Pancake house is still there. Montreal is a great town. Thereâs plenty of sleaze and itâs just a fun place.

Why have the Dwarves managed to thrive in filth for the past 27 years while other bands have faded away?
Youâd have to ask these other people that slink out of the rock scene. Thereâs a couple culprits. You get old and tired and people get married which happens a lot, and sometimes people get a job and that job prevents being int he band. Itâs hard to keep that mindset to keep enjoying yourself. That makes rock fun. When people try to carve out an existence with all the trimmings, they wonder why they keep going on the road. So, then, I agree, which is, when you sanitized all the fun, why bother?

Thinking about the filthiness of the dwarves, what do you parents think of the Dwarves?
They went to their first Dwarves show just about maybe a year ago. They had never been to see me play and they really enjoyed and people were really nice to them. They got to see the fun and enjoyment. The previous 30 years was them fearing and misunderstanding the Dwarves. They caught one in New York and Denver. Hopefully theyâll never be at one at that gets really out of control…

Your parents had somewhat of a musical background, so Iâm surprised your parents were so hesitant to jump into the Dwarves debauchery.
Who would want to be in a rock band that your parents like? My dad refers to everything with a guitar in it as "Cowboy music." So, Elvis Presley is cowboy music and and so is Marvin Gaye. But, my father is a great lover of music and he has 10,000 of old music sheets. He loves to play the old songs, and that is what I grew up on. Thatâs why a lot of people in rock and roll suck and I donât. I know what goes into the Great American Songbook. I took that and ruined it.

One thing that I think makes the Dwarves so unique, is the ability to tie comedy and sex into the music itself, but still make "serious" music. I also agree with you about the musical background of the great American song book. It seems that despite the Dwarves more dirty side, they are committed to writing genuinely "good" songs.
Whatâs funny about the music industry, is if you have a sense of humor it means youâre not talented. Thatâs why most indie rock bands, they have no sense of humor. Thatâs the same with sexuality, thatâs the same with showing nudity or discussing sex. Any of those moves make people say "itâs just a gimmick." So, by default, these most boring and ridiculous groups which are perceived as very talented and good, they must be good because their music isnât any fun. Itâs this strange inverse correlation. As the years have gone on, people are like "even of they Dwarves are full of gimmicks, theyâre songs are still great."

I disagree with you about the sexuality aspect. Take for instance, Nicki Minaj. Sheâs very sexualized and she is very popular.
I was talking about rock and roll. Now, youâre getting into another realm. The Dwarves try to encompass all genres like dance music and Hip Hop. Number one, white people tend to sort of distrust their ability to determine one group from another, so you get more meddling from the A & R, which reenforces commonality.

Two, I think the other side of that, from a black sociological perspective, a lot of people argue that sex in hip hop is an extension of people who see sex as a reinforcement of stereotypes. I happen to be a Nicki Minaj fan. She has a lot of interesting characters and i think she has written some good pop jams that encompasses the pop stuff and weird humor, and she scores on those points and sheâs a good looking girl. But, for every Nicki Minaj, you have 50 Taylor Swifts that are hiding in plain site. There are not a lot of Nicki Minajs, even though it feels that way. They are featuring one Eminem so people can feel like there is a lot of overt sexuality or satanism in music, when there really is not. If you look behind it, as long as you have the proper corporate logos, it is easier to stretch out and get to do the things you want. Itâs harder being the Dwarves who donât get to play in their reindeer games.

In general, punk rock, and especially hardcore, is very male dominated. At most pun and hardcore shows, I would say there is usually less than two females for every ten males. But, at the Dwarves, the ratio is practically fifty-fifty! Why do you think that is?
Ha! It took a long time to get there! Boy, it wasnât like that for the first 10 or 15 years. I think thatâs why we didn't get as popular as the Bro Southern California bands. I think it was a combination of unapologetic sexuality and also it was a question of writing poppy tunes that girls like to listen to. I think girls are closer to what they like. In a girlsâ music collection, youâll get dance music cause they like to dance, mellow music cause they like to be mellow. Guys use music as the wallpaper of their life. S rockabilly guy will have rockabilly and nothing else. a punk guy will have and nothing else. When I DJ, the girls love it and get on the dance floor, and the guys hate it. But, dudes cant dance to hardcore punk. I think guysâ personalities are much more tied in to how they want to be perceived, and women are more open about it. so women come back to what they like at the time, where a guy always has to "show off."

Youâre playing at the Pouzza Fest, where there will be lots of other bands. At a Festival, some bands come to have a good time, and some come to blow the other bands away. How to the Dwarves approach playing alongside other groups?
Itâs a combination. I try and do things in general to have a good time. I donât want to frown about it. But, I think a healthy dose of competition is a good thing. I always look at it on two different levels. I hang out with some bands, but when we hit the stage, Iâm gonna be the best band here. Iâm gonna blow every band off the stage. Some bands donât approach it that way. I think thats how we got some quality in the band. Off stage, you canât take it too seriously. For example, in Metal bands, they donât really do shit on stage, but theyâre very into the hierarchy on the backstage, who is allowed to use what deli tray, who is allowed to stand where. I donât give a shit about any of that. But, thatâs the substance of heavy metal music. I try to blow other bands away while Iâm on stage, and hang out with them backstage, not the other way around.

Long time Dwarves co-hort Nick Oliveri is facing some serious issues right now . Do you have any comments about the situation?
Nick is a great genius. In the Dwarves he is known as Rex Everything. I just did some voice overs for his solo record. He is an excitable guy and sometimes he gets in some trouble. Some stuff I canât comment on, but what you have to remember about Nick, he treats everyone the same. Heâs gotten a bad rep for some things. If you get in Nickâs way, youâre gonna have a problem. But, if youâre cool, heâs fine. Heâs not someone you want to get on the wrong side. Iâve always been on the good side and consider myself fortunate. Heâs an amazing player and not to be treated lightly.

Any last comments?
Punknews is great. Keep telling it like it is. Listen to my radio show, RadioLikeYouwant.com. Go to the Dwarves.com and youâll see lots of dirty pictures. The video for "Stop Me" is so debauched and filthy that I canât even look at it.