In an inspired pairing, thrashers Municipal Waste and Toxic Holocaust will be releasing a split 12-inch this summer, titled Toxic Waste, via Tankcrimes Records. The split will feature two new songs from each act, and will be released as a picture disc and on glow-in-the-dark vinyl, and features art by Andrei Bouzikov, who has worked on several past Municipal Waste albums. The record is due out June 12th, 2012. 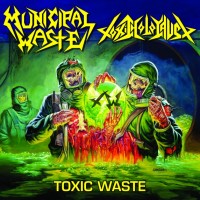 Music: Nations Afire: "I Am an Army"