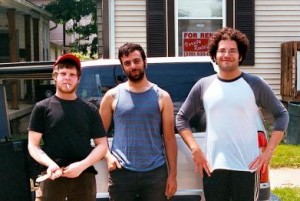 Philadelphia's Glocca Morra have announced that they will be releasing their first full-length via Kind of Like Records on July 10th, 2012. Guitarist Zack Schartz describes the album: "The album is mostly about being bummed out, failed relationships with all people, alcohol and drugs."

In addition, RCRDLBL.com is debuting a song from the record, titled "Ya'll Boots Hats (Die Angry)." You can download it here .