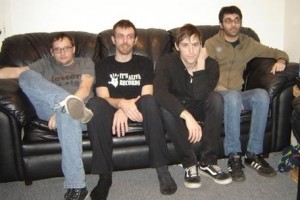 Contributed by bloatedkat, Posted by Aubin Paul 10 years ago

House Boat, the pop-punk "super group" with members of The Ergs!, The Steinways, Dear Landlord, Rivethead and others, have released their four album titled 21st Century Breakroom. Like the album whose title it parodies, the album is a concept album, but in this case a 10-minute A-side.

You can stream the EP on their Bandcamp or buy it from Bloated Kat Records.