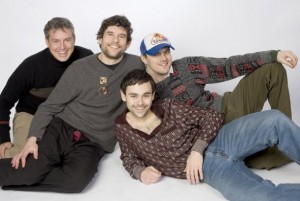 Propagandhi have announced the completion of their new full length. The Winnipeg-based political punks said this via frontman Chris Hannah:

Hello fellow confusers of entertainment for understanding [and] fun for happiness. How's it going? Our new recording is done. it shall be released late this summer [or] early this fall. A more official announcement [is] coming soon. [I] just wanted to keep you weirdos in the loop. In the meantime, you can follow me on the marginally-less-awful-than-Shitbook anti-social networking service "Twitter." i guarantee you fleeting moments of entertainment and self-reflection. Get it while it lasts.

The twitter page Chris mentions can be found here. It's mainly about politics, but there is some "dad" stuff if you squint a little .

The band's last full length was 2009's Supporting Caste, but in the intervening years they released a Split [7-inch] with Sacrifice and the B-sides of The Recovered EP.

At the Drive-In promising "exciting news"