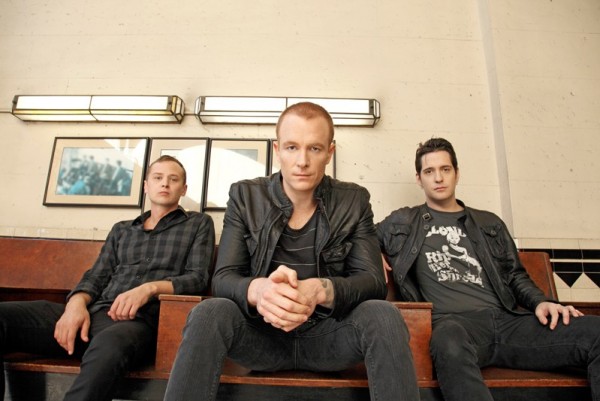 Eve 6 is doing a full tour for their first time in eight years, playing to fans all around the U.S. in support of their new album Speak in Code. It's been a whopping nine years since their last album, but with their new music and live show it seems the band has picked up right where they left off without skipping a beat. Punknews interviewer Jason Epstein sat down with drummer Tony Fagenson and guitarist Jon Siebels at Gramercy Theater in New York City before they took the stage to talk about the album, the tour and the band's future.

What have you been doing today? Tony: We did the Morning Buzz, it was a live morning show, we did Fuse, MTV Radioâ¦

Thatâs what happens when you come to New York. Tony: Yeah, but itâs awesome, hey.
Jon: Weâd rather be doing something than not.

So this is the first time youâve done a proper US tour since about 2004. How does it feel to get back to that kind of tour grind? Jon: Itâs really nice, actually. It can be a bit tiring, but being able to pack up all of our stuff and no rental gear and just be out there with our guys and the same set night after night and being able to get that tight, itâs really nice to get into the tour mode.
Tony: Itâs what weâve been building up toward in the past few years, finally getting this record out and doing an actual tour, having it all kind of mean something and not be these scattered, fly-dates which are a lot of fun and weâve had some great shows over the last couple of years but this is the culmination of everything weâve been working toward, because itâs supporting finally a new album after 9 years.
Jon: And these are just headlining club shows to so itâs really our people, so the shows have felt really good.

Yeah, instead of like a festival. Tony: Which can be fun as well but these are the hardcore fans. Itâs been a while since we were doing it in the club, these are our people, they know the album tracks, they know all four albums now and itâs a great feelingâ¦we actually had fun coming up with the set list because at a festival show you only have thirty minutes, you have to play only the most popular songs, but with this we can go a little deeper.
Jon: Get a nice, long sound check and all that kind of stuff.

So, speaking of the album, it was nine years in between your 3rd and 4th album, can fans expect a 5th album? Jon:Itâll be out before 2030, sometime.
Tony:Although the worldâs ending this year, so this might be it.
Jon: No, weâre definitely back in a record making cycle I think. Weâre going to tour this one for a while and then do another. Thereâs no break-ups this time that we can foresee.
Tony: We had to kind of take that break to go be individuals for a while. Get our heads straightâ¦it was such a whirlwind that first run, the first three records, we did it when we were teenagers and Max and Jon started the band, they were 15 or 16 in high school.. Was that like â95?
Tony: Yeah, somewhere around there. And I came in a little while after and within a year we had the first record out and were on tour, like forever. So we had to settle down from that when we hit our early to mid-20s and go do our own thing a little bit and do different music, different bands, projects, working with other artists and all that and we kind of brought all that to the table for this one. Thatâs why it took so long: we had to get all our ducks in a row, so to speak. But itâs sort of worth it because we want to do this right and have the right kind of system behind this one.
Jon: And now weâre set up with that system; weâve got a great label, management, booking agentâ¦so weâre in a place to keep it rolling.
Tony: We wonât need to do that all again for the next one.

Speaking of other projects and things like that I noticed that you decided to re-record "Pick Up the Pieces" from the Sugi Tap EP. How did you choose to resurrect that one for the new album? Tony: "Pick up the Pieces" is sort of an oldie but a goodie for us and it was just one of those songs that stayed with us over these years as Sugi Tap kind of flowed back into Eve 6 and then with Jonâs return it was just a special song to us and just one of the songs that got the team members excited about the resurgence about Eve 6, like management and Fearless Records, that was always something they picked out. So, we wanted to try to pin it onto the album and be kind of a tie to those days. And I think we did it. Itâs a great way to end the album, cap it off and sum up this crazy journey weâve been on and in a way itâs what weâve had to do as a band: we had to pick up the pieces and the whole thing had fallen into dormancy and we had to bring it all backaround. Itâs definitely emotional for me when I play it and Iâm glad it made the record.

Whatâs your least favorite interview question? Tony: The old classic when we were just getting started was "Oh, so you guys are pretty young huh?" Now, we can see that it was a valid question, but at the time we didnât really want to hear it.
Jon: Now we wish people would ask us that.
Tony: We arenât so young anymore, but I think weâre actually younger than a lot of people realize. People donât realize how young we were when that first record came out and we had that success, so we still have a little more juice left in the orange here. But, weâre glad people are conducting interviews with us, I think itâs been a long time since weâve really been doing this, so ask away.

Do you feel that the relatively low sales of Itâs All in Your Head was the reason you guys decided to cool things off for a bit or was there something else? Tony: Maybe it was a factor; I think it was really more indicative of what was going on in the industry at that time and our label. We put that 3rd record out and it was a whole different team of people there, people that werenât necessarily on team Eve 6.
Jon: That was the beginning of when all the labels started to merge and everyone was losing their jobs, illegal downloading was still at its peak and it affected us, affected everyone, affected the entire industry so I donât know if that was the reason, but it definitely made for tougher times.
Tony: You know, we had "Think Twice" on that record which did fairly well and a lot of people know that song but if we had another huge hit we might have still stopped. We really did need to refill the gas tank a little bit, so I canât really say if the relative success or lack thereof of that album was part of the break up. But you know it did pretty well, it sold like a quarter million records, so by todayâs standardsâ¦
Jon: Yeah, yeah, if we can do that on this record weâre gonna be super happy.

I say relative, because the ones before went platinum or somewhere around thereâ¦ Tony: Well with "Inside Out", we caught lightning in a bottle on that. We knew what we were and what we wanted to do, but I donât think that any one of us expected that [type of success]-
Jon:-no way, no wayâ¦
Tony: Nor did the label, management, or any of our team members. So, when you get one of those things itâs just a gift and you keep going with it and weâre grateful that we can still play that song today and have it still move people and thatâs great but it allows you to have the freedom to continue to make records and to follow your creative views which is what weâre doing with this one.