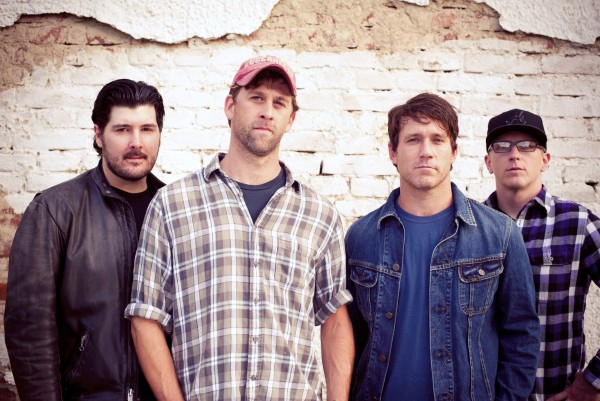 It's been years since they've done a proper tour with a new album, but Hot Water Music is back in action with their new album Exister , a mini-headlining stint on the coasts and plans for a tour with Rise Against and The Gaslight Anthem later this year. Punknews interviewer Jason Epstein sat down with bassist Jason Black to speak about the hiatus, Exister and the band's plans for the year and beyond.

Hot Water Music has done a lot of mini-tours since the last hiatus took place. What kept the band from coming back together full time until now?
I think a lot of things. Nothing particularly juicy or exciting, but mostly everyone's schedules. Everyone had their own thing going on or still does, so everyone was a little reticent to give up total control over their life 'cuz itâs a lot of compromise being in a band. But we just tried to be super organic about everything, just let it naturally happen as much as possible. Weâve been playing showsâ¦it ended up being [on] a regular basisâ¦enoughâ¦and we were sort of like, "Well, if weâre gonna keep dong this we should probably do a record." For me it started to feel a little bit like a state fair band where were like, "Oh, weâre gonna bringing out the old tunes again," and weâre always kind of interested in forward movement, so playing the same songs over and over again [the last of which are] from a record that came out 8 years ago gets really boring. It was a little bit out of necessity, but weâve been talking about doing a record the whole time since weâve started playing shows again. We just hadnât committed and gotten it all lined up yet, but we kind of pointed at the calendar and said, "Letâs go do that then."

How was this past hiatus different than the bandâs first one in the late 90s?
This was a lot longer and a lot more seemingly permanent. The first one was sort of a freak out when we were kids. We didn't really know how to…being in a band isn't easy. It's not the show and the travel. All that stuff's fine. It's tiring, it's exhausting, you're away from home and that's all bad but doing any kind of creative endeavor where you work with other people that are all on equal footing, it's a totally…everything is very subjective when you have to kind of try to make it objective. It's a lot of challenges and we've all been a band for a long time and we've changed a lot as people since we started it.

We were 18 when we started it and now we're in our mid to late 30s. There's a lot of personality changes to accommodate and try to keep everything cool It's kind of like if you meet up with your friend from high school now it's like, "That was kind of a weird dinner, I haven't seen you in eight years." So, people change over the course of their lives. The first one is just kind of a spaz freak out and us needing to take a couple months off from tour. And adding to the situation, shows weren't really very good then. It's not like now when it's kind of a career situation, so there's more a stake now. I mean the last one was a little more like we need time apart to reassess the situation and re-assess ourselves more than anything else. So, not for dissimilar reasons but this one took longer because we were all at an important point in our lives as people.

Thereâs a lot of raw energy in Exister, what brought about the prevalence of that type of sound in the album?
I think itâs something weâve always wanted to do. Weâve always wished we could really record…if there was just a way to record how we play liveâ¦which sounds really simple but just isnât. Itâs kind of hard to get a good basic recording these days withoutâ¦itâs too easy and thereâs so many tools at your fingertips in any studio, pro-tools and all that that you can just get caught up in that sort of thing, especially when itâs new. I think a lot of [how well the record came out] is just the way the Blasting Room operates. A part of it is the songs; I donât think the songs necessitate any sort of studio kind of trickery. Thereâs stuff on the record but nothing real crazy and that was sort of the attitude that Bill and Jason had going into it. It was like you guys sound good when you play and weâre just going to record that and make it sound really good. As far as songs and performance-wise, I think everyone was really excited to be making a record. Weâve been really happy with the songs the whole time. It came through the whole vibe.

It definitely shows. I know it might be too early to tell but can fans look forward to another new album in less than eight years?
Oh yeah. Unless something really weird happens. So yeah, too early to tell. But no, when we signed with Rise we signed on for two records. So even though we haven't really talked about it yet we were all like we want to go back to the Blasting Room. That was awesome and we all knew we were committing to two albums. It might be two years instead of one or whatever but I think we have a lot of songs that didn't make the record that we didn't record so there's already a pretty good jumping-off point for working on more stuff.

Can you tell me about the live album you have slated for release later this year?
Yeah, we recorded it…it's the same as the Live in Chicago 7-inches, it's from the same two shows. I don't think there's any repeats on the record…I think we did enough that it's all new stuff on there. That's kind of all the details I know. We started talking about it and haven't confirmed a release date or format or anything like that. I think the avenue were going with is doing a limited vinyl release…just making it kind of cool. Not so much, "Hey, it's this giant live record," again…we've already done one…there's the live 7" series…there's a lot of live stuff out there from us but we recorded so many songs and the recording actually came out really well and I think enough people want us to do something that we'll do a limited vinyl thing or something like that.

How about iTunes?
Yeah, yeah maybe. I mean I want it.

The Exister artwork is pretty awesome. What was the inspiration for that kind of aesthetic?
Well we just asked our friend Richard Manino…we talked to Scott Sinclair who did all our past artwork and he was too busy…so we passed it along to Richard to see what he came up with and that was literally just what he came up with and then from there we just kind of had our input and fine-tuned it ourselves. It was more his inspiration from the songs than ours for sure.

It fits it really well.
When we saw it…the first thing he sent over was just the pencil sketch. And we said, "That's really cool, I want to see how that ends up man." And we talked about just the tone of it or whatever as far as the colors…and he sent us five or six different options and we were all kind of unanimous that we liked it.

Whatâs your least favorite interview question?
Well the new least favorite one is when people kind of try to get us…when you can tell people are trying to get a little…like, "What do you think about Chuck's solo career?" or "Do you like that last Ship Thieves record?" I'm just thinking, "These dudes are my best friends, why are you trying to make me argue with them in an interview when they're not even here?" It's lame. But I don't get too much of that stuff. I don't know, there's a lot. I mean, I just don't like anything that's always digging for dirt or digging for a negative reaction. I think everyone gives enough of those naturally. They don't really need to be documented. The craziest tour story is always one…

It's not crazy after you tell it a thousand times.
Yeah, I was 18 and I did really dumb shit like everyone does when they're 18. Are you really gonna make me tell me that? C'mon. And it's embarrassing. And it involves people that are here that I shouldn't drag into it. That kind of stuff. The flashy gossip page stuff is kind of annoying. But whatever, don't get it too much so it's not a big deal.