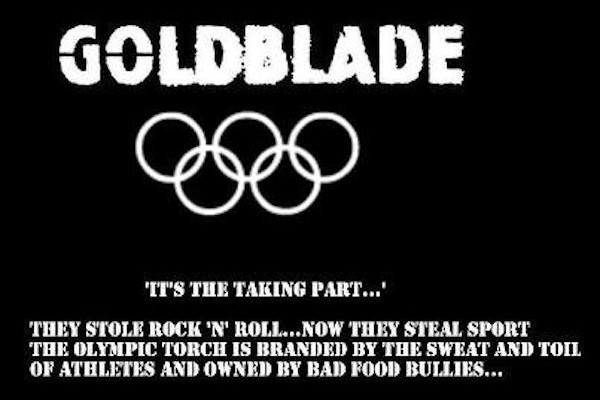 by Andrew Waterfield Politics 9 years ago

Longstanding UK punk band Goldblade are to release a t-shirt criticising the Olympic games in their current form. The shirt's design, below the Goldblade logo and five rings in the Olympic style, reads as follows:

They stole rock 'n' roll… Now they steal sport. The Olympic torch is branded by the sweat and toil of athletes and owned by bad food bullies.

John Robb, the band's frontman, announced the design via Louder Than War, the music site he runs, yesterday.He outlined the thinking behind the shirt thusly:

Because we come from the time when the Olympics was about taking part, or thatâs what we were brought up to believe- I have no problem with the athletes making millions- they put everything on the line to compete and I respect the ones that came last as much as the ones that come first- anyone who gets in a gym and trains is getting my respect.

Like many Iâm getting a bit uncomfortable with the corporate bullying and a tiny bit baffled with what sport benefits there are in coca cola and McDonalds. Maybe Iâm missing something there. Not sure what the criteria are for sponsors but why not have tobacco and alcohol companies as well?

I know we live in a time of sponsorship and we all need to deal with the devil. I know itâs not the late seventies any more but there is a whiff of something ugly going on beneath the noble and valiant pursuit of sporting excellence by the athletes.

The same happened in rock n roll years ago and none of us are pure. Every day we have to do a deal with the devil and try and remain untaintedâ¦

The Blair Government passed the London Olympic Games and Paralympic Games Act 2006 as a condition of hosting the games. As Telegraph journalist Nick Pearce reports, capitalising commercially from the event if one is not an official Olympic sponsor is a criminal offence, and carries a maximum fine of Â£20,000 (roughly $31,000 US).

An article posted on the BBC News site earlier today further outlines the potential risk to traders who fall foul of the legislation, reporting that Trading Standards officers in Cardiff have seized a number of unauthorised products, including t-shirts bearing the droll but markedly inoffensive legend Olympic drinking team'.

The legal restrictions go further than simply concerning the Olympics, or the IOC's interlocking rings logo. As reported in a BBC article last month, the aforementioned Olympic legislation:

…prevents any advert or merchandise with the combination of words and symbols which could create an unauthorised association with the games.

There are two lists of prohibited expressions, with marketers falling foul if they use any two words in list A, or any word in list A with one or more of the words in list B.

The lists are as follows:

Whether Goldblade will face legal repercussions remains to be seen. We'll keep you posted on any developments in this, frankly baffling, situation.

Videos: This Is Hell: "Acid Rain"

Videos: Melvins talk 'The Bulls and the Bees'