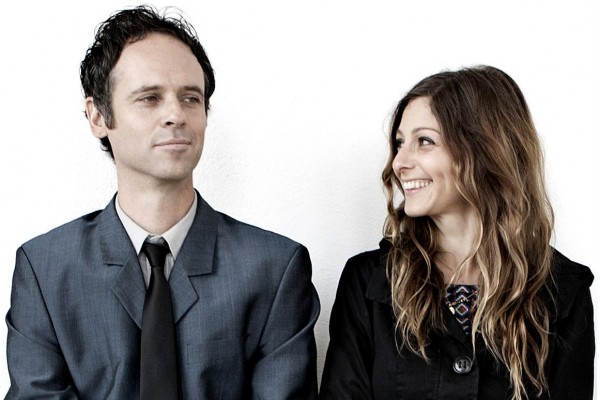 by Richard Verducci Interviews 9 years ago

To those aging punkers out there with young children, let's face it: So far, our kids aren't too impressed with our old Dillinger Four and Jawbreaker records. Sure, they're colorful and serve as questionable teething devices, but for whatever reason, "Peel It the Fuck Down" just doesn't resonate with a one-year-old. Not mine at least.

Fortunately, there is relief. Fun Fun Records--brought to you by nicest guy in punk rock, Mike Park--is a new label that features punk and ska veterans trying their hat at children's music. On October 9, 2012, Fun Fun will release Imagination by Play Date, which features Greg Attonito (singer of Bouncing Souls) and Shanti Wintergate (singer, actress).

The album isn't Greg and Shanti's first foray into children's entertainment. The couple has already released a children's book entitled I Went for a Walk, and they have been playing kid shows over the last couple years. Punknews interviewer Michael Dauphin recently caught up with Play Date via email to discuss the band, the book, and the differences between performing with Play Date and Bouncing Souls.

The story goes that you two found each other randomly in India years back. Whatâs the story there?
The short version isâ¦ Yes, we did. But we didnât know it would turn into what it has become until much later. We were both there for some soul searching and only years later did it become a romantic and creative connection. I think when youâre in such a foreign place, you can almost allow yourself to really be "you" without the expectation of who you think "you" should be. Maybe thatâs a little part of the magic that happens there.

You two now have a band, Play Date, which focuses on childrenâs music. And you released a childrenâs book, I Went for a Walk. This may be a silly question, but do you have any children? If so, how do they react to your music and the book?
We donât have our own children, but weâve got nephews and a niece and a ton of friends with kids that we also call nieces and nephews. We test everything on them first. Usually if they bop around to it or flip through the pages and respond to it, we know weâre doing something right. If they donât we know weâve got to tweak it somehow.

My kidâs only six months old, but he did want to eat most pages of the book, which kind of goes with the "hungry tummy" theme of the story. So, Iâd say you succeeded there.
Hahaâ¦ well great! And please let us know if we should send you another book. Weâre also releasing an e-book version for the iPad later this yearâas well as a narrated animation of the book. So, maybe thatâll be more durable for those hungry toddlers!

While there are plenty of kidâs books that help stoke the imagination and promote kindness, "I Went for a Walk" seems to reach into a lot of different virtues of life (i.e. equality, art, tolerance, etc). Was part of the reason of doing this book, to tie all those elements together in a way they havenât been before?
First of all, thank you. Weâre really glad that thatâs what you feel from the book. I think itâs just naturally what came out of us because itâs the way we try to live our lives. Respect for all of life, each other and all of its creatures. Understanding that weâre all different for all kinds of reasons, but thereâs a shared humanity that make us very much the same. The sense of wonder, curiosity, adventure, and imagination tied together with those values of life is what we set out to express in a playful way. We were also very aware about not creating a main "character" in the book because we want the reader to feel like itâs their journey.

Were there any specific books/authors that helped inspire I Went for a Walk?
Probably all the kidâs books weâve ever read. Dr. Seuss, Shel Silverstein, The Phantom Tollbooth, Serendipity Books, Yellow Submarineâitâs really a mash-up.

What are some of the some of the pressures or obstacles that come with writing childrenâs songs compared to your other music projects? Greg: Wellâ¦ no swearing. But beyond that, itâs pretty much the same. I guess your license to be silly getâs a little bigger. We really found that we were able to be even more creative with this music and something about it feels better because itâs not as much about "us" as individuals. Itâs for some kind of greater good. The sparking-of-collective-imagination-and-fun-with-good-sounding-music-campaign-for kids. You knowâ¦ that kind of good.

Between acting, writing, and performing music, is there a hat that feels the most comfortable? Shanti: I think I use all of them at once. Performing music that Iâve written is a bit theatrical. I have to say Iâm definitely more comfortable in the writing hat because believe it or not Iâm a bit shy. Iâm always getting anxious about performing on stage or being in front of the camera. But once I get over that itâs actually pretty fun and if Iâve done all my prep work (rehearsing), itâs just about letting go. I guess Iâm always the most comfortable with a guitar or a pen in my hands.

Back in 2006, [Greg] was involved with the Brats on the Beat compilation released by Go-Kart. Did working on that project motivate you to work on more childrenâs projects? Greg: It was fun working on that project, and then this happened in the end phase of I Went for a Walkâs creation. So, Shanti and I had already been well on our way to being involved in projects for children.

Whatâs it like going from performing to rowdy groups of punks versus children? Iâd imagine, in many ways, children are more well-behaved. Greg: Again, gotta watch the language. But in general, itâs pretty much the same. Rock out, have a good time and try to get everyone to join in. Shanti thinks the kids are more well-behaved, but maybe only because their parents are usually right there keeping things clean.

The Bouncing Souls just released Comet on Rise Records. In what ways, if any, does Comet differ from previous Bouncing Souls records? Greg: The energy behind it is urgent and clear to me. Itâs very focused, spontaneous, and feels finished sounding. All of these elements are what we try to achieve in a recording but donât always get there. A lot of BS records have these elements but not many of them have all of them. So itâs great to have achieved that with these 10 songs in a short time.

The Bouncing Souls are one of quite a few bigger-named punk bands to join the Rise roster over the last couple years. What is Rise doing to attract these artists they may not have pursued in the past? What is it that attracted you guys? Greg: The guys at Rise Records are music lovers and punk rock fans, so I think they are enjoying releasing music from bands they have loved for a long time. Their enthusiasm and spirit is what attracted us.

I noticed Bouncing Souls have been taking out a fair number of younger punk bands as tour support. Were there any bands that brought you along during your younger years that really had an impact on you? Greg: Yes, The Descendants were one. It was amazing! We were huge fans and they took us out on a Midwest tour for 10 days in â96. It was a good experience for us to see how they toured and interacted. Bill Stevenson was so excited about the new touring vehicle we had just bought: our Ford e-350 box truck called, "The White Castle." He was so excited about how we converted the inside to be like an RV. He was so excited about it the next time we saw them they had one but bigger!

What does Play Date have lined up next? I understand youâre working with Mike Park and his new label Fun Fun Records?
Yes! The Play Date record release is set for October 9th. We have a rough plan to do some record release shows on the east coast and the west coast, and weâre really looking forward to it.