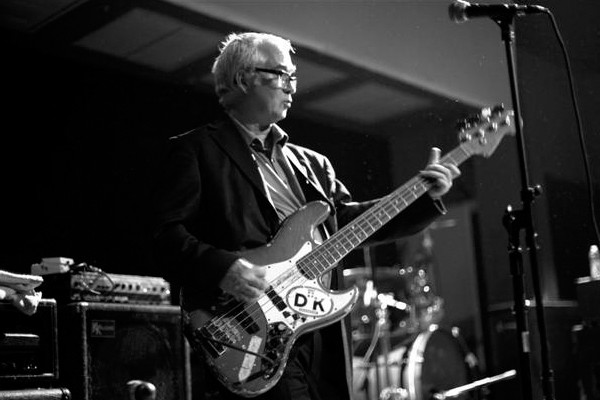 A few weeks ago Punknews ran an interview with Jello Biafra. Then we got contacted by Dead Kennedys to discuss what the band is up to these days and about a few things Biafra said. So here's an interview writer Alexis Charlebois did through e-mail with bassist Klaus Flouride before the batch of shows the band played in September and October. So far the highly influential punk hardcore band played 14 shows this year.

Dead Kennedys will be playing 10 shows with Skip McSkpister in the coming weeks. Whatâs the biggest difference between DK shows in 2012 compared to 1981?
Well for starters, weâve been playing for a while now and our playing has gotten better, so it goes to follow that our songs just naturally sound more driven and powerful. Skip is his own man and performer and has his own sense of theatre and nicely bent humor, so thereâs that too. One of the biggest differences though is the audience now being comprised of basically 3 generations. People who saw us back in the â80s and people who have never had the chance to see us before. So meeting and playing for them is a major defining reason for us to be playing.

What do you answer to people who tell you that a DK show without Jello fronting the band is not a real DK show and that itâs not even worth going to?
Well, for one thing Iâm thinking a good deal of them havenât seen any post Jello shows if any at all so theyâre only going by hearsay and usually that hearsay is from their like minded friends, so itâs a rather closed insular group all deciding along the lines of, "The cookies you get now are never as good as the ones my grandma used to make". But the answer to the question more directly is I donât much bother to tell them anything. We just play and let them decide for themselves, a good portion of them changing their minds. Actions speak louder than words.

How being a member of the Dead Kennedys back in the 80s did change your life? What was the coolest period of the band for you? Of which ââpartââ of your legacy are you the most proud of?
Itâs relative success made me more aware of the fact that not a very high percentage of people who play in bands get to reach so many others and with that brought a feeling of responsibility to deliver the best shows possible while we had a chance to do so. Not only entertaining but maybe opening a few minds to new ways of thinking (i.e. thinking for themselves) and still playing and singing as good and as hard as possible. Iâm proud that we were and are still accepted by so many people. People we get to meet and talk with after every show and share ideas with. I get to live the fantasy that so many who start playing in bands strive for and I am always aware of that.

What do you think is punk rockâs biggest achievement? Does it still have a reason to exist as much as it did back in the Reagan years?
Every bit as much, and I have to say that there are many forms and styles that can be described as "punk". I try not to limit what I accept as punk rock and punk attitude. But there are still many social and political issues that still havenât changed much from the Regan years, indeed some have gotten far far worse, a situation that is rather mind boggling.

What are you expecting from the upcoming political campaign? Will DK take a stand for a candidate?
I donât know if DK as a group will stand for a candidate, but to me the choice is obvious. I think Jello Biafra has suggested heâs voting Green Party, "to vote his conscience". I personally look at a larger picture in that in the real world we have to realize that there only 2 viable candidates and that in the long run itâs who will fill seats in the Supreme Court. It seems to me that ignoring that fact is a stance very safe for white males of privilege as the fallout of an even more right leaning Supreme Court affects them the least. The people whose lives and quality of life literally depend on the appointments are the marginalized minorities, women, and the poor. So the only really honorable option, in my opinion is to go into the booth, hold your nose and vote for who you think will appoint a justice who will and can at least help at least in the grand scheme of things.

That said, it also should be said that perhaps the worst place to make your political decisions by the advice of is a rock bandâ¦even a punk band. Take ideas perhaps from lyrics home, do some homework, investigate for yourself and then make a truly informed decision.

Do you plan on recording a new DK record eventually? Would it be as political as what the band was doing in the 80s?
Well again, if we are moved to we will. But also keep in mind that the assumption that DKâs are only a political band is erroneous. If you check it out closely, we may associated with politics only, but so many of the songs deal with personal and social issues. Getting inside of peoples heads to see what make them tick from ââMan with the Dogsââ to ââA child and his Lawnmowerââ to ââForest Fireââ and a lot of territory in between.

You asked Punknews.org to do this interview to discuss some things that Jello said in the interview I did with him a few weeks ago. From what I understand, the DK members and Jello only communicate through lawyers. If thatâs correct, itâs a very sad thing for members of a band that used to question establishment. Of course itâs a long story and we donât know everything about it but, communicating only through lawyers: how sad and un-punk is that?
Well going by the last part of your question Iâd have to say that itâs rather a slanted question which you seem to already have an answer in mind for. The reason Biafra will only talk to us through lawyers could be that heâs too embarrassed to admit he skimmed $76,000 from his fellow band mates and then lied to us about it. Thatâs what he did to Ray, DH and myself and thatâs what he was found guilty of in the trial. That said, in the early days after the trial when we found ourselves offered tours and dates to play I personally contacted Jello and invited him to put the past in the past and to come along with us to which he flatly refused in the form of a fax letter. Since then weâve again proffered an olive branch and invited him to sing on subsequent tours only to be told by his lawyers to not contact him directly, but to make all communications through his lawyer. And I agree, it is indeed a sad situation and maybe not so "punk".

So we decided, heâs not our daddy and cannot tell us what to do and took a chance on going out on the road without him and have met with enthusiastic crowds that have for the 99% as it were, were very happy to hang around and say how much they like the shows, some even saying they came in doubting but left convinced and happy to have seen a performance by DKâs that was still strong and potent and topical.

Personally, would you love to play with Jello again?
Yeah, sure. Weâd recently been invited by a premiere festival that has in the past years reunited bands ranging from Sex pistols to Portishead, to perform with the original line-up. We put forth the offer (through our manager to Jelloâs lawyer - the only route) the proposition to which we were flatly refused via his lawyer. A sad situation indeed as it would have been for fans who have, again, never had a chance to see the original lineup and fans who have followed us since the days of the Mabuhay in the 70âs. But it was apparently his choice and you canât, nor would we try, to force a person to perform. But we have to think, he plays DKâs songs, we play DKâs songs as we both have the right and desire to, so why the hell canât we figure out how to let our agendaâs go and perhaps play them together again? But I think the Cult of personality is over riding the real fact that the sum of the parts was greater than the whole and would be a gift to those whoâve supported both Jello and DKâs all these years.

Did you ever considered licensing a DK song for a commercial? Would you see anything wrong with that?
Here, once again is the ugly rearing of the big lie that if repeated enough people might believe it. We (Ray, DH and apparently myself) did not fight to do a Leviâs commercial. The opportunity was offered to us by their ad agency at a point in the 90âs and we did toss around the idea of if we did do the ad donating the fee to charities, but we vetoed the idea. And we vetoed it a full year before we found out Biafra skimmed the $76,000 from us. I think The Pretenders eventually did the spot. Now that is the only time weâve been approached for a commercial as far as Iâm aware of. So if, as Jello says weâre so, "hell bent on selling out to TV commercials" where in the hell are the commercials? There are none.

Also he claims I wrote a blog trashing him as a bad person and then asks people to not believe everything they read. I donât do blogs, and even if I did I wouldnât trash Jello in one. He did ask people to question the truth of the blog, Iâd ask him to question if the writer is who he claims to be. That, to me, seems correlation with that line of logic.

In the interview Punknews did with Jello he said that, in your heart, youâre Republicans. Is he right?
Thatâs kinda a crazy inflammatory comment and he knows it. What do you think? And so you canât claim that as a non-answer answer Iâll be serious for you and state flatly, no we arenât, and it is sort of sad that one would even ask that question in response to yet another flagrant "Big Lie" kind of statement.

Rage Against the Machine announce 20th anniversary reissue of debut