Hatebreed to release 'The Divinity of Purpose'

Hatebreed have detailed their next album and posted the first single. The record is titled The Divinity Of Purpose and is due out January 25, 2013 via Nuclear Blast in Europe and January 29, 2013 via Razor and Tie in North America.

Vocalist Jamey Jasta said this about the album:

We did enough experimenting, I think, on the last record… A lot of people really liked that record and it did gain us a lot of new fans, but on this record, with the 10-year anniversary of 'Perseverance and with Wayne [Lozinak, guitar] being back in the band - this will be his second record with us - it's just fun to kind of keep with the old-school influences. I hear more Cro-Mags and Killing Time and Sheer Terror and Obituary and Bolt Thrower and Slayer and Entombed and those kind of '80s and '90s influences in there. Which is fun for us, because we emulate the bands that we love. We try to make it our own sound and make it our own style, but at the end of the day, we're just fans of those styles of bands 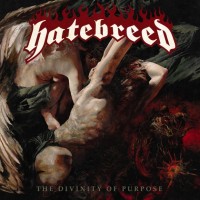