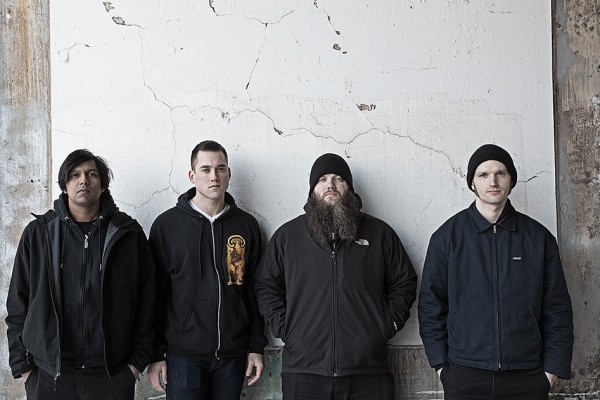 Hailing from the Pittsburgh area, Complete Failure are a band that take their music seriously, but find balance by injecting some smart and subtle humor. The band play what could be defined as grindcore, but to stop there unfairly cheapens the listening experience plus comes with a number of preconceived notions. Much of their latest release, The Art Gospel of Aggravated Assault, never lets up and pushes listeners to examine their existence--all at the speed of a runaway train. Punknews staff interviewer Andrew Clark spoke with vocalist/lyricist/graphic designer Joe Mack about the band's work, Pittsburgh DIY, and sources of creativity outside of music

Please introduce yourself and your affiliation with Complete Failure for the readers if you donât mind.

Iâm Joe Mack. I do all of the vocal recordings, lyrics and artwork.

According to what I have read about you and the other guys, you are based in Pittsburgh, a city that seems to be experiencing a renaissance as of late when it comes to hardcore and other subgenres. Is there anything in your opinion that influenced your decision to begin Complete Failure and take the musical direction you have? I mean there are a lot of choices out there when it comes to styles of music.

Pittsburgh has a wellspring of music people and music style. Itâs very artistically developed and full of that kind of culture. All of us came together within it obviously. I think it was punk shows and DIY shows here in the city. But as far as our sound and what comes out of it, there was no conscious effort to build that sound prior to what would happen on recording. The sound kind of developed itself for us.

Do you feel like your work fits well with the scene emerging in Pittsburgh and in neighboring communities? I admittedly know very little about western PA DIY scene so drop some knowledge on me.

There are some really great communities that all tie together pretty nicely. Thereâs a few small online communities that help one another pretty well and there are also groups of people that seem to orchestrate the house/basement/garage thing that stick together. They all seem to branch from a pretty solid rooting of people affiliated with the Roboto Project. After being around for a good while and helping where weâre able, weâve been pretty well accepted in those small circles pretty comfortably. Weâve considered that our "paying the dues" and respect it very much. There are also a few circles outside the city that talk to us every once in a while.

Are there any local bands that readers should be aware of or ones that you are looking forward to possibly touring with this year?

If we could turn to your latest release The Art Gospel of Aggravated Assault and pick your brain a bit, what inspired the title? Seems pretty relevant in light of what appears to be an unending cycle of violence around us.

It has to do with [the] iconic purple heart on our cover, the people who live and worship themselves and the precious seconds in front of them, and the will to neutralize with a voice or with art or a band or even an assault weapon.

When I got an opportunity to check out the lyrics I was really struck by a common thread throughout them that hints at an existential approach to life. Would you agree or am I totally off course? [Laughs.]

Spot on. The songs are about personal happenings, but I guess if you would gather a general theme, it would deal with preaching on behalf of those who are real life and human, and care and love every breath they take and the availability to love freely and fuck without guilt and kill without remorse. It's for those who worship themselves, right here and aright now.

The song "Head Hanger to Be" resonated most with me on both a musical and lyrical level; it knocked me back a bit. Being someone who would identify as spiritual I still wrestle with some of the stuff that comes up in this song, especially the concept of an afterlife. Did something in your life provide the inspiration for it?

"Head Hanger to Be" is about the suicidal attributes that people live with. We all either think or even threaten suicide sometimes in our lives but never really ever do it, because it feels good to do it. Weâre all comfortable with giving up sometimes. Youâre not supposed to do it all the time like some people that end up really ending their run, but every once in a while it's giving new life to yourself to kind of let go of something.

More generally, have you found people saying to you, "Man, I can relate to your music and what you are saying?" If so, how has this affected your creative process?

Iâve never heard that. Our last album was meant to be knee jerk and confusing. The Art Gospel of Aggravated Assault was the first to kind of fine tune things and aim at more meaning. That would be amazingly inspiring to hear that people have dealt with the same things. Maybe itâs because nobody ever talks to us and we literally have zero friends.

What kind of things not associated with music help keep you enthused to make art? I can imagine the recording and touring routines become, how shall I say, mundane at some point.

Bumps in the road in our private lives. We have it pretty good to be alive and living here and now in America as Americans, but thereâs difficulty like this anywhere you live in the world when you have no way to provide for yourself consistently. Touring and recording are the only real luxuries in my life.

If given the opportunity to tour the world with anyone and anywhere, who would you select as tour mates and where would you head? Why? Sorry, Iâm a travel junkie and looking to move to the Persian Gulf soon so Iâm hoping some American bands would tour there.

Probably Eyehategod or Superjoint Ritual. Well Superjoint's not around anymore. Eyehategod. Integrity. I bet Slayer does things pretty well on the road. Wow. The Persian Gulf. With the prices of oil and gas today you would expect that to be the richest land on the planet, yet I wouldnât wish living there upon any of my enemies. Good luck.

On behalf of the site and its readers itâs been a pleasure to interview you and thanks for taking the time. Any last words?

Music: The Postal Service: "Turn Around"