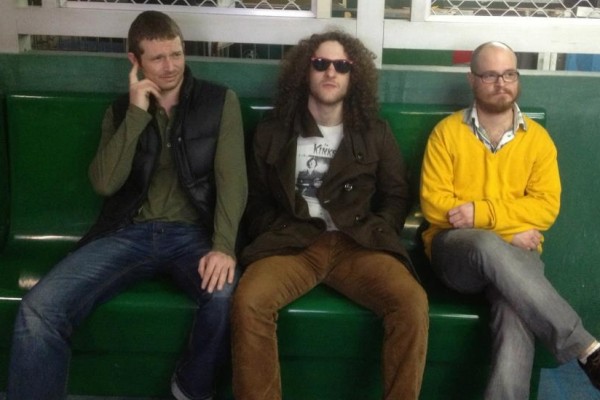 Contributed by johngentile, Posted by Aubin Paul Interviews 10 years ago

A lot of bands think that they're wild dudes because they have a song or two about hating cops. Well, if the members of Round Eye say the wrong thing, they might get carried away in the night and be never heard from again.

A group composed of five white dudes living in the orient, Round Eye combine the explosively zaniness of early rock and roll with the danger and nastiness of early 80s punk. Still in their first year, the band have toured all over mainland China, bringing a bit of the west to other expats as well as showing a new culture to young Chinese people.

In order to get the scope of the danger that Round Eye is in, Punknews' John Gentile telephoned Round Eye founder Craig Englund across twelve time zones where they talked about danger in music, censorship and smoking the herb with Greg Ginn.

"Mao Zedong likes to eat assholeâ¦ in the desert!" screams Craig Englund. He's issuing the statement for comedic effect rather than a political one, but he's also showing that he welcomes danger. You see, Englund is calling me from China, a place where they still tap phones, a place where if you say the wrong thing to the wrong person, you can still get carried away in the night.

Englund is the frontman for Round Eye, a group of expatriates currently living in mainland China. Frankly, they're a band that the likes of China have never seen before.

Although Englund cut his teeth by touring across the USA in the hardcore-influenced Libyan Hit Squad, Round Eye is both more reverent of older music and more explosive. With two saxes in the band, they often channel the frat rock freak outs of bands like The Kingsmen. But, their music is so wild and so chaotic that it often breaks into a shambled mess of psychedelia and straight up cacophony.

Take their song "Got Her Runnin" for example. Distant guitar and bass bang away in the background with a metallic edge, while wild and sloppy sax lines tear through the foreground, flirting with rhythm, but never succumbing to structure entirely. Meanwhile, Englund screams about chasing people down.

It's a strange mix, and in China, the warped music is even stranger, considering the country's history of censorship. "If there's one thing to understand about the scene out here is that it's really new," says Englund. "These guys were only able to make statements with their music just 25 or 30 years ago. They're still in a state of infancy. The kids that come to the shows, you have to play earlier, because the dorms shut down at 11 p.m. The students have very strict thinking. It's all work and very little play."

That's why when Round Eye get on stage, strip naked, and blast out wild jams that are equal parts Little Richard and The Germs, they cause quite a shock. On top of that, they have to make sure they're shocking the right people. Englund notes about how in China, you have to watch your audience carefully. "The danger involved in what you say depends on what you say and how loud you say it. If you're just playing the club circuit and keep a political stance, then Big Red won't come knocking."

"But," Englund continues, "you have to be very sensitive towards the times. When Christian Bale tried to visit [imprisoned lawyer] Guangchen, they might come knocking on his door. The times really depend on whether what you are doing is an act of sedition."

Interestingly, despite the fact that disappearing in the night is a real possibility, Englund doesn't seem overly concerned about the threat of censorship or criminal punishment (as evidenced by his dis of the Most Holy Righteous and Honorable Leader). He says, "We don't really think about that stuff. Unless you're somebody really high profile - Elton John came out here recently and had a statement about [rights activist] Weiwei at the end of his concert and it caused an uproar. They threatened to not allow any western performances over here, but it hasn't happened yet."

In many ways, Round Eye was the only route for Englund to pursue. In Libyan Hit Squad, he explored hardcore but grew increasingly bored with its sameness, and began to branch out into weirder music. Indeed, near the end of Libyan Hit Squad, Englund convinced the band to do an all avant-garde, instrumental jazz set when they opened for Black Flag's Greg Ginn.

Ginn was so impressed that Libyan Hit Squad had pushed away from the standard hardcore template that he agreed to record with them on their last recordings. While working together, Englund and Ginn smoked copious amounts of weed and talked about baseball for hours. "Now, there's a man who looooves baseball," laughs Englund.

But, after the Ginn/Libyan Hit Squad project was complete, Englund felt that he had taken the band, and even the genre, as far as it could go. "One thing that I know about punk rock is that lately, it's kind of become less dangerous. In the early 80s it was such a big issue that it was on television all the time. People were having protests. It was like rock and roll in the 50s."

"After a while, it all became so spread-out and it became a clusterfuck of views except for the aesthetic. You can like a particular sound, but you don't care about what people are saying. It's shiny and looks threatening, but is it going to do anything?"

With the limits of Libyan Hit Squad met, Englund traveled down the only available route toward more daring music: He moved to China to work as an English teacher, met up with a bunch of other expatriates and formed a rock band with two saxes.

"What we're trying to do is just bring something new to the table and boil some balls at the same time," he says. "The goal for me with the sound was the incorporation of the sax. The saxophone itself as an instrument has been stigmatized by rock and roll. The only times you hear a sax is with ska, pop or a Bruce Springsteen ripoff band."

Round Eye shows are a sight to behold, especially when they perform in front of locals. Englund gets on stage, and within moments, begins to sweat like a dog and removes almost all of his clothes, revealing his pale, hirsute body. The band rip into their frantic rock mish-mash and toss their trademark glasses- plastic glasses with actual "round eyes" printed on the lenses- into the crowd.

"People have to get over a lot of the jaw dropping," Englund says about the show. "I'm a hairy motherfucker. I look like Cousin It. I'm up there, getting sweaty, looking disgusting, having a good time. It's a real blast. You never know which ladyâ¦ or dudeâ¦ is going to enjoy the windmill!"

Interestingly though, despite Round Eye's wild and aggressive stage show, the police have been surprisingly tolerant. Whereas Ginn's Black Flag would battle the cops directly, Englund seems to take a more tactical approach. "The police come around, but they aren't exactly the most assertive people. You give them a pack of cigarettes and they'll walk away. They'll share that shit with the kids at home." I think he's kidding with the last partâ¦ I think.

Englund further presses the point that in some ways, China is less oppressive than the USA. "One thing that was very apparent to me, when I came to China, is that people speak about a lack of human rights. But, a lot of people fail to see there is a lot of personal freedom. In the States, you're in constant fear of a pig coming to tap you on the shoulder. But out here, you hardly see any police at all."

As the USA and China shoulder and tap each other for economic supremacy, Englund has seen both acceptance and rejection for being a gringo in the east. He says, "There's a lot of friction in terms of trade and the economy- who wants to be the big guy on top? There's not much animosity, but I've gotten it specifically for being American. I've been called an 'American Commodity.'"

"But, this happens all the time when people stop you in the subway or when you're trying to go to work. They just want to take a picture with you just because you're a Laowai [A term for either "always foreigner' or "old foreigner']. They're very polite. You can feel like a rockstar just going to the nearest McDonalds."

But despite the restrictive education policies it seems the younger generation is becoming more used to western rock shows, though there are local differences. Englund says, "We're doing a show specifically for the college kids. We have to play around three in the afternoon. The kids react differently. There is a shit load more of pogo-ing. There's no moshing. I came from Libyan Hit Squad, which was like people ripping the lights out of the ceiling. but here, there is dancing, like 'Top of the Pops.'"

Despite the cultural connection, Englund and the rest of the band do have to watch how they express themselvesâ¦ to certain people, anyhow. "But, we still have to choose how we say things. It depends on whom I'm saying it to. You have to be appropriate about how you say it. Unless it's a complete 'Fuck You.' Then cages can rattle."