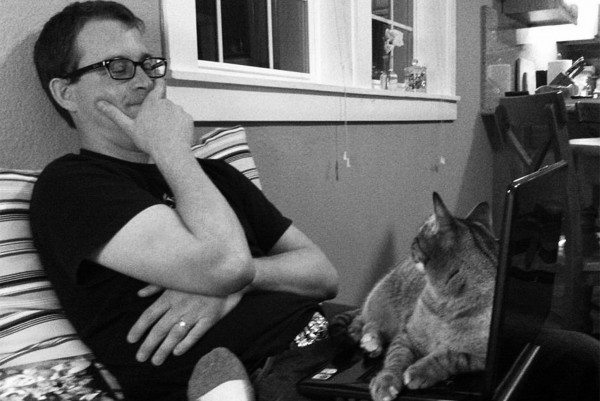 Contributed by laila, Posted by Kira Wisniewski Interviews 9 years ago

Burbank, CA's The Shell Corporation is a punk band with values and determination. From touring their band and releasing a 7-inch within only two months of their formation, to supporting causes important to them, to mixing it up creatively when it comes to their song themes and lyrics, The Shell Corporation have been a hardworking band from the get-go. And it all started with a few Propagandhi acoustic covers. Staff interviewer Laila Hanson spoke to vocalist Jan Drees about the band and its beginnings.

Can you give me a bit of background on the band for our readers who might not know too much about you yet?

We formed in LA in 2011, in May. Two of us were in another band before this called Majority Lost who probably no one has heard of. That band imploded, and within a week, we had this one started. We had already been working on songs, and were like, "Fuck it, letâs do it." We formed in May, we had our first show July 1st, then our first 7-inch came out later in July, and then the record came out in late August.

So you did not waste any time, thatâs awesome.

No, we got going immediately with recording and before we even had an official drummer, we had a friend sit in for us. It was pretty hectic in the beginning.

I noticed you have some poem references, like in the song 'Ozymandias' and your first full-length, Force Majeure is a Latin phrase. Can you talk about some of the inspiration behind these titles?

Force Majeure is a contractual, legal phrase, and it means "an act of God." Itâs usually a clause of a contract that says like, "The following Force Majeure has happened, and weâre not responsible for this hurricane, etc. etc." Itâs a get-out-of-jail-free card in the contract. We liked the way it sounded because, you know, our nameâs "The Shell Corporation," itâs kind of got this corporate motif in the name; we thought it would make a really cool title for the record. Itâs also a lyric in the last song on the record. Ozymandias is a poem originally written by Percy Bysshe Shelley. Iâve always loved the poem, and I am a very lazy lyricist. It takes a lot for me to actually sit down and write; whenever I can steal something thatâs good, Iâll do that. We had that song, it needed lyrics, and then I kind of put "Ozy" to it, and I was like "Holy crap, this actually works." I try to limit myself to once per record - only - doing that. It can get out of hand.

Does that poem mean anything to you compared to some of Shelleyâs other works?

Itâs his best, in my opinion. And I think that the political commentary in it is very applicable to today, and it really fits in with the [count], and the lyrics, most of the lyrics I [write]. Thereâs a very strong statement about hubris and empire. I think itâs such a neat message; itâs such a cool punk rock song.

Speaking of political stuff, I was looking at the FAQ on your website, and thereâs a website that Curtiss mentioned that The Shell Corporation supports, wolf-pac.com. Can you talk a bit about their ideas and why you support them?

Wolf-Pac is an organization run by Cenk Uygur, the Young Turk [co-founder and main anchor]. Basically, like us, they do a lot of complaining about how messed up things are. He decided to do something positive and proactive about it. The one area he [works on] is to get money out of politics. Thatâs a huge source of why our country is in the state it is. Money talks and statesmanship has kind of taken a backseat to that. So, Wolf-Pac is an organization that is dedicated to, state by state, get the constitutional amendment passed that will essentially remove lobby money and money in general from politics. You wonât need to raise millions and millions of dollars to get elected. The idea being that once you take the money out of it, the motivation is gone, so people who are running and winning will be running and winning because they have good ideas, or at least strong ideas. Theyâll be more of a hold to their constituents and less of a hold to the people that paid to [get them to office]. Rather than just bitching about the problem, theyâre really doing positive good with grassroots organizations to get an actual constitutional amendment passed. I think theyâve got 30 states already on board with this. The representatives are making good strides. Itâs the real deal. Cenk is kind of an idol. Heâs a really smart guy, very motivated. I really like that a guy like that is involved in something like this. Heâs not just running a crappy punk band that people like, heâs actually doing something about the problem.

Going back to some of your songs, youâve got some political songs and then the literature references, but then you have some that are really emotional that I really like, like 'Broken Hearted Loser' and 'All of the Best'. Theyâre really raw, and I was just wondering what your writing process was like with some of these songs compared to the more theme-based songs.

Good call! 'Broken Hearted Loser' is a song from an old band of mine, I think it was written in 2005. I didnât write those lyrics; a good friend of mine wrote those lyrics. He said, "Hey, I have this poem, maybe you could use it," and we put it to the music and changed it around a bit. At the time, I went through kind of a messy breakup; the words just spoke to me. Ever since then, every time I sing the song, I can feel it. The song still brings out all those emotions. The recording thatâs on the record was done in 2005; itâs an old recording. All that you hear there is totally, genuinely in the moment. I was drinking myself to death because I [was so torn up]. 'All of the Best' was written not about one particular person, necessarily. It was kind of a place in my life where I was starting to learn some important lessons about getting screwed over by people. [laughs] Putting your faith and your trust in people, being let down, and coming to grips with the fact that you canât just stop putting your trust in people; you just have to learn that sometimes youâre going to get let down, but at some point, you just gotta cut your losses and say, "You know what? Itâs been real, dude, but all the best, I just donât want to be associated with you anymore." So thatâs what that songâs about, and again, not about any one person; kind of like a mixture of three or four people that I felt that way about. I donât often write those emotional [lyric] songs. Anger is the one Iâm best at.

Weâll start with the artwork first. Thatâs our good buddy Luke Martin, who Curtiss [Lopez, guitarist] and I have been friends with for years now. Heâs just one of those friends that have more talent than he knows what to do with. When we started the band, we kind of knew…weâd like him to do the artwork, but we wouldnât be able to pay what it would take. And then he heard some of the songs, and out of the blue he sent us the album cover to Force Majeure and he just said, "Hereâs some fan art." We took one look at it and were like, "Thatâs the album cover." We had a totally different album cover at the time, and he sent us that, and weâre like "Well, thatâs the album art now!" So, every record since then, weâve asked him, "Hey, would you please do the album art?" The deal is that we donât give him any direction, and the first thing that he gives us is whatâs going on the record. So far, itâs worked out. The album artwork for the next album is the best heâs done yet, Iâm really excited. Thatâs the album art side of it. The videos are all Curtiss. Heâs a graphic designer by trade, and heâs got a very artistic eye, and a very good directorial eye. Who knows? Heâs totally the driver behind that; heâs like "Show up on this day, and weâre filming a music video." And Iâm like, "Okay." All of a sudden, I show up, and thereâs a whole office scene built up in our rehearsal space. He does all the editing and post production too. Heâs absolutely the talent behind that; it has nothing to do with me at all.

Thatâs great that you keep it in the band.

Well, weâre lucky enough to have the talent available. If it was up to me, it just wouldnât get done.

Who was the female singer in, [your new single], 'Looking for a War'?

Thatâs Nikki, thatâs our bass player Seanâs wife. I think you can hear [that] sheâs a VERY talented singer. We did a duet on a Go-Gos tribute record thatâs coming out on Solidarity Recordings. Hopefully weâll do some on the new record, we havenât decided on what yet, but sheâs too good to not put on a record.

You have a song, 'Pigs Will Pay', by Propagandhi on your split with The Mighty Fine. How did you come to choose that song, and what do they mean to you?

Propagandhi is one of my favorite punk bands. That first full-length they did, How to Clean Everything, I donât think it left my CD player from the time I was 15 or 16 until the time I was 17 or 18. It was constant. I just love the band. Actually, thatâs how this band started. As the old band was kind of petering out, I recorded some acoustic Propagandhi covers just for fun. You can find them on Facebook, at By The Way We Stole These Songs. Anyway, I recorded these three tracks, and Curtiss was like, "Dude, we need to start a band," and thatâs how the band got started. As far as deciding which songs to do, those were just the ones that worked the best acoustically.

What is the official release date for your next full-length, Mandrake?

There is none. We still havenât recorded it yet. Thatâs happening this month. [Weâre] smack in the middle of pre-production and [getting] the final arrangements done. Then itâll be however long recording and pressing takes. The CD and digital will probably be up before the LP; pressing is so backed up these days; the fact that a lot more people want records pressed than they have [time] to do it.

What are your plans once it is released, as far as touring and promoting it?

That remains to be seen. Weâll definitely be going out to Europe; weâre going to try to get to the East Coast and possibly Florida late October. Just keep doing what weâre doing. [Touring] has sort of been three weeks every other month. [Weâre] trying to get more to the East Coast, we only did that once so far. Thatâs just a really tough place to get out to because itâs so far away. We met some really good people on the last tour out there, so weâre excited to get back out there.