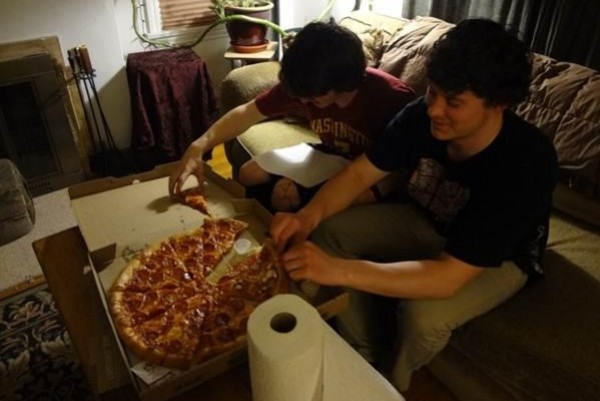 by Armando Olivas Interviews 8 years ago

The Front Bottoms are currently on their first headlining tour across North America and most, if not all, the dates have sold out. The tour is in support of their latest effort, Talon of the Hawk, which is the bands sophomore release. Later in the year the band will be embarking on a headlining tour of Europe. To say The Front Bottoms are busy would be quite the understatement.

Contributing editor Armando Olivas and photographer Jackie WIlding were lucky enough to sit down with vocalist/lead guitarist Brian Sella to chat about the band during the Santa Ana date of the tour. The duo were asked him about recent line up changes within the band, Kevin Devine, and Brian's impending debute into the WWE.

So if I am correct, this is your first coast-to-coast headlining tour?

From what Iâve seen all of the dates have been sold out or close to selling out, is that true as well?

A lot of them, yes. A lot more of them than expected have been sold out which is a pretty incredible feeling. Itâs been a blast of a tour and weâve had the opportunity to tour with Weatherbox who are an amazing band that everyone should check out.

Is Weatherbox on the whole tour?

Not the whole tour, they drop off in Denver and then A Great Big Pile of Leaves Jumps on.

The tour itself is in promotion of Talon of the Hawk and Iâve noticed in the past year or so youâve gone through a few lineup changes as far as the live show goes. Has this affected the recording process or is it still just you and Matt?

Oh no, itâs definitely affected the recording process. When we were writing this album Matt and myself wrote it but the person who was in the band before, Drew, decided he wasnât going to be able to tour anymore. Heâs an awesome guy and a good friend but just couldnât travel anymore. So we went to our good friend Cirian and asked him if he could take on what Drew used to do which at the time involved a laptop so we played to click. Cirian then mentioned he had a friend named Tom who could rip at the bass, so we were able to eliminate the laptop completely and just have more of a band feel. Theyâre fantastic musicians so that takes some pressure off of me on the stage while Iâm standing over here. These guys are going to make it sound good.

Youâre just more of a face.

Exactly, Iâm just a pretty face. Thatâs what it comes down to.

Iâve noticed the sound is more full myself as I saw you back with Drew and now it just sounds very powerful.

Especially with the trumpet. I think the trumpet is what seals the deal.

One of the main things I was most excited about playing live (on this tour) was the trumpet. All of the trumpet parts played on the last album and even the self-titled was played by Cirian but live it was played through a laptop. Itâs still cool but to have a trumpet live on stage, especially when the sound guy isnât afraid to turn the reverb up, it definitely adds something, which is exciting.

If and when possible - always go for live trumpet.

Now you were talking about good friends. Well awhile back a good friend of both of ours, Kevin Devine, covered "Rhode Island."

Totally honored too, by the way.

Now, is there a song in Kevin Devineâs discography The Front Bottoms down the line might feel honored in covering?

I would feel honored to cover any of his songs. To be totally honest, Iâm not sure how much justice we could do any of his songs. When we were on that tour with you and Fake Problems I came out and I would sing "cotton crush" which was honestly a dream come true to sing with Kevin. Sometimes he would back from the mic and it would just be me singing which is something I never imagined would happen so I guess Iâll say "Cotton Crush" or "Just Stay" which is one of my absolute favorites. Or "Ball Game." Those three are totally fucking unreal songs that I would be honored to cover.

All excellent jams but I mean the man hasnât put out a bad song.

But I would say those are highlights of his discography.

You know, we were talking about that but heâs busy.

Absolutely, two records coming out and heâs just got a lot of stuff going on. And weâre super busy too but it will happen.

Speaking about being super busy, youâre currently on tour but what is next for you guys when this tour wraps up?

Well weâre going to Europe in September and October. There is a lot of things in talks like tours that havenât officially been booked yet. Weâre trying to stay as busy as possible and just make things happen. Just lots of tours

For sure, I definitely realize I donât know if this is going to last forever but it feels good right now so why not go with it and make it happen. We just plan to stay as busy as possible and see what happens.

Is there anyone that you would like to take on tour?

Interesting. I donât know specifically but any band playing a genre of music different than what we are. I enjoy having a band that is completely different from what we are doing - like maybe a metal band. We actually discussed for a bit about maybe having a cover band come and open for us.

Exactly! [Laughs] Just something like that and maybe even a comedian or a magician.

You said you wanted to play with a band that is a different genre than yourselves; well what genre would you put yourselves in? Thatâs something Iâve noticed when I talk to people about you that they canât pinpoint

Sure. Let me thinkâ¦ I guess right now Iâve been seeing a lot of indie-acoustic-pop bands. Something like that.

Something that doesnât really exist.

Happy-go-lucky. Hmm. Maybe thatâs what it will be from now on.

The Front Bottoms are happy-go-lucky.

Are you familiar with The Aquabats?

Because they often describe themselves as aquabeat when discussing their genre of music. So the question reminded me of that. Now going back to Talon of the Hawk, I noticed you guys did a track-by-track analysis of the album for Spotify. Did Spotify come to you guys about that or how did it get set up?

It was something like this girl who works at our label named Emmy, who is super awesome, had called me up and said we should do this Spotify and do commentary for the record. Thatâs how it happened. So we went to Tomâs house, we drank too many beers and sort of had fun with it. I was so frustrated because Matt wouldnât say anything the whole time. That sums up the night: I drank too much and I was frustrated because Matt wouldnât say anything.

It was a funny thing to listen to.

And thatâs all it was meant to be.

Especially the commentary on skeleton.

Oh yeah. Sure sure sure.

For those of you who are reading this interview, I suggest that you listen to the commentary on Spotify now. Itâs pretty funny and I wonât ruin the surprise for you. I also wonât put you on the spot either.

Thank you, I really appreciate it.

We talked about Tom and Cirian a little bit before, in regards them and touring are they stable, permanent additions to the band? Or at least for as long as they are into it.

Absolutely. I feel like the me and Matt staple thing, that keeps the vibe of The Front Bottoms. You know we love each other and donât have a home; we live in the van. Itâs a great time so to be working with two talented musicians, well this is sort of what the Front Bottoms are now and they have totally committed to the idea of being poor. You know, itâs just intense to find two guys so into it. Yeah, these [guys] are Front Bottoms.

You guys have expanded your ranks like The Avengers.

Well youâre either Captain America or Iron Man, your choice.

All right, well I think thatâs it as far as questions go. Is there anything you want the readers to know?

Well Iâm trying to get in the WWE and become a professional wrestler.

You should talk to CM Punk.

Just have the label send him a copy of the album.

"Everybody say schwing!" Then everyone will say "schwing." I got a couple of them Iâm going to do. The schwinging elbow is gonna be my thing. My theme song is going to be let me see your hips scwhing. It should be a good time.

To be honest I feel this could have fit in right before the attitude era, you know the early 90s.

That was when it was a little silly back before it became a bit more serious with people like The Rock. I didnât know you were into wrestling.

You know, I got into it about two Wrestlemanias ago. So I am not 100% on all the history.

It doesnât matter whether youâre a new fan or an old fan just as long as youâre a fan.

Youâre absolutely right. The way it makes me feel is fantastic. This is sick, Iâm into this.

Now I have to ask, what got you into it?

Actually, we were in Europe and there were a lot of boring interviews. Not like this one. We were just playing these huge festivals that were just inappropriate for us to be on but still an amazing time. So we would sit in a hotel room doing interviews and we decided that we should make this fun for these interviewers. So thatâs where the idea for the Schwing was born from and I would smash Tomâs head against the table. Tom is a huge fan of wrestling and educated us on plots and storylines. Then I came home and saw Wrestlemania and thatâs where all this came from.

For example there were two people sitting on one end asking us questions. Then at the end of the interview they would ask a question just like you did they would say, "Is there anything else you want to say?" Then I would mention getting into wrestling as the Schwing and Tom would act along with us getting into a fight, which would make things super uncomfortable for some of the interviewers. Then the interviewers would plead with me to just let Tom talk. I would then stand up and tell them that Iâm the Schwing and that Iâm going to handle business before smashing Tomâs head into the table. Tom would then fall onto the ground and I would say my tagline. After that the interviewers would wrap up the interview and not seem to realize that this was just a fun thing. I think our acting skills are just that believable.

To be the tooth fairy?

Yeah, just sneak into childrenâs roomsâ¦actually, Iâm not going to continue that.

And that's a wrap!