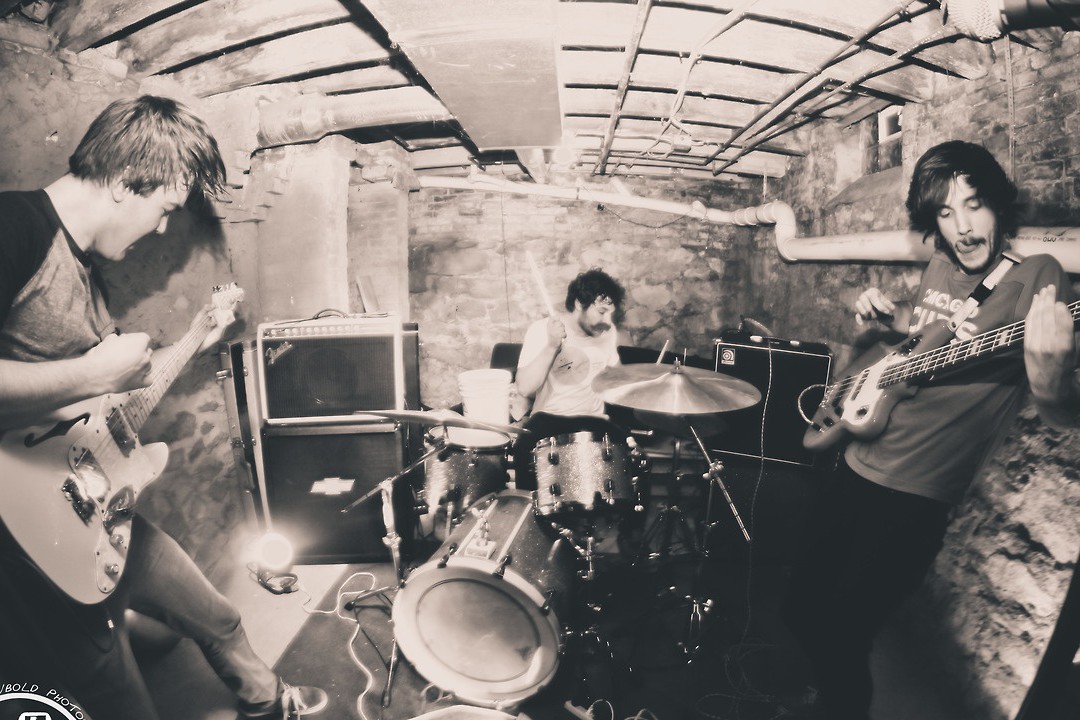 Although Tiny Moving Parts have been together for about five years the band is just now releasing their debut album This Couch Is Long & Full of Friendship via a joint collaboration between Kind of Like Records and Black Numbers Records.

The band is currently set to tour with The Front Bottoms starting today and will be playing The Fest in Gainesville, not to mention several tours in the works. The band has is illustrating with this new record that they've hit the ground running and they aren't stopping anytime soon. Hit Read More to catch Punknews contributing editor Armando Olivious chat Dylan Matheison about what it's like to be related to one another, touring with The Front Bottoms and the band's influences.

You guys seem like a fairly young band, your debut LP just came out this past week, and I only just found out about you the other day so I have to know, how long have you been playing?

Tiny Moving Parts started about five years ago. Matt and Billy are brothers and Iâm their first cousin so weâve been playing music together since we were very young. You know, high school punk bands since were about 13 or 14 and then in college or about a year before we started Tiny Moving Parts. We decided we wanted to take things more seriously and do the whole touring life.

You actually brought up my next question. I know your bandmates are your cousins so whatâs it like to be in a band with your family? Do you have a closer connection that other bands might not have?

I mean itâs a really good advantage. Even before the band back when we were toddlers we would spend every day hanging out together and weâve always been best friends. We know how to handle decisions really well and donât really argue. You know if we want to do something different we talk about it and come to a compromise. I think it works really well for us because weâve been playing together for eight or nine years. Itâs a pretty nice advantage to have weâd say.

Awesome, so whatâs the age range between the three of you?

Matt and I both graduated high school the same year so heâs 21 and Iâm almost 22. Billy graduated a year before us and he is 24. Really there was only about a year difference in high school so our friends all hung out with each other. Then we went to college and got a house together so weâve always been pretty well connected.

Yeah. Iâm actually turning 22 on July 25th and weâre playing a show at the Hoosier Dome with The Front Bottoms that day. So that will be a really awesome first day of tour.

Thatâs cool. Iâm actually friends with those guys and just interviewed them a few weeks ago. Theyâre great guys. I donât know if youâve ever played with them before but if not you guys are going to have an awesome time.

Weâve heard theyâre nice dudes so we are really excited. Weâre pretty big fans of them, too.

Oh yeah, that new record they put out is great.

That actually sounds like a fun tour. Speaking of touring, I know you have about a weekâs worth of dates with them but do you have anything in the works happening later in the year?

Well that tour is about 24 days. We spend two days by ourselves, then a week with The Front Bottoms, and then we tour the east coast with our friends in Frameworks. We were going to end our tour there but now there is another tour in the works that we might jump on but we canât announce yet because itâs not official but we plan on going to the West Coast for a couple of weeks. After that we plan to go home for a couple of weeks before touring down to The Fest in Gainesville. We might hit up Canada too and hopefully we can hit up some places overseas next year.

Thatâs rad! Hearing that you guys are coming to the West Coast is cool. I mean Iâve only been a fan for like 18 hours but Iâm hooked. So if/and when you come to California Iâll try and be at one of the shows.

Dude, thatâs awesome. I know we are spending a few days in California so we will definitely get in touch while we are out there.

Awesome. Itâs a big state so if you want to do it right you have to spend a few days out here. But yeah, weâll make something happen.

Iâm serious but letâs talk about that later. Next question is in regards to your album. Your current record just came out and you have two labels helping distribute it. You have Black Numbers putting out the CD and Kind of Like Records putting out the LP. How did you guys hook up with those labels to put out your debut?

We booked a 54-day tour across the U.S. that ended in Texas for SXSW and we ended up playing a show with Frameworks - who is managed by Lisa from Kind of Like Records. We played the show, became friends, said we should tour together and kept in touch. One of the guys had asked me if I met Lisa before and said he thought she might be into our band. Thatâs kind of how it sparked. Next thing you know we got in contact with Lisa. Weâve never met her in person before, only ever chatted in phone calls and emails but you could tell she was super nice. We felt confident in her and we told her we would put out our LP with her. She even hooked us with Black Numbers and theyâre super nice too. We essentially put all of our trust in Lisa and sheâs just helped us out tremendously. Itâs worked out really well and weâre pretty happy.

Thatâs rad. Lisa is super awesome. I know her from hanging out at The Fest and working with some of her bands like Candy Hearts & Great Cynics so I am glad to hear she is continuing to work with awesome people. She is a very cool and social person. She does great work doing PR for the bands she works with so that only helps her reputation. Now my next question is about your sound. Iâve been trying to describe you guys sonically over the past day. Maybe you could help me. How would you define Tiny Moving Parts sound?

Genre, sound, however you want to interpret that.

Thatâs always kind of a tricky question to answer. Itâs a really emotional, mathy kind of indie rock I guess but still has the punk roots. We just have the mindset of "what kind of music do we want to play every night." We just want to travel the country and play meaningful songs to people. We make songs that would have a deeper connection with people which makes for an overall better time I suppose. So I guess emotional indie math rock is what I would go with.

I feel that. Personally, when I listen to you guys some of the influences I hear are American Football, Thursday, and even early Say Anything. Iâm not sure if youâre a fan of any of those bands but those are the vibes I get.

Which is the best way to go sometimes. You donât want to sound stale or rehash too much.

Of course, itâs always nice to be a little different. Alternative in a way.

Where did the name Tiny Moving Parts come from?

Once we started we tried to figure out a band name. Well there is an album from the Circle Takes the Square, which is one of our favorite bands, and one of the songs on that album is called "Kill the Wwitch." There is a line in that song that goes "tiny moving parts make up the whole" so we went with that. We didnât love it and we didnât hate it we just decided to run with it and we still like it today, which is good because some bands grow to hate their name. And some people like it, some people hate it, it happens.

I like it. I didnât know it was a Circle Takes the Square reference, I haven't really listened to them. You know theyâre one of those bands everyone listens to that you never got into because you never got around to it but feel you should because they keep coming up.

Yeah, itâs weird. That album is such a dark album and we normally arenât into that kind of stuff but for some reason we just love that album. It is what it is I guess.

Anything else on your mind you want to talk about while I have you here?

Not really. Just that we hope to stay busy and travel all over the places and visit as many places as possible.

I feel you; I hope that becomes the plan.

I know how that is. Iâve gone on tour selling merch before and I love it. Home is cool and all but just being out on the road is the place to be. Well not the place to be since itâs not really a place but the way to go. You get to visit all your friends across the world. You know rather than seeing the same faces all the time Iâd rather see as many different people as possible. For me thatâs more enjoyable.

Definitely. Its understandable how some people canât handle the touring life because they have to leave everyone they know but for us, we are at the point where we know more people across the U.S. than in our home town. So itâs fun to see all those friends. We just love it.

Agreed, thatâs probably why I miss selling merch. Itâs probably a sign I need to go back and do it again sometime soon. With the way internet works and all the friends Iâve made touring is just the best way to hang out.

Exactly. Itâs like a vacation. Thatâs how we look at it.

Totally, itâs a work trip basically. Anywho, thatâs about it but I want to thank you for doing this interview.

Not a problem, it was fun, man.