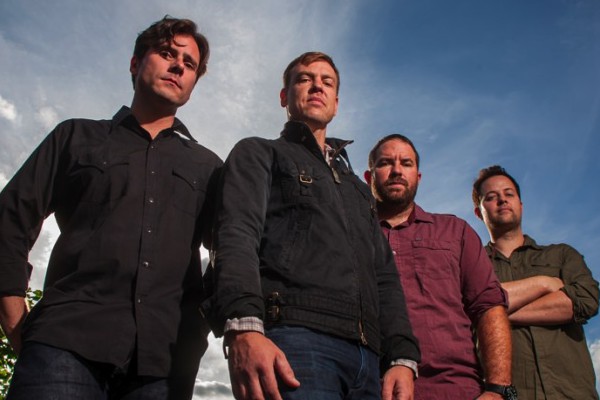 Having just released their eighth studio album Damage, Jimmy Eat World returned to the road on a North American tour to play a mix of songs, both new and old, for fans across the country. Punknews interviewer Jason Epstein spoke to Jimmy Eat World drummer Zach Lind about Damage, touring and the way that albums and songs age.

What was the biggest difference between recording your last couple of albums at the band's rehearsal space versus doing it at Alain Johanes' house?

Well, the biggest difference is when you have your own space you're not paying a daily rate. It's a pretty economical way to make records, so it's a little bit like there's not that pressure that you have when you're going out of town to record. It's just sort of more relaxed and in some ways that can be really good, and in some ways it's not so good. After making the last two records in our own space we wanted to go somewhere and record. We were talking with AJ about working with him and it sounded like a cool idea and we had never been to his rehearsal space, but it worked out really well.

Congrats on the band's 20th anniversary, it's been about eight albums in that many years, do you feel like you have another albums and another 20 years left in you?

I'm not sure, it's a good question. When you first start you don't necessarily know you'll be playing for 20 years. So, we don't want to write anything off, but we all still really love being in the band making records and playing shows. So, possibly.

What is your dream band to tour with that you absolutely already know would never happen?

Well, I guess one of the band's I would love to tour with would be REM, but that's never gonna happen. If they were to get back together though, they wouldn't have Billy Berry, their original drummer, so that's a deal breaker for me.

What countries or world markets have the band not yet cracked into or been to that you'd love to tour in?

You know, we've never done anything in Central or South America. We're going to Mexico City to play a festival later in the fall, and so that will be something that we've wanted to do for a long time. But we've still never been to South America and that's something we'd really like to do – go down there and play.

If you had to pick one song off of Damage that capture the band's current essence what do you think that would be?

Oh I don't know…I guess if I had to pick one song off of Damage it'd probably be "Appreciation." I feel like that song has kind of an interesting vibe, because there are multiple different feels in the song…like the verse and the chorus have different vibes and it's sort of a versatile song. So I guess I'd pick that one.

When we do an album, we try to do what feels interesting and not play exactly to anyone's expectations. When we're focusing on writings songs and making records I think you're better served if you're not paying attention to [outside influences], to not let it affect how we deliver it. When you're passionate about it and find it interesting as a musician, then you're going to really feel it as opposed to trying to prove something to your fans or a good label or whatever. We want to focus on what we like and what we find interesting and in the end, hope people like it.

When we play shows it's kind of the opposite, you want to entertain your fans; they played good money to come and see you play and we want to provide an experience they will like. We think that's important so we definitely want to play those songs. These songs are our songs, and we like to play them all so it's not really a chore. But we'd just really rather play songs that people enjoy and create an experience for our fans that's memorable to them.

What's something interviewers ask you that you wish they wouldn't?

Whenever people ask us about emo or about our band name, those questions are a waste. I think after like 20 years, it'd be kind of nice to not have to talk about that.

Not really. It's sort of like a scrapbook or photo book of where we are at that time, and it's kind of like looking at pictures of your kids from different ages. They're different. It's really important every time we're done making a record to have that sense of this is where the band was at this point in time. And at least we're doing what we like and what we find interesting. If we re-recorded some of our songs now I think they'd probably be better, but the thing is that people have that experience with that song the way we recorded it when we were 20 or 25 and even if we went back and re-did it and made it better and better performed and better executed, people won't like it as much because it's not what they know.

Yeah it's not that original experience.

Yeah. Sometimes we see people talk about albums online, and which ones are better than others. In 20 years I think it's natural that our sound is going to change a little bit and [make certain albums sound different from one another], so it's all good. Now we're playing a bunch of shows and it seems like Chase This Light was an album that fans didn't like as much as the other ones initially, but when we play songs from it now we get a great response. So it seems funny how it took a while after it came out for our fans to gravitate toward those songs.