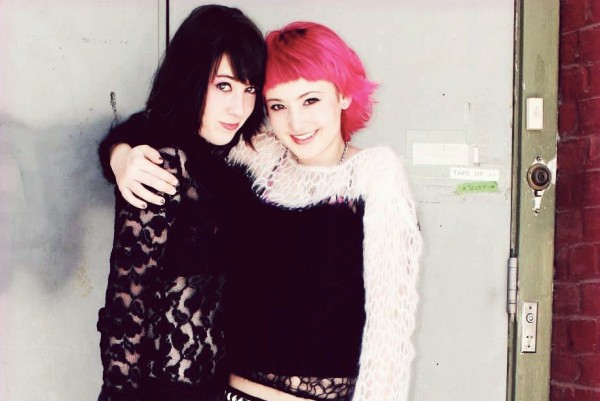 If you ain't hip to Dog Party yet, you need to get hip to Dog Party. Composed of sisters Gwendolyn and Lucy Giles, (both of whom aren't even out of high school yet) Dog Party takes one and a half chords from the Ramones songbook and one and a half chords from classic LA punk and then just completely rocks the hell out. Seriously. These gals kick out the jams.

Even though they aren't even old enough to buy cigarettes, the girls just released their THIRD album on Asian Man Records, called Lost Control. It is about their dog and it is wonderful. But, quite masterfully, like their other songs, the song is written in such a way that when really chewed over, is as mature a statement as one by a rock and roller that has been in the biz for decades. (Honestly, it's so well written that I thought it was along the lines of Joy Divison's somber "She's lost control.")

In order to get the scoop on this rising band, Punknews contributing editor John Gentile spoke to the girls about the new album, being mentored by Kepi Ghoulie, and how to start beefs with just two minutes and three chords.

What is a Dog Party?

LUCY: Um, I was 8 years old when we thought of the band name. I thought it was a really amazing idea.

GWEN: It didn't really come from any specific thing.

LUCY: I wanted the band to have the word "dog" in it because I really like dogs.

So this has been a band since you were eight?

What is the first recording that you ever did?

GWEN: That was really before Lucy was even in the band.

How old are you young ladies?

LUCY: I am fifteen.

Do you get tired of people asking you your age? Is that insulting?

So then, are you guys proud of the fact that you are young and making music?

LUCY: I am very proud.

When did you first start writing music?

LUCY: I was eight.

GWEN: I was nine or ten.

Are your parents into music?

LUCY: My parents love music, but they never played music. So, we got turned onto really cool bands. The biggest influence for my sister and I were the White Stripes. She just kind of wanted to play the guitar and I wanted to play the drums.

How did you get your first guitar?

GWEN: I played the flute in fourth grade and I just got braces at the time, so I was struggling with that. So I wanted an instrument that I didn't have to blow through. I started listening to Green Day at that time and I liked that sound, so I wanted a guitar and I got one of these really cheap ones from the music store for like $99.

How did you get your first set of drums?

LUCY: My dad was rolling through the neighborhood and saw a garage sale. There was this whole set and it was only like $100, and I got it for my birthday.

LUCY: I've noticed. I see that a lot.

LUCY: Yes, I do believe that. We have similar brainwaves.

Do you both write the music?

LUCY: We both do.

So, when you do it, do you just intuitively know what the other is thinking?

LUCY: Usually, that only happens every once in a while. Usually, we know what we want.

GWEN: If I write a song on a guitar, she'll just do the drums and it works.

Your parents are cool with the music, right?

Do you like, ever tell your dad, "Screw you, dad! I'm not gonna study! I have to go rock out!"

LUCY: No, Gwen and I are both really into school. We're both straight-A students.

Excellent! [interviewer smacks table] Good work! Give a message to the youth of today. Often, kids will say, "I don't need to study because I am going into the arts!" Or they will say "I don't have time of the arts, I need to study!" Tell the kids of today that they can do both!

LUCY: You can do both! You just have to try. I think that's the main thing. You have to try.

GWEN: In the beginning of high school, I really liked math and science. But, writing clicked for me last year, and I really like it.

Do you two get along with the kids at school?

LUCY: We have friends at school, but not everyone. Our school is pretty big.

GWEN: There are cliques.

LUCY: This is how I think of it. I enjoy punk rock a lot. It's my favorite and that's what I'm influenced. I think that we are a rock and roll band. Some people can say we're punk, but I don't personally like to say we are punk because then it will start fights. "You're not punk!" I don't want that.

So, you feel as though the term punk rock might be limiting?

LUCY: I feel that it's pretty fast like punk rock is. Some people think punk rock is like this or that. We don't really think of it that way.

Why did you two choose to cover X's "Los Angeles?"

LUCY: That was one of my dad's favorite bands. He really likes X.

Is your dad an old punk rocker?

GWEN: He was a stage diver.

Often younger people use music as a way to rebel against their parents. But, you two don't really do that because they are down with the jams.

GWEN: They are down with the jams. They are very supportive.

You two are part of Kepi Ghoulie's backing band. How did that come about?

LUCY: We met at a show. It was one of the promoters from Sacramento's birthday and he was just having a bunch of his favorite bands play and we met Kepi there. Ever since that we've been friends. There were some difficulties with his other backing band. We were playing our record release show for P.A.R.T.Y.. We were doing a show for Tom Tom, it's like an all-girl magazine. They wanted the show to be all girl drummers. We just kind of started playing for Kepi after that.

That's cool! But listen, I'll be honest. You are playing with like a 40 year old guy, which is unusual. Do you ever get any weird comments from people?

GWEN: Only on the internet. But, in person, everyone knows it's just a fun rock show.

LUCY: He's my friend. He's helping us out and it's fun and it's like the greatest thing in the world and he's amazing. There's nothing wrong with that.

At tonight's show, there was an older guy making creepy comments while you two were playing. Do you two deal with that a lot?

LUCY: At bars it's more of a problem because of the alcohol. But, it doesn't really bother me. I don't care.

GWEN: If they start talking to us for a long time, we try to leave the conversation respectfully. Not be rude about it.

LUCY: We just try to respect people and not hurt anyone's feelings and be cool about it.

What is "Lost Control" about?

LUCY: "Lost Control" was written about my dog. He's a very cute pug. His name is Terrance. AND He's crazy. He'll just run like really fast around the house like wOoOoOoOoO!

GWEN: In a complete circle!

GWEN: Then I joined and added the "Woooooo!" and the hand claps. I just picked up a guitar and figured out the notes that we were singing and before the song was done with instruments, we'd do the solo with our voices. We already knew what it was going to be before we wrote it.

LUCY: We just got back from a full US tour.

Did your parents go with you?

LUCY: Our mom went with us. And it was with Kepi.

So your mom is a pretty cool gal?

LUCY: Yeah! She likes to do merch. She's our merch lady. Thirty-six shows in 36 days.

How did you guys get hip to Mike Park at Asian Man Records?

LUCY: It was through Kepi.

GWEN: It was through Kepi because he's an Asian Man band.

LUCY: We did a show with a couple of Asian Man bands.

LUCY: He was checking us out and was like "Yo!" And he liked us.

Your lyrics seem to be incredibly mature. Why are you able you write with such sophistication?

LUCY: Some songs are silly, like "Flamingo go!" But, it's like the heart writes itâ¦ you know what I mean?

What is "Box of Handkerchiefs" about?

LUCY: I didn't really tell anyone this before, but it's about my ex-boyfriend.

Does he know the song is about him?

Did you dump him or did he dump you?

LUCY: I dumped him.

LUCY: I think he was more sad.

Does he know the song is about him?

What would he do if he found out?

LUCY: I don't know. I don't think he'd do anything. Gwen, what do you think he would do?

GWEN: Well, I mean, I know he wrote a song about you.

What band is he in?!

So, then, do we have multiple dis breakup songs going on at once?

GWEN: I don't think they put it on a record.

So, you dissed him, but he doesn't know it, and he dissed you, but you don't know it?

Videos: Stray from the Path: "Badge and a Bullet"