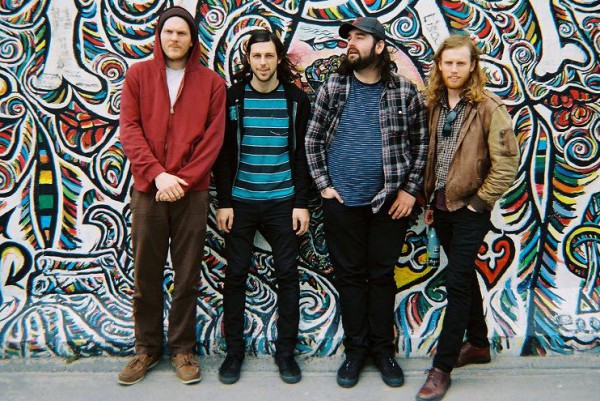 Over the past six years The Sidekicks have put out three full-length albums as well as a handful of splits & EPs - they show no sign of slowing down. The band is currently on tour with Hop Along which will last about two weeks after which they will join up with the The Gaslight Anthem for a short run across the East Coast.

Their last release was Awkward Breeds which was released in February of 2012. The band is currently working on new material set to be released sometime next year. Contributing editor Armando Olivas was able to sit down with lead singer and guitarist, Steve, to discuss a plethora of topics including, but not limited to, leather jackets, college, The Fest , and Elvis Costello.

You guys have a tour with The Gaslight Anthem coming up. How does it feel to be going on tour, opening for a band in the scene who has become so big as of late?

It feels like it would be cool, Iâm very excited to meet them. Get a chance to talk to them about playing music and how thatâs maybe changed. We actually played a show with them a long time ago, about six years ago, at the Davenport in Parma, Ohio. There was nobody there really and it was the type of place where anybody could go to drink. It was a bar in the basement of a pizza place. Iâm pretty sure they hung out in their van until they played which I donât blame them for because the place is pretty weird. It will be cool to reconvene and get to know them a little bit.

Oh yeah, that was like Sink or Swim era. So it should be nice to meet the guys and recall playing that show and play some shows that arenât so sketchy.

Speaking of them seeing some success it seems like you have been building up some momentum recently. How does it feel to have gone from a smaller DIY band that most people donât know to a more established act?

It feels really good. As a musician I think youâre always trying to find new ways to have more people hear you. I feel good about where we are at but I donât feel that this is the place to be, itâs okay but itâs just part of the constant state of being a band. Doing new things and trying to move things forward which are why we decided to play the shows with The Gaslight Anthem. Just to keep doing new things.

Most definitely, you donât want to stay in one place as a band because that leads towards you not being successful at all or if you do find success the project becomes very stagnant. Then you as an artist gets bored and neither is really a fun path to go down.

Oh yeah. Itâs been awesome that weâve been able to tour a lot more in the past year or so because weâve cleared our schedule to play a lot more shows which is really the best way to get people into our band. Just having them see us live. I think weâve sort of accepted that weâre a band that you have to see live first to really get into.

Actually, I have two questions about that real quick. You said that the band has been touring more as of late. Did the band have commitments before that you couldnât get out of that kept you from touring as often as you do now? Like work or school?

Oh cool, if I may ask, where did you go to school and what did you major in?

Cool, so are you looking to get a Masters degree or something like that later on or just trying to stick to the band?

Right now I donât really feel any sort of inclination to any traditional or professional career of any sort. I suppose playing music to some people would be a professional career. Initially I was going to school to go down the path of going to physical therapy school or something in the medical field but now the more time I spend out of school I feel like, I donât know. I could see myself maybe moving to Alaska at some point and studying something there but I donât think I want to get into any serious career stuff at the moment. Iâd rather just play music.

I feel you. The other thing I wanted to touch upon was that you mentioned you were a band that most people have to see live to really appreciate. I totally agree with that. My friend Erica, who I believe you know, was trying to sell me on you guys years ago and thought you guys were alright. Then I saw you live and everything clicked, it made sense to me. Itâs kind of funny how some bands are like that.

Yeah, there are a lot of bands like that. Like Elvis Costello is someone whose recordings are basically pop songs but when you see them live they play so fast. You start to understand why he has the reputation that he does. Almost like a punk band. The Buzzcocks are another good example because they play everything so fast live. Not that we necessarily do that but the live setting can definitely define what youâre doing. It can be an intricate pop album on recording but live they can blast through a bunch of songs quickly.

Oh yeah, I definitely get what youâre saying. Especially in regards to The Buzzcocks, I saw them live a few years ago and noticed they probably play twice as fast as they do on the record. It was almost overwhelming but in a good way.

I think thatâs historically what punk rock has been. Like if you listened to Ramones records they sound soft. Almost like soft pop records but in a live setting they almost came off as a gang. They were scary when you saw them.

Oh yeah, they had those leather jackets. They were all tough guyâd out.

It could be, you could invest in leather jackets soon.

I have a leather jacket actually but its brown. I donât think anyone is afraid of me really.

Going back to sounds, you guys released Awkward Breeds last year. Do you have any plans to release something new in the near future?

Right now we are definitely working towards writing a new record. Iâm pretty far into the writing of the record. I have enough song ideas for a full-length but we just started as a band to get all the songs together. Thatâs the plan, to have a full-length probably by spring of next year.

Cool. So you said youâre working on new music, is the stuff you have brewing in your head similar to what we heard on Awkward Breeds or are you going to branch out and change it up?

Yeah. I think weâre going to change it up a bit more. It will probably be more layered of an album and there will be more things to find when you go back for repeat listens. Thatâs just how I am seeing it right now. It will probably have a similar organic feel like the last record but with more production to it and more things going on beyond the guitars and drums. Not being afraid of recording in ways that might stray from how we play as a band. In my head I want it to have a huge cinematic feel to it. Like it has inherit meaning just in the way in sounds, something like that.

I get what youâre saying. I donât know if youâve ever heard of them but something like what World Inferno Friendship Society does.

Iâve never really listened to them. Isnât Franz who used to be in The Hold Steady in that band?

I just have never listened to them.

I think youâd be into them.

I would say something like the Flaming Lips or maybe how Stanley Kubrick uses music in a lot of his films like 2001: A Space Odyssey. Thatâs the kind of influence I am trying to draw from but Iâm not going to go hire an orchestra or anything.

I mean I couldâ¦ but yeah.

Plus recording costs get too high once you have to get an orchestra involved.

Itâs hard to say what exactly itâs going to turn out to be but I feel like weâre going to be open to just trying new techniques and things we havenât done before as a band and make sure a certain feeling is conveyed in each song.

Awesome. So you guys are playing The Fest this year and youâve played in the past so I have to ask, what is your favorite Fest experience to date? It doesnât necessarily have to be a set you played but just something that just stood out or was awesome.

I donât want to say something a bit narcissistic and talk about how awesome of a set weâve had in the past even though last year we did have a really cool set. Do you know that guy Nato Coles who plays in Nato Coles and the Blue Diamond Band?

Iâve never heard of them actually.

Well, Nato has been around for years, especially in the DIY scene and our friends have known him since they were kids in high school booking shows in Berea, Ohio. Basically we were at a parking lot in this one motel at five in the morning and kids were just playing songs on acoustic guitar. Well Nato jumps on top this car and just starts playing pop punk covers, Ergs songs and stuff like that. Even though there are tons of people there only a few are actually watching. So he is just belting out song after song after song and it was one of the most ridiculous things I have ever seen. I have a picture of it on my wall.

That sounds pretty Fest-y. Iâve gone to Fest three times and stuff like that always happens. Itâs pretty nuts to say the least.

This is the 12th fest, how many have you played so far, If you include this year? Is this your fourth?

Yeah, I think this is our fourth one

So with four Fests under your belt you know this year is only going to be even crazier, especially now that it is longer than it normally is.

Yeah I saw that. I donât know if I could hang out for that many days, it would be too hard.

Thatâs why I feel anyone doing the Pre-Fest is nuts. Thatâs six days. Normally by day three youâre already exhausted and wanting to take a nap. I couldnât even imagine being there twice as long.

Yeah but some people use it as their vacation so I understand, you just want to escape.

Well if youâre looking to escape a week in Florida for the Fest is the way to go if youâre into some awesome bands.

Alright. Do you guys have any big plans or goals you want to achieve before the end of this year or start of next year that you havenât discussed yet?

Not really, I think our main focus is finishing the album and getting it recorded. Other than that I donât think we have any main band goals right now.

[Laughs] Iâm sorry. The record is a pretty big goal.

No, youâre right. Putting out a record is a pretty daunting task and that is a big goal for a band to have.

Well, hopefully we will hear more about the record in the coming months and I look forward to its release. Thanks for sitting down with me.

Not a problem. It was a fun interview. It was nice talking to you, man.

Music: Katatonia: "The One You Are Looking For is Not Here"