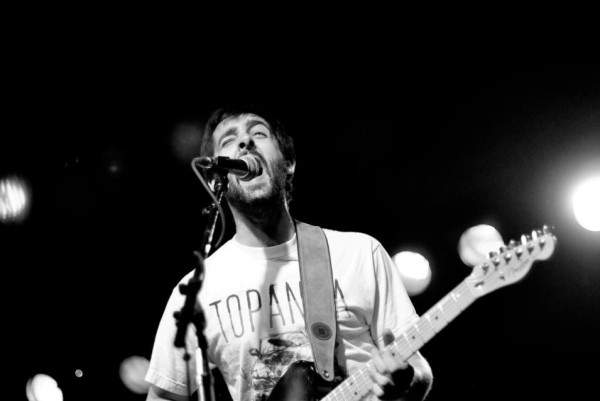 Contributed by Xanimal, Posted by Kira Wisniewski Interviews 9 years ago

Drunk-punk: a sub-genre designation for those who've left emotions at the party door, and are ready to let loose, heavily intoxicated by their never-wavering companion; alcohol. Are sub-grene's an attempt to diversify saturated scenes? Most likely. Are they relevant and worth the time? No. But, if there is one band that personifies the designation, Pkew Pkew Pkew (Gunshots) may be the best choice. Their no-gimmick, straigh- forward punk invites the listener to the party just through their speakers. Their insanely fun new record Glory Days will soon be released to the masses, and these Canadian punks are hoping you'll join the party.

Without much information on the web to give you a well rounded view of who they are, what they do and how they sound, Punknews interviewer Xan Mandell spoke with guitar/vocalist Mike Warne to gather further information, get a better sense of their recording techniques and why they chose such a hilarious name. We also got off topic for a second to talk about beer, whiskey and their legendary tolerance to alcohol.

Let's start off with some of the basics… how long have you been a band, how many tours, if any, have you been on. Who is your biggest musical inspiration, and if you could go on tour with two bands, one being serious and one being funny, who'd they be?

We've been together about two years. As for inspiration, for me would be The Bouncing Souls, that would also be one I would want to tour with. As for the funny one… I donno, um Weird Al.

So your name Pkew Pkew Pkew (Gunshots), it's a lot to say. If a friend and I were having a conversation, and we kept using the full band name, it may become too much to say… What would you suggest we use as a nickname?

Do you think there may be a time if the band became really big you'd have to downsize/adjust the name?

It's weird, because people think it's the stupidest name or they really like it. I'm in favor of that, because whenever we play festivals where no one knows who we are, we get a lot of people who come see us just because we had a stupid name. It's very searchable on the internet. When I'm talking about the band, I say different things depending on how dumb the person will think I am. Like if I'm trying to tell my grandma about it I just tell her "my band," if I'm drunk and think somebody will laugh I'll say we're called [Makes three gunshot noises]. It's a hard band to tell people about.

The debut, Glory Days, is a lot of fun to listen to… Was that the intent behind it?

Yeah, it's kind of like not supposed to be serious ever.

You've been quoted as saying the band isn't trying to do anything artsy. Would you elaborate on that a little bit?

It's more like when we started this band, it's because we were annoyed with all the bands in Toronto that were really artsy bands and really boring to watch. We never got what they were actually singing about, because everything was so artsy that it didn't mean anything, so we wanted to write songs that were as blatant as possible and couldn't really be interpreted other than exactly what they were.

Would you say that made writing easier for you?

Yes and no. Everything that you write has to be sort of… better seeming… I guess in my head, or really definite and to the point, so it's harder to come up with stuff because you're not trying to just rhyme into the next line. It's easier in the sense where we can have a song where we literally can say we like to sit around and drink beer and don't like going out.

One of the things I noticed about the band after researching is you really love beer… Have you gotten into craft beer?

We played a craft beer festival, it was good, because we got a ton of free beer, but none of us have any money, so we mostly drink cheap beer.

So then what is your go to cheap beer?

Cheap beer in Toronto is Laker. It's the lowest legal price in Canada.

And if you're in the States?

Going deep with your beer choice.

That's what I like to get when I'm in the States at a convenience store, because it's like $3-4 for a six pack of tall boys.

And your alcohol tolerance?

To get our band drunk, it's disgusting. We've played three open bar shows, and we usually bring beers just in case, and we definitely finish them. We played Gibson Guitars Christmas show at their showroom, which had an open bar, but the bar has to run out right? So we brought a 24 pack of beer just in case and kept them in the back room. We eventually got to them. We've been cleaning up a little lately though.

I was taking a look at your Tumblr and it's just a bunch of funny photos and you doing funny things. Do you think social media has been taken too seriously lately? How do you use social media? Do you think it's a vehicle to show the personality of a band rather than just, "Hey we have a show, we have a new song, we have a record…"

I don't know if any of us really like taking it seriously, because then it just seems to be really annoying. If we can just makes jokes about it all the time then we're way more happy doing that. I find as a band it is way easier to take stuff seriously when you're also making fun of it. Most of our Twitter, Tumblr and website posts are dumb ideas we have or jokes.

Tell me a little bit about your first show…

The first expectation of us, we started this band and told a bunch of people about what we were doing and our first show was massive. Tons of people came because they all thought it was a joke and they were all expecting us to be really really awful. We weren't that great, but we were much better than they thought. This was all friends, and every single one of them afterwards were like, 'that was actually really good!"

Would you consider the bands focus is just having a great time?

What would you like to see the band turn into? Do you want to be a band that sells out a 3,000 capacity room, an arena band or a cult classic?

We just like to play small shows that have a lot of people at it who are into it. We don't have any aspirations to be a huge band, but we want to play a lot, we want to tour a lot and play to 100 people who have a good time. That'd be amazing. And no stage preferably. All of our favorite shows don't have a stage.

So you like getting hot and sweaty in a basement…

I know for me, if I get drunk at a show and start moshing a lot, I'll get a little tired and have to take a break. Does that happen to you while playing?

When we're playing, we have songs where we all get really tired. We all sing all the time, and there are very few instrumental breaks in a song, so at some point it gets pretty exhausting. None of us work out or anything, so we consider it to be our cardio for the day. When we started, we would all wear light grey t-shirts so we could see who would sweat the most during a show.

I'm going to say you should keep doing that

Yeah, it's a great way to show off your disgustingness… I actually wanted to make our merch shirts that color.

Do you have a lot of merch right now?

It's actually supposed to be delivered to us tomorrow, so we have a 7-inch and we have a record and CDs and shirts that should be here tomorrow.

Have you put the shirts up yet?

So is this going to become a full time thing for you? Obviously you'll have a side job, but mail-ordering and tour and writing, that takes a lot of time out of your life.

Yeah, it does… I'm starting to realize that more lately. It's more the weird business type stuff that feels like it takes the time out of your life. The writing and everything, that's easy because it's fun, but I think we all want to start playing as much as we can because we want to get out of Toronto, because when you start playing the city your from you play every three weeks or something and we can't do that here anymore. We have to have big shows here and get out of town.

Do you have a strong following in Toronto?

Yeah, we turn down a lot of shows now because we're trying to get our shit together and focus on releasing this album and then we're going to start playing a lot more.

Do you have a distributor and a label in America or is it all Canadian?

Are you talking to anyone in the US?

Yeah, we're in the process of getting a manager and some help with the radio promotion in the States. Probably that stuff will be figured out in the next few weeks.

New Review Update: A Tribute To Tony Sly; The Swellers

Videos: Better Off: "A Fool Walks Into A Bar And Cries Wolf"