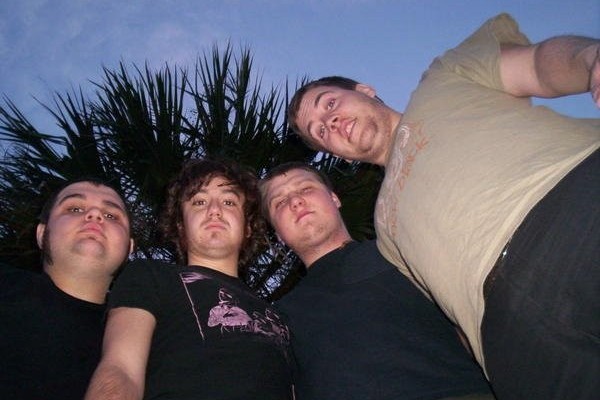 The Brokedowns are probably not coming to your town. The Elgin, Illinois band is made up of guys with jobs and kids, which prevents them from hitting the road much. They keep busy in the studio, though. They just churned out a slew of songs for a new full-length, on top of releasing two splits this year - one with Vacation Bible School on It's Alive Records and another with The Slow Death on Red Scare Industries. Punknews Copy Editor Adam Eisenberg caught up with singer/guitarist Kris Megyery to talk about The Brokedowns' penchant for putting out splits, the band's low self-esteem and why he desperately needs help with his holiday shopping.

The Brokedowns released two splits this year. How did each of those come together?

We recorded a big chunk of songs, it was two years ago, it was Christmas of 2011. It wasnât really enough songs to do a full-length, it was like, nine songs. So, we just divided that into three splits. We did the one with Wide Angles the year before, and all those bands are buds of ours so it kind of happens like that.

You seem to have a put out a lot of splits over the years. Any reason why?

We have the lowest self-esteem in the world as far as bands go, so if a label asks us to do something, weâll just be like, "oh, a split, itâs like the easiest thing to do." Itâs only two songs and itâs fun and we have a lot of friends in bands. Itâs just fun, itâs easy. No pressure.

Are there any bands you havenât done a split with that youâd like to?

Quite a few actually. I think thereâs a few in the works, down the road. We actually just finished recording a full-length last weekend and weâre already talking about other splits.

Anything you can tell us about that new full-length? When will it be out?

No idea when it will be out. Itâs all recorded, it needs to be mixed. We recorded a ton of songs, so we need to throw a shitload away. We recorded 28 songs.

So youâre set for the next few splits then?

Weâre stocking up for the winter. Weâll probably throw out at least half of that. Like I said, we have horrible self-esteem.

With Species Bender your sounds took a more melodic turn, which seems to continue on this most recent splits. Is the new stuff along the same lines?

Has the more melodic sound just been part of a natural progression?

I always feel like we start off kind of melodic and then we are too self-conscious and then we accidentally remove the melody from stuff. Itâs interesting you say that, I donât think itâs a conscious decision, itâs just how the songs are going.

The Brokedowns do not seem to play outside of the Chicagoland area very much. Why is that?

We have a strict no-leaving-Chicagoland policy. Weâre older, a couple of us have a shitload of kids, everyoneâs got jobs, stuff like that. We try to get out as much as possible, but itâs hard. Weâre going to do more this year when we have an album out for sure.

I live in Fort Lauderdale, so I still donât expect you to come here.

Thatâs got to be amazing though, donât you just lay on the beach all day and smoke weed?

That is what most people do around here.

Itâs 500 degrees below zero in Chicago.

The gray sky removes all color.

Toby Jeg said that youâre the funniest member of the Red Scare family. Howâd you earn that honor?

Heâs a funny dude himself. Thereâs quite a few funny dudes. Thatâs a lot of pressure on me. I donât know what to say. I feel like I could tell you a fart joke right now.

So you canât tell me anything funny?

I canât do that. Jesus Christ, what am I? I mean, if you got a few drinks in me I could tell you some insane stories about shitting my pants or something. That would probably be pretty funny. Iâm stuck in traffic in the city right now.

So youâll be playing Ianâs Party in a few weeks. Whatâs that like?

Oh, thatâs hilarious. That started years ago. Our friend Jim Millerâ¦ I think he was inspired by The Fest in Florida. We took him to Fest with us in Florida in 2006. He wanted to something like in Chicago, but in the winter. He named it after our friend Ian just because he knew Ian would be upset by it. I think this is the sixth or seventh one. Itâs just a shitload of bands.

We used to actually do it in the town where weâre from, Elgin, which is like 30 miles outside of Chicago, which was really funny then because people drive like 30 miles out to the suburbs for this thing. Now itâs just in the city. These things are fun but, Iâm sure youâre aware, itâs just fucking exhausting.

Iâll tell you something funny now if youâve got a second. In Minneapolis, Jesse and Dave from The Slow Death this summer decided to do something similar and they had a thing called Fuck Dave Strait Fest in Minneapolis. Iâm a dad, I have a two-year-old and my second baby was like, a month-and-a-half old, and my wife dropped me off up there, we were going up to her parent's house. So she dropped me off up there and I hadnât drank for about a month and a half, so we played the worst show we could possibly play and I stayed up for another 12 hours.

The next day I was trying to find a train, and I literally ended up in a marathon in Minneapolis. Stumbling around Minneapolis I ended up in a 10K marathon, trying to find a train. I looked like a monster and all these people were upstanding citizens who were up at 7 a.m. running. I vomited in front of the police. I fell asleep in a bus station and got hassled by security. It was like a three-hour-long nightmare.

Switching gears completely, have you finished your holiday shopping yet?

I havenât done any. Iâm horrible. I come from a family of hippy bohemians where they didnât really want to acknowledge holidays. So Iâm like an unfrozen caveman who has to be guided along by other human beings who tell me how to go through life and that Iâm supposed to buy presents for my children. This is all new to me.

On a related note, one thing I discovered in the course of doing my shopping was that every musician has a fragrance these days. If The Brokedowns marketed their own fragrance, what would it smell like?

I noticed that your Facebook page makes regular reference to that.

Yeah, heâs the Stephen Hawking of blunt wraps. Heâs going to lead us into the promised land.

Yes! Body odor, malt liquor, barbecue sauce and weed. That sounds like us.