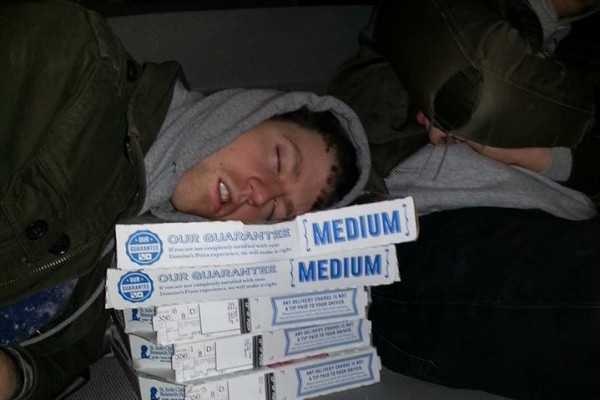 Contributed by xanimal, Posted by Kira Wisniewski No Sleep Interviews 8 years ago

Before heading out on a US tour soon with Into It. Over It. and A Great Big Pile of Leaves, Punknews interviewer Xan Mandell caught up with Greg Horbal of The World Is A Beautiful Place And I Am No Longer Afraid To Die to try and dissect the difficulties of being in a band with eight people, as well as talk about the new music they're writing.

During the discussion, Horbal said in regards to being one of the hype bands for the emo revival, "It's not even really worrying, we're kind of waiting for it to end."

It was a small, but very important statement. When a new wave of music comes around, a band that is at the forefront of it usually soaks it in, trying as hard as they can to ride it and stay at the top of their game, but not The World Is A Beautiful Place And I Am No Longer Afraid To Die. No, they're not in it to win it. They're in it for the pure joy of expressing themselves and enjoying doing so with strangers in sweaty venues. The honesty of their music doesn't just come out of headphones or speakers; it comes out of them, as human beings.

Was there a conscious effort to have that many people in the band?

It has been building to as many people as we have now for about two years. When I first joined the band, in 2011, we were a five piece. The first lineup of the band was a four-piece. Our third guitar player, Chris Teti, heâs been on all of our tours and was driving us all the time and the discussion finally came where it was like, "Fuck it, you can just be in the band, three guitarists is pretty cool." That happened right after we finished recording our split with Deer Leep. The LP itself is mostly written as a six piece. Our old singer Tom was originally playing both keyboard and singing and when he left, it was like, letâs just get a separate keyboard player. Derek started singing a little bit, then out of no where, Julia, our cello player, started recording with us, and we were like, "Oh you can play whatever shows you want. Youâre in the band!" So thatâs where we are right now. Weâre planning on having shows where weâre a 15-person band, with some horn and string sections, and maybe a second drummer. Itâs all about making a loud show.

Would you want to write for a 15-piece band?

Weâre not trying to write for one; weâre just trying to play as one sooner or later.

I just mean very heavily layered tracks with a lot of different elements to them in the studio.

Exactly, yeah, the plan is to go above and beyond with that from here on out, and experimenting with stuff that isnât in our live show. Everything is open right now. We just started writing again, so itâs going to be a while until we have a clear vision of what we want to do.

Youâre going on the road soon, is that going to interrupt the writing process at all?

Oh yeah. It is going to be real frustrating. Once weâre done with our European and US tour weâre going to not be on the road for a while and weâll be focused on writing.

Then why start writing now?

When we practice weâve already played all the songs weâre going to play live a million times. So weâre like, "Ok, letâs do this." There is always an excitement with starting something new. Weâve been writing since Whenever, If Ever was done. We have a lot of older songs and ideas that just never got off the ground around when Whenever, If Ever was done that we were like, "Hey, this is good, but this does not fit with the idea of this record," so they were shelved.

Do you have an idea as to when youâll be back in the studio?

No idea. That is a long time off, but Iâm hoping maybe fall of next year.

So a pretty long while then?

Yeah, the thing is too, weâre not going force ourselves to record if weâre not happy with what weâre making.

For the writing process, kind of everyone for themselves and then bring it together, or is there a skeleton that you build from?

With Whenever, If Ever and lately itâs been like, "I have this one idea, let's expand upon this," and there are maybe one or two exceptions to that rule, but for the most part it's everyone jamming it out, and we got the songs to where weâre all happy with it. The vocal process is done collectively as well. Then weâll demo out the song instrumentally and then record demos of vocals on top until weâre all happy with whatâs happening.

What does having eight people in the band do for the writing process?

We demo after almost every practice we have, so weâll all go back and listen and be like, "I know the flow of this," and itâs easier to hear everything thatâs going on, and from there we talk about what we want to change, then every once and a while a person -- sometimes itâs hard for everyone to show up, so we have that to show them what happened. But you know, in terms of writing, it always changes. I wouldnât say there is a set way that we do anything. Right now, weâre in the studio, kind of working on a collaboration with a friend and we didnât write or practice anything before we got into the studio, we just thought, "Let's try to experiment this a bunch," which has been a pretty interesting process. So, itâs all about just keeping a mind and trying a lot of different things.

Youâre music is pretty atmospheric and spacy. What steps do you have to take to transfer that to a live setting?

A lot of the live stuff that we do, including the interludes between songs, we donât practice that, it develops over a long period of time of live shows and getting comfortable with transitions. Sometimes youâll see us and between a song youâd think, "Ok, this transition is badâ¦" Thatâs because we were writing it then. Itâs funny where there are some songs where we know exactly what to do all the time, and there are some songs where you have no idea what is going on. You work through it though. That side of the live show is fun, because you donât know what is going to happen, so weâre trying new things all the time.

Is there a question of what key youâre going to do it in?

I donât even remember. Between some of those songs there is a long tuning break, and it is not getting there yet. We get it sometimes, sometimes we donât.

Are you excited to be playing what I imagine will be big shows on your upcoming tour with Into It. Over It.?

It should be good. My old band, My Heart To Joy, played with Evan and Into It. Over It. early on, so itâll be good to be doing this again with him. Iâve known him a long time, so it is exciting.

Iâm sure youâve heard the term "Emo Revivial" at this pointâ¦ Itâs funny to me, because it reminds me of three years ago, when pop punk became this whole big thing again and then simmered off. As a band at the forefront of the revival, do you worry about the trend fading?

Itâs not even really worrying, weâre kind of waiting for it to end. We will continue doing what we do whether Pitchfork is talking about us or not. I donât give a shit. So itâs cool that it is happening right now, but Iâm not planning on it to be here by the time our next record comes out. The crowd may be gone by then, but you expect the best and we will continue to put out as good of material as we are capable of, so I donât really give a shit.

But itâs gotta be kind of nice to get all those mentions around the Internet?

No one is complaining about it for sure, but you have to be ready for the moment those people wont be there.

I think thatâs all Iâve got for questions right now. What about this for an ending question thoughâ¦ What is a release youâve really dug from 2013?

There is this band, Special Explosion. We played with them, and Iâve never been so blown away by a band in my entire life. Their album is on Bandcamp for free download by Topshelf Records. I highly suggest checking that out.

New Review Update: You Blew It!; Self Defense Family