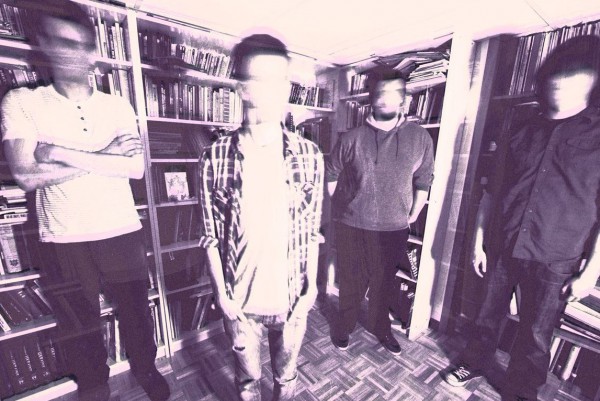 Stefan Babcock is a frickin' punk rock maniac. He fronts Pup, a band that can charge forward like Discharge, but also has the ability to pause for reflection a la Restorations or Menzingers. He wrote a song about how much he hates his ex-girlfriend (but not in like, the bro-core style… think more Billy Joel-style finesse). His grandma e-mails him before most gigs. He went to the wilderness of Canada and for three weeks, just HELLA tripped on 'shroooooooooooms!!!!

Now Pup is releasing their debut LP called Pup! It's great. It's raw. It's hard. It's nasty. But, it's also nice and introspective on some parts- everything a modern punk band should be. (I also taste the tiniest bit of Beach Boys, here and there). Some people call it "pop-punk" but what do "people" know, anyways?

Because Babcock gets down like David Lee Roth and goes on George Clinton style mindtrips, features editor John Gentile spoke to him about the new album, grandmas, and the grotesque isolation that is the great white North……..

You can click read more for the juicy bits…

Admit or deny: You used to be in a ska band!
Ughâ¦ admit.

Are you proud of that or ashamed of that, because you could take that two ways.
Well, I donât want to say that Iâm ashamed of it, because Iâm not. Playing ska music is what got me started playing music at all. I owe a lot to that scene. However, itâs not always something that I like to tell people right away. First meet- I donât like to tell people right away.

Why are people so hesitant to talk about their ska origins? It comes from one of the noblest forms of music- it comes from Jamaica, which in my opinion, has the highest talent per capita ratio in the entire world.
Yupâ¦ I would agree wholeheartedly. Thereâs no shame for me in first wave and most second wave. Itâs like this- Despite the fact that the label might be true, in Pup, we hate being called pop punk, even though it might be true. When people hear that, the first thing that they go to is stuff like Good Charlotte and No Use for a Name. In the ska world, thereâs that same sort of pigeonholing. People immediately think of Catch 22 and Streetlight Manifesto and the Aquabats. Itâs less about what the music actually is, then what the label is.

See, I donât think of Pup as pop-punk at all. It just sounds like punk to me- maybe a little grunge or Amphetamine Reptile style noise rock.
We get pop punk once in a while and I donât think itâs incorrect. Itâs punk music and itâs pop music, and there are those elements. Just like there are elements of rock and hardcore. Although the term is somewhat accurate, itâs kind of like- even if you are a pop-punk band, you hope that people donât call you pop-punk, because then people immediately assume stuff about your band.

If I were you Iâd shy away from the pop-punk tag, because to me, at times, your band sounds very dangerous and rough to me. Now, this is my baggage, and you can disagree, but do you feel that a great deal of punk rock has become too safeâ¦ too gentle?
I think that has happened. I think like any genre, itâs become watered down, just because there are so many bands playing some form of punk rock." Some of those bands become very popular, and carry the label, even though they are not punk as punk was originally intended.

I still think that there are amazing, edgy, aggressive, amazing punk bands that exist, I think recently, there has been a resurgence of bands taking that to the next step.

Is it true that your grandma e-mails you before you play a gig?
Yes! Often actually!

Whatâs it like having your grandma support your punk rock band?
Itâs amazing! Sheâs the best. Sheâs always been so supportive and itâs always great getting e-mails from her.

What does your grandma say in her e-mails to you? Is she like, "Now be good Stefan," or is she like, "Go rock the fuck out junior!"
Usually, she tells me have a good time and to rock out. She never swears and once in a while sheâll tell me not to party too hard.

How old is your grandma?
I gotta sayâ¦ early 80âs.

So, youâve got a grandma-style grandma. Now, does she understand the punk rock music?
No. Not at all.

But she understands that you are in a band an appreciates that.
She sees that we are touring the world and following my dreams and is proud of that.

Speaking of not compromising, the new record does sound like it was made by a band without outside pressure or influence.
Well, thank you. Itâs the first record and there were no expectations form anyone except for ourselves. The only people that we were trying to impress was one another. We werenât too concerned about getting on the radio or whatever. Iâm just glad that other people seem to be liking it.

What I like about the new album is that you guys have a specific sound, which isnât too clean. But, each song has itâs own purpose. No two songs sound like duplicates of each other.
Thanks very much! We really didnât want to fall into the trap of writing one good song and doing it over and over. Thereâs a lot of emphasis on trying to make each song unique. So, thanks for noticing that!

What will surprise people the most about the new album?
Well, the reaction that weâve been getting from people is that we work with a lot of crazy time signatures, but we always try to make it sound like the time signatures arenât weird. I write by melody and not time signatures, and the band will just adapt to match those melodies. For the average listener, you donât necessarily realize the time is off, but you recognize something is different.

Tell me about "Guilt Trip." Do you find other people guilt tripping you often?
That song is about one particular girl, actually. Weâve all beenâ¦ well most of us have been in that shitty relationship with the girl or guy that lies with you and plays with you or manipulates you. Thatâs actually one of my favorite songs to play live because I get to get out all of this aggression and angst and I get to scream about this horrible person for three and half minutes and then afterwards I feel better. Itâs cathartic in that way.

You know, I get the impression that you guys are modern rock and rollers. Youâre all handsome guys. Do you find yourself being chased by the girls and getting called at all hours? I get the impression that you live a very rock and roll lifestyle.
You know, itâs like anything else. It comes and goes in waves. Right now, the other three guys are in committed relationships, so theyâre out of the game.

In modern punk rock, bands donât really cover sex in their songs so much. Do you talk about sex or do you specifically not talk about sex?
We represent it in our music for sure. Both "guilt trip" and "reservoir" cover that in their own ways. I feel like thatâs a topic that has largely been co-opted by Hip Hop. I donât know. Maybe thatâs a subconscious thing by punk rock bands where they fear that theyâll be associated with Hip Hop, which I think is a stupid thing to do.

Are you anti-Hip Hop?!
No! Not at all! I wouldnât say that Iâm a huge fan, but I definitely spend more time listening to the Hip Hop station than the modern rock station.

Hmmm! I think that this is further supplementing my thesis that you guys are a real rock band because you gravitate towards the drugs and girls style Hip Hop!
Thatâs just me, okay! That doesnât represent the other guys.

Well, thatâs fine. Letâs get more reflective. Why donât you tell me what "Yukon" is about?
My sister and I have this yearly tradition where we go on really weird camping trips and go to strange parts of Canada. One year we had this idea to take our car as far north as we could and jump in the canoe and go up the river. It was a crazy experience because we were there for three weeks and we didnât see another person the whole time. It was during the summer solstice, so it was basically daylight permanently. You start loose track of your days and sleep when you are tired and canoe with all of your time.

While we were doing this, I started to do a bunch of drugs just to see whatâs up. I started kind of loosing my mind and had this really crazy experience of having messed up sleep patterns and trying new things and being so isolated from everyone except my sister. This song that Iâm pretty proud of popped out on my trip.

Can drugs enhance the creative process?
Yes! Definitely it has the potential.

What do you like? Do you like mushrooms? Do you like weed?
I smoke a lot of weed. Thatâs my fallback or whatever. I enjoy the occasional mushroom trip.

Were you meditating? What were you doing during those 24 hours of sunlight? Were you saluting the river god?
I was doing a lot of mediation. Nature, isolation, and drugs kind of induces a meditative state when you are inactive. And, even when you are active, when you are canoeing for eight or nine hours a day, you just get into a rhythm and itâs silence and all there is is the repeatedly splash on the water, and the scenery that far north doesnât change. It was like a deep mediation and I went pretty deep into my brain and I think it paid off, lyrically.

How far out of your skull were you, while you were in the woods? Were you a rambling mad man or more like a relaxed guru?
I think more like a rambling lunatic. Thank God my sister was there. Itâs hard to explain how weird it is to only speak to one person for three weeks and how weird it is not to hear or see any civilization. The first time that we saw a plane fly over halfway into our journey it was like a crazy mind-blowing thing. Iâd say I was more like a rambling lunatic. But, in my own mind, I was making a lot of self-discoveries and Iâm thankful for that.