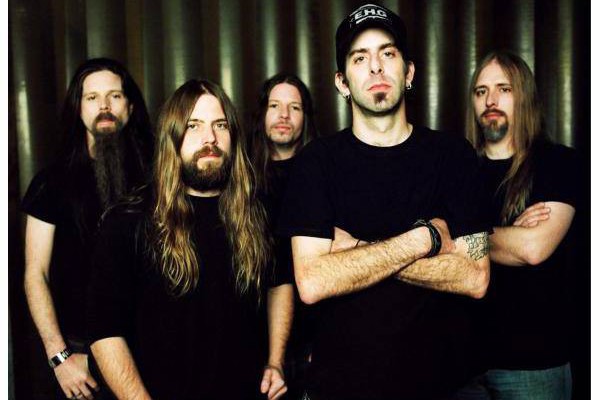 Few bands have been through the gauntlet like Lamb of God. In 2012, they landed in the Czech Republic for a concert. But, just as they were stepping off the plane, their lead singer, Randy Blythe, was arrested for murder stemming from the death of a young man who died shortly after attending a concert of theirs two years previously.

What followed was a nearly year long ordeal with Blythe being kept in prison, flying back and forth to the US and the Czech Republic, and the band themselves trying to help their fellow musician while knowing quite well that there was a good chance that their band would be destroyed in the chaos.

Thankfully, the court acquitted Blythe. To document their difficult year, the band has just released As the Palaces Burn, a documentary about the preceding tour, the trial and its aftermath. Punknews Features Editor John Gentile spoke to co-founding member and bassist John Campbell about the whole thing.

What was going through our mind when you were first approached on the plane by the Czech SWAT team?
The night before we played in Norway at a festival. We woke up the next morning and got on the first of three flights that day. It was a really long, ridiculous day. We were getting off in the Czech Republic and there was a guy standing in the skyway checking passports, sending most people one way, but everyone in our group was sent the other way.

I took a right turn and there was a woman there who said, "Give me your passport." I said, "Who are you?" She pulled out her badge and said, "Iâm a homicide detective and you witnessed something two years ago that we need to talk to you about."

I handed her my passport and my heart started pounding and I looked around and there were all these guys with ski masks and assault weapons. I had no idea what was going on. My heart was pounding. I took a breath, calmed myself down, and tried to be ready for what was going to happen next.

To me, the whole thing seems like a shakedown.
Well, I think ultimately, you have to consider that a child died. There was a death, these people are using their legal system to find out what exactly happened. Somehow, it seemed logical to someone at the powers that be that Randy would make a good person to charge with this crime. I donât think it was a set up. I think the only set up was when they waited for us to get off the plane.

So then, why did they wait two years to arrest Randy? Countries will often notify other countries when there is a person of interest that they want to arrest.
Supposedly, the authorities in the Czech Republic contacted the State Department and there was no response or the response was that they were not interested. I guess the notice didnât meet the requirements for contacting someone, but if it did, it would have played out quite a bit differently. I donât think there was a conspiracy of any sort. I think a child died and the family wanted to know what happened.

Now, there are sort of two schools regarding moshing and stage diving. Thereâs the Ian MacKaye/Fugazi school, that says moshing is dangerous and can hurt people. Then thereâs the school that says moshing has value, despite the supposed danger, because it is a form of self expression. Where do you stand now?
I grew up listening to Fugazi and Minor Threat and Teen Idles, and I understood at the time where he was coming from. In heavy metal, and even in punk rock, back then, that wasnât the case with everyone following that Ian MacKaye rule of thumb. People want to jump up and slam dance.

Since then, itâs obvious that tragic accidents can occur. But as someone that has been involved in the scene as someone jumping around in the crowd, I view that they are there willingly.

So, you feel that moshing and that sort of thing is a valid form of expression?
Absolutely. Absolutely! Just as much as dancing a waltz. Itâs a different discipline, but itâs an expression. I would say that moshing is more visceral and immediate. People that do it are younger and tend to bounce back from bruises and bumps.

During the arrest and trial, how close was Lamb of God to ending?
From my perspective, if I had any say, not at all. I had to be willing and accepting of the fact that not only could Randy be going a way for a long time, he might come back and say, "I donât want to do this anymore." There was a quite a bit of emotional stuff to go through.

Now, youâre a founding member of the band. I understand that Randy went through a tragic thing, but, was there ever a part of you that was jealous that the spotlight wasnât on you? You founded the band and you donât even speak until about 15 minutes into the film.
Ha ha ha! Absolutely not. I play bass. Generally speaking, bass players are not the most egotistical dudes in a band. Being that we never intended this as a vehicle of fame, itâs just more of an odd coincidence. To be honest, Iâm not such a fan of "fame." When you go grocery shopping -- having to stop at every aisle to say "hi" to someoneâ¦

When this whole thing was going on, did you think that Randy would get convicted? Did you think that he would be exonerated?
Mentally, I try to stay positive in all things. With this situation, we were told one thing, and then something else would happen. By the time it came down to if Randy would get any jail time, I couldnât waste time wondering, I had to go through all the psychological shock, and once it all passed, I had no idea what was going to happen.

If it was me, Iâm not so sure that I would have went back to face trial, honestly. Were you ever mad at the Czech Republic for essentially trying to destroy your band?
You are missing a very, very important point in all of this. That is that there was a family that had their own family torn apart and torn in half with the loss of their child. Itâs almost kind of sad that people would say that they wouldnât go back to face what was there. Randy has a great quote where he says, "Sometimes doing the right thing is not the most comfortable thing." But if you are focused on doing the right thing, and moving forward, it would never have been a question about whether to go back.

See, I would have been worried about a fair trial more than anything. I wouldnât want the Czech Republic to make an "example" out of me.
Wellâ¦. Is there any such thing as a fair trial anywhere?

Ha! Very true. In the documentary, the band talks about how they donât alwaysâ¦ or even usuallyâ¦ get along. Is it like a brotherly thing?
We all have different relationships among each other. Itâs very brotherly. We have known each other for 25 years and have done quite a bit of maturing and growing together. We love what we do together and we will fight going on.

Are you closer now then you were three years ago?
Sure! Three years ago Randy was also still drinking, so absolutely.

Can you describe your first concert back, after the trial?
I was just incredibly stoked that we were at the very least able to play a couple shows, so if it was the end, we would be able to go out with the end and not say, "Oh shit, was Norway our last show." There was still quite a bit of question then as to the future. But thankfully, it has worked out on our end.

So, Lamb of God is moving forward at full steam now?
We just finished the tour cycle for Resolution, which was a long, difficult two years for us. Right now, we are on a bit of a break and will get back together to work on music and by the end of the year get ready to record.

In the film, there is a fair amount of religious imagery. You guys visit the Wailing Wall and before the verdict, Randy crosses himself. Where do you stand personally on religion?
Hmmmâ¦ where I personally stand on religion… I have read a really interesting book called God is Not Great: How Religion Poisons Everything by Christopher Hitchens and I have to say, I agree with a lot of that book. But, I am also reading a book called There is No God and He is Always with You by Brad Warner, a guy who was from the hardcore punk scene.

Apparently, you have a funny story relating to the early hardcore punk scene.
I grew up in the DC hardcore scene and didnât listen to heavy metal at all. During this last tour cycle, we did Soundwave. And I was wearing a Kingfish shirt, a band that played a reunion show recently. Backstage, this guy kept saying, "Kingfish, I love those dudes!" I thought he was a crew guy or something. Long story short, I didnât realize that it was Brian Baker!