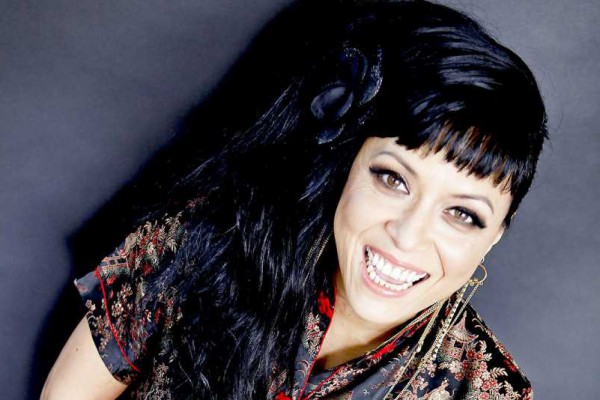 by John Gentile Interviews 9 years ago

What you might not know is that Annabella Lwin and Bow Wow Wow were sort of the most punk rock band ever. They were managed by the Sex Pistols' Malcolm McLaren. They took members from Adam and the Ants. Their first single was banned from the radio because it promoted illegal home audiotaping.

Of course, they came with controversy. Lead singer Annabella triggered a Scotland Yard child pornography investigation when she appeared nude on the band's first album cover. In the notoriously heterogeneous early English punk scene, Annabella was a 14-year-old female of Southeast Asian descent. She sang about rape, urban warfare and killing one's parents. So, yeah, she was pretty punk.

Because I saw Annabella live in New Jersey a little while ago where she completely killed it, I had to talk to her about Bow Wow Wow, her conflict with her mom, and about how there is a battle going on between her and Bow Wow Wow's old bassist.

Is it true that you joined Bow Wow Wow after Malcolm Mclaren got you fired from your dry cleaning job with the purpose of getting you to join the group?
Yes!

Were you mad?
Was I mad? I didnât know that he had done it. I just found out because I went into work and my boss at the time told me what had happened and I was quite surprised. My boss was quite upset with me and I was - How can I put it? Itâs nice to be asked. It was kind of done without my say-so. Itâs nice to actually be asked, because that way you have a choice and you can say yes. I had no money and was working at a dry cleaning place on a Saturday to earn pocket money.

What did you think of Malcolm Mclaren? Heâs a pretty divisive character.
When I first met Malcolm I though he looked liked a strange sort of fish. He was a tall guy with a pinstripe suit and he had a shock of orange hair and I found him fascinating because he was very posh. He spoke in the Queenâs English. [Mimicking very proper English] He spoke like that, very, very, very slowly. I found him fascinating.

Itâs crazy that you were only 14 at the time. Did you have to convince your mother to let you join a band at that age?
No. I had to leave home and go and stay with my auntie, shortly after Malcolm stormed in to see my mother. He had a meeting with her, prior to my first few rehearsals - but after that whole situation with the album cover - which is actually in the modern art museum in London. What did I do to convince my mother? I didnât convince her in any way, shape or form, and my mother and I fell out. And it was stupid, but I just loved singing.

Speaking of that famous album cover, you were 14 and naked around a whole bunch of people. Did you feel comfortable during the photo shoot?
I felt extremely uncomfortable, obviously.

Then why did you go through with it?
I felt uncomfortable on the day because it was extremely cold and I had to sit amongst grown men in the nude for some time. I didnât feel uncomfortable with Malcolm, just the guys in the band, because they were not friends of mine, ever. If you get the picture, you can see what Iâm talking about. The actual shoot day, with Andy Earl, he didnât make me feel uncomfortable. But I went through with it because we already discussed it. A decision had to be made before the day of the shoot. The decision was made between the band and Malcolm Mclaren - the band being three grown, adult musicians in their 20s.

"C30, C60, C90, Go!" was banned from the radio for promoting home taping. Were you surprised that you could make such an impact in the band?
Before Adam was kicked out of his own band, Malcolm was hired by Adam Ant to give him some ideas, and he paid Malcolm McLaren some money to come up with some ideas and he came up with some music by African tribes -- the Burundi.

This song was my audition. When all this controversy occurred at the time, it wasnât something I really understood, because I was a teenager. I was doing that - home taping.

I never knew about the controversy, really. I heard about it. I didnât understand it as well as I do know. In those days, the BPI [British Phonographic Industry] seemed to be clamping down on a bunch of stuff. Today they have things about" hos" and "bitches," and they donât clamp down on that, but in those days they did. After that, radio stations, pirate radio stations became existent.

Along those lines, do you feel that women are overly objectified in music?
Yes, of course. There are many, many examples of women being used for selling the records.

There werenât that many people of Southeast Asian descent in music then, nor are there now. Did people treat you differently because you were Burmese?
Yes, I was. When I was at school, I eas treated differently because I didnât look English. But, I look "Oriental." I guess, when I was young, I looked Chinese. I never knew the difference because Iâm a child of two worlds, so I never cared if youâre pink, brown, blue or polka dot. A human being is a human being to me. A cat is a cat and a dog a is dog and every one has a soul.

I was treated differently, I found it quite difficult to fit in. I was a square peg in a round hole.

Buddhism influences your worldview, I believe.
I donât care if people are pink, polka dot or whatever ethnicity or religion - itâs not about that. Thatâs really something we have to get to grips about on the planet. There are so many important things going on in this planet and with the animals. The last thing that we need to do is having fights. Thereâs no more time left for anger and resentment.

We have a dying planet. The ocean is dying and it is important to get to grips with that as human beings. Itâs important that the human species to wake up and smell the coffee. Weâve got not time for all this stupidity, greed and anger. Itâs not furthering the human race.

Now, lately, youâve been having an issue with the bassist of Bow Wow Wow either saying you retired from music or using your image or something like that?
For legal reasons, I canât really go in-depth about certain things. Last year, when he came out with his group of hired musicians, and went out on the road, I was quite shocked, actually. Again, repeating mistakes already made in 1983 I see. The difference is, when a person is 55 years of age, you think that the person would learn something in life and grow up a little bit.

Iâm talking about realizing the mistakes theyâve made and not making them again. Iâm going out as Annabella Lwin of the original Bow Wow Wow, and Iâm doing exactly what Iâve always done, I just happen to have a different bass player next to me.

Your new band is really good.
All the people that Iâve worked with in the past have all been great musicians, itâs just a shame that I'm unable to have a conversation with them because somebody didnât like it. What can I tell you? Itâs a shame when egos get out of control and people try to take credit for work that they didnât do. They have no respect for the original members that actually made that band a brand name.

Can you tell me about your new song, "White Smoke?"
No!

I think itâs important for listeners to make up their own minds. Its about feeling, not thinking really. When you hear a song on the radio, do you think, "whatâs that about" or do you actually feel the song?

Well, if itâs like Public Enemy I think what it is about. If itâs Peter Tosh doing something like "Burial," I feel it.
Ok, fair enough. Youâre kind of between heart and head. It means you are totally in harmony with your heart and head. I personally, as a songwriter, donât like to influence anybody. Everybody has a brain and a heart and their own life experience, so they make up their own mind.

What do you have planned for this year?
Iâd like to say a huge thank you to all the fans that have been so supportive. I would just like to clarify, any shows you see with the bass player from a band that I was an original member of, has nothing to do with me, and is done without my knowledge, permission or consent. I was not retired and I did not quit. Nobody has the right to stop anybody from doing what they are meant to do.