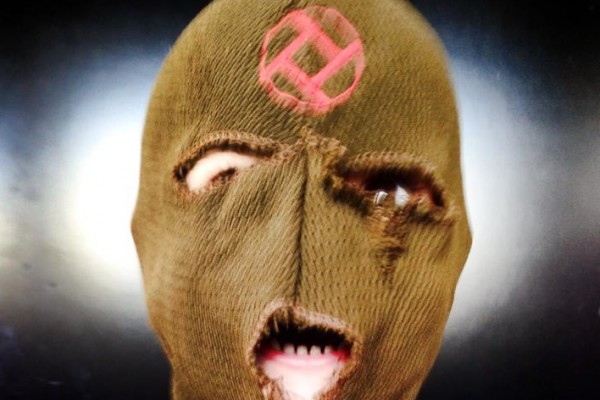 In 1993, the Federal Government blasted high volume, cacophonous, screeching noises at a compound in Waco, Texas in order to drive gun toting Branch Davidians out from their barricade. Dwid Hellion heard a clip of those wretched, painful, abject sounds on CNN and thought to himself, "I could do better than that."

Despite also fronting metal legends Integrity, Hellion immediately created the Psywarfare project, a mostly studio affair which found Hellion pushing sound to oppressive extremes for the purpose of selling the recordings to the government to use as psychological weapons against fortified targets. Although Hellion didn't end up making a sale, he continued with Psywarfare and every so few years, massive, bizarre sound recordings would appear in the underground trading circuit.

This Record Store Day, Hellion is releasing The Exotic Sounds of Psywarfare on A389 records, which finds him merging his own dark, ominous sounds with the organic music of the Pacific rim. Recently, features editor John Gentile spoke with Hellion about Psywarfare, the abstract attributes of homemade instruments and "how" to listen to noise music.

Is Psywarfare "noise music?"
Itâs like weaponized sound. I wouldnât even say that itâs music.

Hopefully, you can help us understand the intent and purpose behind noise recordings. Am I supposed to enjoy it like I would a more traditional song? Am I supposed to experience it, but also suffer through it, because it is weaponized?
Ha ha! Thatâs a good question. I supposed the intention is for you to suffer. But, for whatever reason, people enjoy it. I designed it originally because back in the 1990s I saw the Waco, Texas thing on CNN. Eventually, they couldnât get people out of the compound, so the government used what they called psychological warfare tactics, which means that they would use loud sounds, loud music, which might hurt a normal personâs ears, and use the big speakers and aim them at the compound, and hopefully drive the people out without having to shoot guns and such.

While I watched that, I thought to myself, "Wow! They are not doing too good of a job. I could do a better job myself." So I decided to put some things together that I thought would be more appropriate. Then, I looked up the phone number the Bureau of Alcohol, Tobacco and Firearmsâ¦ [laughs]â¦ So I called them up and explained to them that I thought that I had more efficient music that they could use in those circumstances and they said, "Ok, hold on." I waited a few minutes, and it sort of sounded like they were trying to trace the call or something like that, so I decided to hang up.

Thatâs how it was born. Trying toâ¦ help outâ¦

It also seems like itâs more of a tool than just something to be passively enjoyed.
Yeah. For, me, also, itâs expressive. But, Iâm not sure that itâs something that people are going to be dancing to. Some of it is rhythmic and hypnotic, and that has its purpose. Some of it is just loud, chaotic and madness.

Another side to why I made those recordings, is that I thought punk and metal was getting soft and not too adventurous. I thought that this could satisfy me as I was satisfied as a younger man by punk and metal music. Some songs were structured almost like a rock or punk or metal songs, with choruses and verses, but also with a lot of chaotic sounds.

But, there are also a variety of sounds, so I canât give one synopsis of the whole project.

When I listen to Psywarfare, I sort of imagine a movie in my brain, because there are so many sounds and it doesnât necessarily repeat like a rock song would. Do you have an intended way that someone should listen to Psywarfare?
I think however people choose to use it, is how it should be used. Peopleâs imaginations interacting with the sounds is the most rewarding aspect for me. I never put any thought into that people would actually listen to it. I just started doing the recordings and decided to release my own records. Some opportunities came around and I released some CDs and other formats. Lately, people have been discovering that material and asking if they could release the unreleased material. Itâs not doing me any good collecting dust here.

I recently picked up a copy of the re-release of Burning Flesh Children to Mist, which samples speeches from the Jonestown massacre. A recurring theme through your work is the concept of group mind control or massive group influence.
Thatâs the premise of rock and roll itself, isnât it? The whole concept of someoneâs idea going out to a larger audience and having a reaction to that. Thatâs the similarity to it, and perhaps the inspiration on a subconscious level.

I also think the extreme nature of a guy like Jim Jones or Charles Manson or Shoko Asahara or extreme people, also had some interesting things to say. If I agree with what they had to say doesnât matter. Theyâve said unique things, and that always intrigued me quite a lot.

Psywarfare seems to be particularly harsh sounding at times. Is this a reaction to modern punk music?
When I was a child, music that was popular was Chuck Mangione and disco and that sort of thing. So punk and metal were more dangerous types of music. Over the years, due to marketing and MTV and even bands, the music seems to have become watered down. When I was young, old people would say, "that just sounds like noise!" Thatâs kind of lost these days and people kind of want to make everything so poppy and even the crazier bands are really toning down to sound more like radio groups and such. I thought that the noise stuff itself was the textbook definition of what your grandmother thought of your punk records.

Even Green Day, which I donât think is dangerous at all., I think itâs as dangerous as Chuck Mangione, some people consider it to be outlandish. I always thought that noise music was the real definition of what people like my grandmother were saying when they heard punk music.

Is there a theme running through The Exotic Sounds of Psywarfare?
With that record, it was recorded in the mid 90s. I have a big passion for Hawaiian music, like Martin Denny. That was the inspiration and this Hawaiian tiki, rhythmic thing. I made this song in my basement. There were looping ,machines that I used -- one was digital and another one I made out of taking cassette tapes apart, and just making a tape with one loop, so it would just keep running over and over and recorded over and over again, depending on how you applied the technique. I was making these weird loops of sounds that were influenced by Hawaiian music. For me it may sound like that, but for others it may sounds like something else.

You know, Dwid, I find you especially fascinating, because whatever angle I expect you to take, you go in other directions. I would have never guessed that you like Hawaiian music. As I go over all your different bands, Integrity, Psywarfare, Kill Life and others, I often look for clues or games that you have hidden in the music. When recording music, do you factor in the audience?
Itâs purely what Iâm interested in. I donât really care too much about what people think. If I did, Iâd probably be crying all day, because it doesnât fit in with what most people like. Itâs like you said, when you are listening to Psywarfare, it creates like a movie or story in your head. With Hawaiian music, it sort of has the same effect for me. Sometimes thereâs a bird in the music, or sometimes there are homemade instruments, which is a big passion of mine.

Martin Denny is famous because a big tree fell down behind the bar he always played at and the owner said, "donât worry about that, I know itâs an eyesore. Weâll get in cleaned out." Martin Denny said, "No! Iâm getting ready to hollow it out. Iâm going to make it the biggest drum on Hawaii." So, he turned this disaster into an iconic music instrument for the bar, which I think is a pretty creative and imaginative to do. You can hear the tree on a lot of the recordings and even the birds. The birds on some of those songs arenât samples, they are the birds that were just there.

I know that you used to create your own cigar box banjos and cigar box guitars. Do you still do that?
Yeah. I make guitars and banjos. I made a banjo out of a tambourine and broomstick for my friend Tony, who is the singer in Turbonegro. I made one for Fenriz from Darkthrone --- I made it from a license plate with the Norwegian flag. The most I make is a three-string guitar, because I figure if you make more than three strings, you might as well go buy a cheap guitar, which kind of defeats the purpose anyways.

Whatâs the purpose of using these unusual materials to create instruments? Is it just for fun, or do you think those materials have a unique resonance?
I think both. By using a metal license place, you are getting the idea of a resonance guitar or a steel guitar. You can get the resonance from a piece of sheet metal. Each piece will sound different than the one before, because it is made from unique material and is handmade. Itâs not made by Gibson, itâs made by cheap materials in my backyard.

I think thereâs a certain alchemy -- because Iâm putting together each element with a certain intention, I think a little bit of that gets captured in there and makes the instrument have a little bit more character.

Whatâs coming up for Integrity in the future?
We had a 7-inch come out with the Melnicks that came out recently on A389 which is called Beyond the realm of the VVitch. We have an older song that we recorded four years ago that we never finished. Itâs a strange song that we finished in the fall. Thatâs coming out on Record Store Day with a band called VVegas.

Are you still a record collector?
I do collect records, but I donât collect just anything. The Record Store Day thing doesnât really happen in the village that I live in. I know some stores can get certain records and some canât.

What was the last really cool find that you got, record wise?
I got the first 7-inch by a band called Vetala. They are Portuguese satanic metal stuff. Itâs the Vetala Kruel Kommando split. Thatâs not too easy to get. My friend Dom sent me the Don Ho TV Show album, which believe I or not, is not too easy to get. Thatâs another Hawaiian thing. I got Johnny Woodsâ So Many Cold Mornings.

I love hearing your range of tastes, because itâs so unexpected and fascinating. You actual also run Holy Terror Records, correct?
Yes. Robert Orr, who is in Integrity, his other band, called Unreal City, has a 7-inch coming out on Holy Terror in the next couple of months.

Last question, you once had Lemmy of Motorhead introduces one of your tracks. What did that mean to you?
That came about through a Motorhead tribute compilation. We did "Orgasmatron." That was a great honor. Lemmy is the Oscar Wilde of our generation.