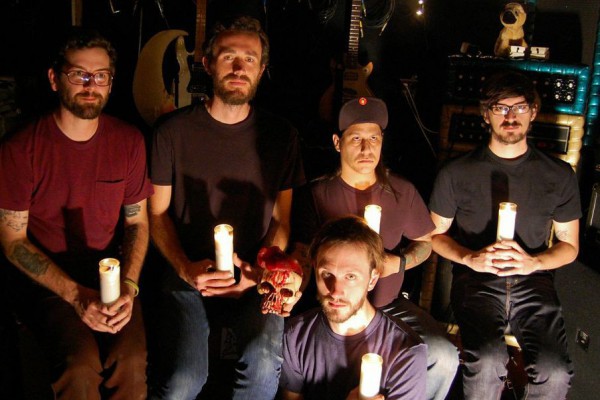 Andrew Jackson Jihadâs new album, Christmas Island has death around every corner. On it, there are gods demanding euthanasia. Ghosts break dance on their own graves. Jesus cries out to stop the crucifixion.

But despite the near-constant parade of finites, the backing music ranges from soothing ballads to snappy, acoustic ditties. One minute a '50s AM radio organ lifts a doo-wop refrain. At the next, a stomping hoe-down beat drives the doggies forward along with a gleeful cheer. The grim reaper is given a nice quinceanera dress and a tiara, if you will. It doesnât make him any less scary.

But, this contrast of the grotesque and the good times springs from a loss in frontman Sean Bonnetteâs own life. Just before recording commenced on the album, his grandfather, who raised him for five years, passed away. Despite Bonnetteâs "aw shucks" demeanor, Punknewsâ John Gentile sat down with him to speak about that horrid, swirling, twisting, wretched, inescapable abyss that is The End. Also, they talked about Linda Ronstadt.

Click read more to dance with the Devil in the pale moon light… or to reflect on the Stone Poneys.

Death is seeped into this album. Nearly every track mentions the final void. You reflect on the grim reaper from different vantage points throughout the album. In some ways, Iâm reminded of Nick Blinko of Rudimentary Peni, who often makes the argument that death is a sweet release. What do you see death as?
I donât see death as that. Iâve come to see death as an inevitable thing. Who knows what happens when we die, but we will all know one of these days. For the most part, at the present time, Iâm ok with that.

I know that your grandfather passed away about two weeks before the recording of the album. Is this one of the reasons you seem so fixated on death?
Yeah, that and a couple of other people that died around that same, or were getting ready to die -- aging and all that -- natural stuff. I see a lot of the record as about pre-grieving. Grieving before the death because you know itâs going to happen.

I find that interesting because despite the sometimes dark subject matter, the actual music is whimsical and upbeat.
Yeah, I like the sound of the record a lot. I like that they sound jolly.

How tactical are your songs? Do you sit down and plot them out, or do you guys just jam and all of a sudden, youâve written a song about a suicide cult?
I hardly ever chose a topic. On two occasions I have. One of them was the theme song to a radio show. Generally, I donât have much control over a song, except to shape them. I might try to write a song about a particular subject, but Iâll actually start getting stuff done when I throw the idea away and just let it color the song.

When I was a kid, the Heavenâs Gate cult was a really crazy event in my life. I lived in San Diego around the time that it happened and became aware a cult like that existed.

You know Sean, you earned huge bonus points in my book when you referenced Q Lazzarusâ "Goodbye Horses" on the new album. Do you have a personal affinity for Q Lazzarus or the mystery surrounding her? No one knows who she is and there are only one or two songs under her name.
Oh my God! I wasnât even aware of any of that! It was mostly how awesome the song is and the songâs amazing placement in Silence of the Lambs. By the way, I have to thank you for getting that reference. Youâre the first person in the pressâ¦ or anyoneâ¦ to get that reference. Thank you, man! You win! You totally win!

Speaking of references, you seem to mention Bad Lieutenant: Port of Call in "Coffin Dance." You mention the break dancing ghost from the movie.
Yes! Except I call it Bad Lieutenant 2.

Why was that scene particularly powerful for you?
The most base reason is that I watched that movie a bunch of times and it was always on my mind, or on my mind frequently during the writing of the record. I think maybe the reason why that is, Werner Herzog was trying to tell met hat there is no wrong way to write a song.

If you watch that movie, it starts off like a TNT original. The cinematography is all really hokey. The grain of film is very CSI: Miami. Then it morphs into the meditation about the nature of reality. All the while it is framed in this cop story that is so over the top.

So, you find a camaraderie with Herzog when creating art in that, form, or structure, doesnât always deserve the gravitas that people give to it.
Yes. Oh yes. You hit the nail on the head. Up until last month, that was the only Herzog movie that Iâve ever seen. I wasnât even aware of his amazing filmography. He plays with structure and format and does whatever the fuck that he wants to do. I donât know if it is s much camaraderie, as much as it is a teacher-student relationship, or even just being inspired by him.

Letâs talk about your Grandfather. Did you get along with him?
He was my momâs father. He raised me. He was the number one male role model that I had. I lived with him from age 13 to 18 with my grandmother. He was a very good man.

What did you learn from him? The ethics of hard work? Appreciation of art?
Work ethic, for sure. I think heâd be proud of how hard I try to work. Common sense. He used to always joke about how he would go to community college and teach a common sense class. Thatâs how I remember him. "Iâll teach you all that you need to know. If itâs hot, donât touch it. Iâll teach you how to chew gum and walk."

What was his profession?
He was a mechanic.

You know, I feel that mechanics are underappreciated. I think mechanics are some of the smartest people there are. Have you ever tried to do heavy-duty car repair? Itâs really difficult.
Oh yeah. It can be impossible.

Was it particularly difficult for you when your grandfather passed away? Did you see it coming from a while away so you could prepare yourself for it?
I saw it coming from a while away. I knew it was going to happen. It happened -- it wasnât suddenly. It was a beautiful death. He got to see all his grandkids the day before he died. He died very peacefully. It was the best you can hope for.

And you and he parted on good terms?
Oh yeah. We never had any kind of beef.

You once said, perhaps metaphorically speaking, that the ghost of your grandfather was there in the studio during album recording. How superstitious are you? Do you believe in ghosts?
I would say that Iâm open. Iâm not particularly superstitious. Sure, ghosts are probably real, why not? I was speaking metaphorical when I say that. In that metaphor, the lessons that he imprinted onto me, I look at something and imagine what my grandfather would have said about it.

Sean, Iâm looking at these lyrics. "Like a baby-killing Cadillac." "Like a God begging to be murdered." Sean, these are very, very dark lyrics. Everyone says that youâre a nice guy. Everyone says that youâre an easy-going guy. Are you a dark person, deep down? Is there a blackness inside of Sean?
Umâ¦ I think I probably have the same amount of blackness and darkness as everyone else. But, I have an outlet and I can reconcile myself with that. I write songs about the stuff that I think about.

Have I just been out hip-hopped by you?!
Yes, you have.

Sean, who are your top three MCs?
Ol' Dirty Bastard. It could be Danny Brown -- heâs new but heâs so good. The third one is always the hardest. Biggie.

So, tell me, what does Linda Ronstadt represent to you?
She represents to me Arizona and the true unabashed joy of singing.