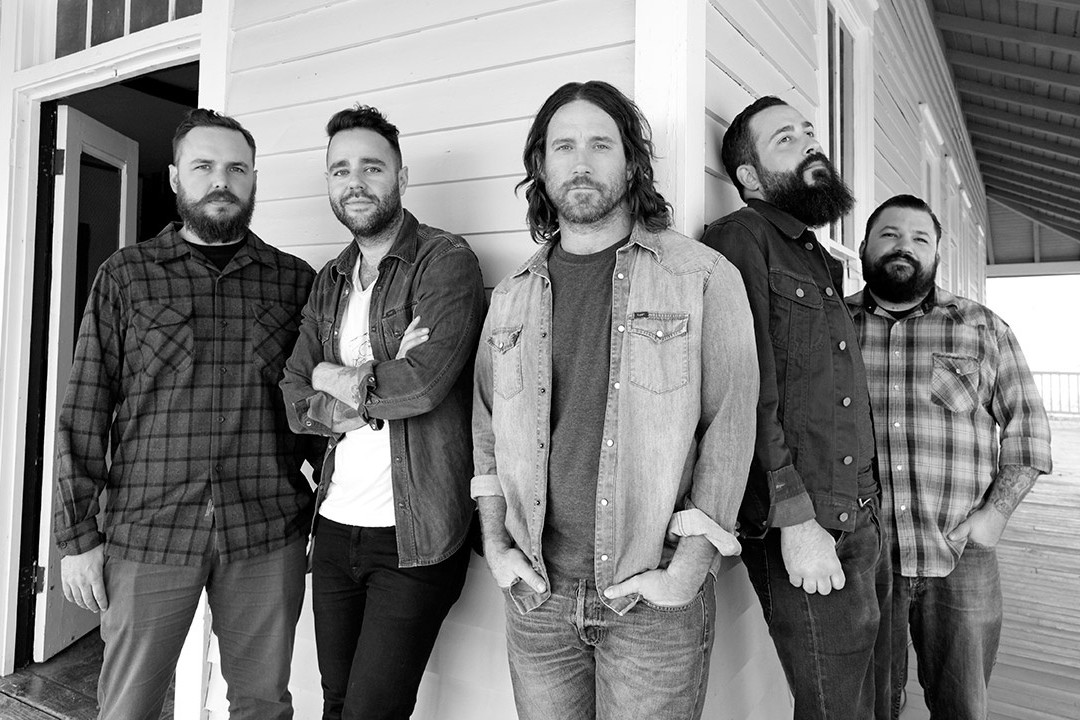 Chuck Ragan is a guy with a beard who wears flannel and drinks whisky. He recently released his solo record Till Midnight. Dave Hause and Jenny O are on it.

Everyone keeps telling him that heâs manly, and frankly, a lot people dress exactly like him. People might actually want to be him. He knows how to fish and has probably whittled something before. Also, as a member of Hot Water Music, he basically invented what you all call "Orgcore."

You can click read more to see John Gentile's interview with Ragan about the new album, skating to Creedence and his momâs ventriloquist skills.

Chuck, everyone always says, "Oh, Chuck Ragan! He is manly!" Do you feel particularly manly?
I think itâs ridiculous! I donât know why people gravitated towards all that stuff!

You wear the flannel on stage. You have a beard. You like whisky. By now, hundreds of thousands of punk rockers do the same. The fact is, Chuck, many people in the punk rock scene want to be you. Why do people want to be you, so badly?
No, I doubt that, man! I doubt that! I dress comfortable, as much as I can, I guess. There are some people who answer that question seriously. I donât think people want to be me. I donât think people even really know me. They know me through my songs.

But, in terms of people who just know our music, itâs for folks who speak on a personal level, for folks who are inspired by what I do. Itâs incredible. Itâs overwhelming. Itâs flattering and itâs a beautiful thing. I grew up admiring songwriters and bands, and at times, when Iâve met them, that can go one of two ways. They can either fulfill your expectations, or it can be a complete drag.

There have been plenty of times when Iâve meet people that have fulfilled those expectations and then someâ¦ and vice-versa. Sometimes theyâre not all that. Iâve been influenced by people that Iâve found hope and inspiration through their lyrics and records -- bands that spoke to me. For me to have an opportunity to continue that cycle, and just be a piece of the puzzle, is incredible.

What bands have lived up to personal expectations set by their records?
Thereâs many, many people. One of them is Brian Baker. Another is Corey Brannon. Jenny Owen Youngs. She really blew my mind. I was such a fan of her tunes to begin with, and when we brought her out on Revival Tour and got to know her, and just how she interacts with people, and how she just looks at life, it just really, really was inspiring. Stuff like that is inspiring. Itâs special to find that.

Now Jenny O, but not Jenny Owens Young, is on the new record, Till Midnight.
Right. Itâs funny, we had them both out on one of the Revival Tours. It just ended up that way and the ironic thing was that they lived on opposite sides of the country and we found out later that they went to school together.

Dave Hause is on the record, too. Whatâs it like when you two work together?
We fight crime in the hallways of Canada.

Now youâre feeding into your own mythos!
Yeah, I wouldnât do anything different with him than any other friend would do. Heâs a good buddy. I love him to death. Heâs just one of those dudes -- weâve spent a lot of time on the road, in many shapes and forms. We always have a blast. We both just kind of drive each other.

Heâs one of those buds where weâre both itching to see what the other is doing next and looking forward to crossing paths. I can say that about a lot of songwriters and folks we roll with. Heâs solid. That was a really cool thing, him ending up on the record. Along with the rest of those folks, none of it was planned, having any of those guest vocals. That was more of a thing that we were in a position at the session when it was time to start doing things like that backup vocals, overdubs -- and we just had friends that were coming through town.

Dave Hause was playing at Origami Records at Silver Lake and we were all planning on going to the show. He was planning on swinging by the studio to say hello and it all happened like that. Same with the rest of âem. Chad Price and Jon Snodgrass were on tour and just swung by.

What I find interesting about you is that on one side, youâre a punk rocker, which can be about tearing down the past, and on the other side, youâre a folk guy, which can be about carrying on the great tradition of American music. Do you see those two sides of yourself in conflict?
Thatâs a brilliant question! When those two sides, as you put it, opposing forces of music, came in one place and became seamless in a way -- it was when I as kid. I grew up in an old conservative, southern Baptist household. A lot of the music in my house was either Cajun-driven, spiritual, gospel, bluegrass, there was a little bit of country, but mostly not anything secular -- some of the Cajun music was, because my grandparents. My mawmaw and pawpaw, he was an accordion player and she sang. Those were some of my earliest music memories.

I always think about this moment where I had a buddy who we used to go over to his house all the time. He lived down the road and he had skate ramps -- his folks owned a skate shop and were super supportive. His dad used to help us build skate ramps. We had skate sessions there and they would let us play whatever music we wanted to play.

The dad would then step up and say, "Iâm going to play my music now." And it was always like Muddy Waters or Townes Van Zant or CCR, and I was hearing a lot of that stuff for the first time. What was cool was we never stopped skating. We just had fun doing what we were doing. All that music became familiar to us and it kind of became this seamless connection, musically. It just became this seamless soundtrack. Through the years, as I grew up and started playing everything from punk rock and rock and roll and folk music, and even in the early days before Hot Water Music, doing acoustic music, and all through Hot Water Music, we were always writing and playing acoustic songs, and just telling stories. I found a lot of parallels between the two.

A lot of people donât know that your mother is a skilled, professional ventriloquist.
Yes, thatâs right!

Were you proud of her as a teenager or embarrassed?
Yeah, Iâm completely proud of my mom. One of the coolest things of what sheâs done with her life, is that sheâs completely done everything herself her entire life. Itâs all sheâs ever done since she was 14 -- as a passion, as a livelihood, as a release, as way to bring people together.

For years, I battled my parents over religion and school and whatever. We always butted heads as I was growing up at a young age. We had a lot of tough times to get through. We have a wonderful relationship nowadays. When I look back, everything sheâs done -- same with my father -- my fatherâs a professional golfer. He grew up touring. My mom grew up touring. Our whole family, one way or another, has these strange occupations and has taken life with that take-no-prisoners attitude and done their own thing.

When I look at my momâs career, for instance, it might not be the way I would live my life, but I respect her work ethic and, honestly, itâs where I get my work ethic from. Sheâs a go-getter. She works harder than anyone Iâve ever known. She makes a lot of sacrifices and believes in what she does. That stance on life is commendable and respectable. Not to mention, sheâs just so warm and giving for folks.

Do you have ventriloquist skills?
No. I donât!

Whatâs going to surprise people on the new album?
Man, itâs honestly the camaraderie. The combination of all the work and energy that was put on it. It takes a village to make a record. Iâm not just talking about the musicians or the players. There are so many people behind the scenes that never get enough credit. In a way, everybody does their work. Whatâs special about this record is that all the pieces line up. Everybodyâs energy and attitude was lined up and it comes through on the record.

Chuck, I am officially giving you a license to dismiss modesty for this question. What is like having created an entire genre -- Orgcore?
I canât take credit for that, man. None of us, can. Iâm just a piece of the puzzle. The same way we were growing up listening to Midnight Oil, and Fugazi and the Steve Miller Band -- music that affected us -- We just wrote the songs that we were going to write and it was a strange combination of everything that we grew up with -- hardcore to rock and roll to metal and jazz and blues and folk.

We were just doing what we do. Every single band across the world is doing the same exact thing in so many ways. I could go ask the same questions to bands that were around the same time as us. Weâre just a piece of the puzzle.

Tours: A Day To Remember / Bring Me the Horizon