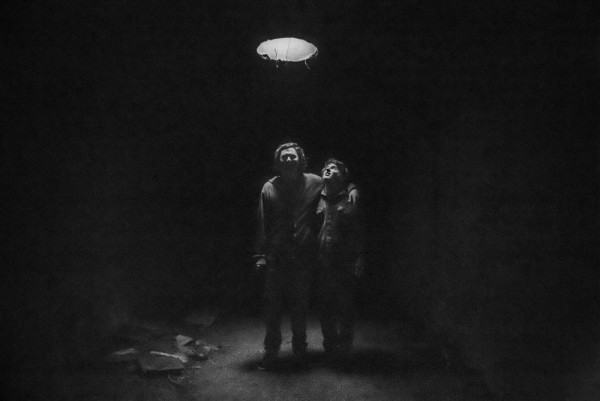 by Armando Olivas Interviews 7 years ago

The Front Bottoms are gearing up for an eventful summer as the band prepares to release a new EP (today!) as well as embark on a tour with Say Anything this month. The aforementioned EP is the first in a series of releases dedicated to each of the band members' respective grandmothers, this EP being dedicated to drummer Mathew's grandmother Rose.

Punknews veteran Armando Olivas had the opportunity to ring Brian up for a quick chat about the band's busy schedule for the next few months. The two had a vivacious conversation about how the EP series came to fruition, Brian's wrestling persona " The Schwing" and a random assortment of other topics.

I will start things off with a simple question. How are you today?

Speaking of jamming, you guys have a new ep coming out soon. Itâs called Rose. From what Iâve read in a series of EPs named after your grandmothers. What made you guys decide to take on that kind of project?

We had the idea kicking around for a couple of years actually. It came about because we would play shows and people would request songs like "Jim Bogart" or other old songs we really didnât think people would listen to. Songs we recorded usually in one take and put them out on the Internet that same night. We didnât mix them or master them or anything like that. So they were kind of like demo quality but they were fun I guess. People liked the songs and we always thought we should try to do something with these songs so we could re-work them, re-record them, polish them up and make them sound good. Thatâs what we did. We thought with the grandma series it would give us the opportunity, Mattâs grandmother passed away a few months ago and my grandmother passed away around the same time, and the timing seemed right so we thought, "Letâs do the first of the these grandma EPs." So we chose six songs. There were some suggestions, Mattâs grandma had a favorite so we threw that in, and we listened to what people were saying at shows. So we felt this was a nice group of six songs and that there was fluidness to them. We went into some studio in Asbury and re-recorded them all. So we were happy with how they came out. You can still listen to the originals and now you have these beefed up ones.

I saw on Facebook a while ago that you asked fans about what old songs they might want to hear re-recorded. I didnât follow up with the results but now I am curious as to what was high up on the list?

It was pretty crazy. There were a lot of suggestions all over the place. There wasnât anything that was totally polarizing, like people want this one song. There was a bunch of songs but overwhelmingly people wanted "12 Feet Deep," "Lipstick Covered Magnet" came up a few times and "Be Nice To Me" surprisingly came up. That was one that didnât come up as much but we were like "That song is pretty fun. Letâs see if we canât rework it," so that got lumped in. Itâs kind of all over the board. The thing thatâs cool about it is that there will be more of these grandma EPs. We will eventually go back and re-record all of that old stuff and maybe do some fun stuff with it

That leads into my next question, when can we expect more details on future releases in this project or is that not on the radar yet?

Thatâs not on the radar. We are going to start writing new material soon and itâs kind of an ongoing process. Our next album is going to be the next thing that we release and even that is kind of likeâ¦. We are going on tour with Say Anything for two months and then we go back to Europe in August. When we get home from that we do a few more things and have some other things planned. So we are going to be super busy; weâre going to just focus on writing new material whenever we have the opportunity to do it so we can get new songs out. There are all songs we really enjoy but there is nothing better than coming with new stuff and being able to play new songs live. The grandma series will be something where if we have a month off and havenât released anything in a year or two weâll be like, "Alright letâs record the next grandma series release." Itâs not really planned out. Itâs more fluid.

I like that. What was it like revisiting these old songs? How much did you tweak them? Iâm only familiar with some of the demos so I didnât get a chance to sit down and compare them all.

The songs changed a little bit naturally over time from playing them live, not playing them for a long time and then revisiting them, or forgetting how to play them. We are working with two awesome guys, Tom and Kieran. Tom plays bass and Kieran plays a lot of instruments. So it was an opportunity to let them take a crack at it and come up with some cool stuff. They didnât change drastically; youâll still be able to recognize the songs. We just spiced them up a bit; threw in an extra guitar line there, maybe more gang vocals. Which is always nice. You brought up Say Anything earlier and I was going to ask about them anyway. Two years ago you toured with them and were direct support for about half that run. This time around youâre on the whole run as direct support. How does it feel to have blown up as much as you have in that time?

It feels awesome. Itâs an incredible feeling to have those guys invite us back out. Knowing the first time we went out on that tour two years ago we were the first of four and played 20 minutes. Then got in a van loaded up and drove all night to the next show to play another 20 minutes; to go from that, which was an incredible experience, to them asking us if we want to be main support. Itâs a cool way of tracking what we have done as a band over the past two years and itâs very exciting to see. We would have been happy to play first of four again without a doubt. Itâs nice to know that someone wants us to play a little later in the night. All the bands playing are awesome. You Blew It is first of four this time and I see a lot of us in them. Iâm really excited to go on tour with them; weâve been on tour with them before. Weâve been on tour with the So So Glos in the past and theyâre super positive dudes. Then you got Say Anything, itâs going to be great. Iâm excited for the tour coming up.

It seems like every time you answer a question you kind of bring up what I want to ask next. How stoked are you to be touring with nothing but friends youâve been out on the road with before?

Itâs incredible. It seems to be happening more and more. Itâs cool to spend time and hang out with friends like the So So Glos, You Blew It and Say Anything. Watch them perfect their craft, itâs cool.

Yeah. Normally you go out on tour with people youâve never really met but quickly become good friends with. This time around there is an established relationship with everyone. I feel like the tour is probably going to be better because of that.

Last time we spoke you mentioned your wrestling persona "The Schwing." How is that going?

(Laughs) I regret it. Nah, Iâm just kidding. I had to stop pushing The Schwing for a little while. I remember the guys in You Blew It got a real kick out of it so maybe heâll make an appearance on this tour. Iâll have to see. The Schwing is doing well, he is working on a childrenâs book right now and we will see. Thatâs an open-ended personality right there.

Are you serious about the childrenâs book?

Oh yeah, thatâs definitely for real. Thatâs something that is in the works. Very slow process because you can only really harness The Schwing at certain times and itâs hard to get him to sit down and write a book. Very slowly itâs working itself out.

Well what can you tell us about the book? Is there any specific theme? Whatâs going on there?

Itâs basically The Schwingâs outlook on life and his catchphrases; how to really live with a Schwing attitude. Itâs very positive. Itâs kind of hard to describe. Itâs going to be something you have to experience. Itâs one of those things you gotta learn but canât be taught.

I got you. Also, are you somewhat current with wrestling at the moment?

You know I fall in and out of it. I was trying to get that channel they have thatâs only ten bucks a month and you get to watch everything. I havenât gotten it yet, I got to work on getting more cash together but Tom is up to date and usually fills me in.

Yeah, I was going to ask if youâve been keeping up with Daniel Bryan and everything going on with that.

No I havenât, whatâs the situation there.

It looks like he has just injured his neck and the championship is in a weird state of affairs. I more so wanted to touch upon the Yes Movement and how positive it is. To ask, if The Schwing had a chance to join the Yes Movement, would he?

Well in a sense donât you both share the same vessel even if you are two different entities.

Going back to what you said earlier with The Schwing possibly making an appearance on this tour is there any chance of you taking on Tanner in between songs?

It might happen. I messed Tanner up the last time that he stepped up to The Schwing. He might be a bit scared because heâs a bitch but we will see.

Well if it does happen I say it should happen in California. I volunteer myself as the ref to keep it cleanâ¦for the kids!

Thatâs good to know. We might actually have to work something out then.

Sounds good to me. I think weâve almost run through everything here. You mentioned working on some stuff when you get home from Europe. Can you talk about any of that yet? Or is still so early that itâs hush hush?

Itâs not that it is hush hush but that it is in the earliest stages and will probably fall through. I donât want to say something, have someone get excited, and then have it fall through but we are staying busy. Trying to make sure things happen, put on some good shows, and stay positive.

I think we hit everything. Anything you want to talk about before we wrap this up?

I think we nailed it all. Thank you, man.