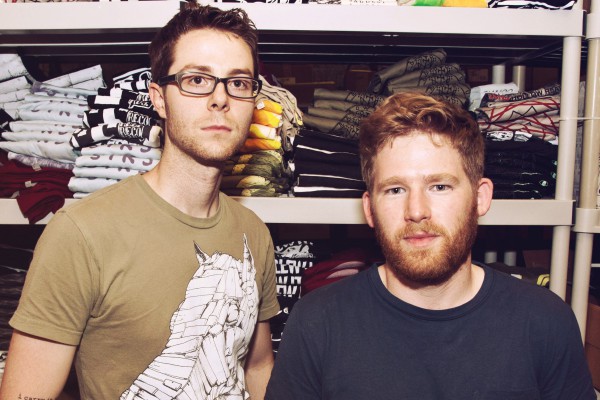 You probably own something from Topshelf Records. The prolific Boston-area label has been cranking out records lately, including recent releases from Frameworks, Wild Ones and Diamond Youth, and thereâs little sign of a slowdown. In July, Topshelf will release No Coast, Braidâs first full-length in 19 years.

Handling all of those releases keeps label founders Seth Decoteau and Kevin Duquette extremely busy, but Punknews editor Adam Eisenberg found a minute of Sethâs time to talk about the labelâs roots, how they juggle so many releases and where Topshelf Records goes from here.

A long time ago, Kevin and I were playing in a band together and wanted to figure out a way to get our band out there more. So we had this idea to start a label to make it seem more legit. Like the Kids Table, and how they had Fork In Hand, how Brett from Bad Religion had Epitaph and so on, and how it could grow into something, maybe. If we had a label, that we were on, weâd be that much more legit of band. Eventually, actually, we never really did too much with the band, but having put enough work in we were like, "well, letâs start releasing music for our friends." Thatâs where it all started.

Do you work on the label full-time?

Kevin does Topshelf full-time, and I work for Bridge 9 full-time.

Itâs insane. Iâm at work an hour to two hours before everyone else doing stuff and then Iâll work every single night to make sure stuff for Topshelf doesnât fall behind.

What are the biggest day-to-day challenges with running a label?

A difficult thing that a lot of people donât think about is making sure that from the point that a record gets made ??" finished recording -- to actually coming out, happens on time. Youâve got to get the record mastered and get it off to the pressing plant to make vinyl or CDs, and figuring out the the best time range to release it, getting the artwork madeâ¦ But last year we did 20-plus records so juggling that for us, with the amount of records weâre doing, is definitely difficult, added into any of the general day-to-day things.

Every label seems to have a different policy on accepting demos. Topshelf accepts them, right?

Yeah, totally. We prefer to get e-mails, not actual MP3s, but URLs. You never really know what youâre going to find in it. Itâs always interesting, sometimes weâll get a demo, then weâll find out a year or two later that band is doing really rad things, and we didnât really pay attention to it. Itâs always interesting to see those bands that end up going elsewhere but doing something.

How many demos have led to records on Topshelf?

I could be wrong but Iâm pretty sure none. We check âem out. Between Kevin and I, every demo will get listened to. We tend to work with bands that we have a relationship with or that our bands have a relationship with. That doesnât mean we never will. It doesnât mean that having gotten a demo from a band a year or two years ago, and then they release an EP or a record thatâs rad and they pick up some steam that we might not go back to that band and ask them about working together. That immediate "send a demo and get signed" is not really the biggest thing because most labels have their ear to the ground. If youâre doing something as a band thatâs making some waves and getting attention then chances are that a bunch of us already know about it.

Youâll be releasing Braidâs first full-length in a long, long time. Thatâs a pretty big deal. Howâd it come together?

Yeah, it is something that both of us are quite excited about. Iâm sure there are a few other people who run labels who can attest that when you start a label you donât really think anything about it, and then once youâve done ten releases you start to go, "Oh, hey, it would be awesome to release something from X band. Yeah, thatâll never work." For both Kevin and myself, Braid is one of those bands where itâs just like, holy shit, when we started this we never thought weâd be able to work with a band like them, and to work with a band that both of us have been such huge fans of for so, so long. I donât even care if this record is good bad, for us to do it is like, holy shit, but the record is fucking insane and weâre quite excited about it.

Obviously those dudes got back together and released Closer to Closed on Polyvinyl. From a lot of close friends we were in touch with them and their management and in their ear non-stop about everything. Weâve known Bob for quite some time, heâs played some SXSW showcases of ours. I think a lot of that, combined with what the label is doing right now and where weâre at, being a good home for them, really came together at the right time and made sense for all parties.

Obviously itâs a big deal to work with Braid. Are there other bands in that stratosphere that youâd like to work with?

Yeah, Iâm trying to think of something so I donât sound lame. I always think that my 16-year-old self would be really stoked to have done something with Midtown. Itâs crazy. A lot of bands that were seminal bands for us growing up, or even pre us growing up but that we got into really early, are reuniting now and working with the labels that originally released their stuff, like American Football. Mineralâs doing stuff, the Sunny Day Real Estate split, all of that is happening now and all of those are bands that would be insane to do something with, but all of them have relationships going back, which is a pretty cool thing.

[Note: Seth texted us after the interview to tell us heâd also like to work with Knapsack, Jimmy Eat World, Texas is the Reason and Mineral.] Where do you picture the label a few years from now?

Hopefully growing still. Weâve been doing this for eight years, but thereâs still stuff weâre learning every year, and even at times every release, and being able to work with more bands that are bigger and helping our bands to grow more. Itâs definitely important to not just be happy with where things are regardless, even with some of the success weâve had lately, weâre always trying to up the ante and do something bigger next time. With us thatâs always a goal, to never just settle for where things are at.

We mentioned Braid, but what other releases are in the pipeline for 2014?