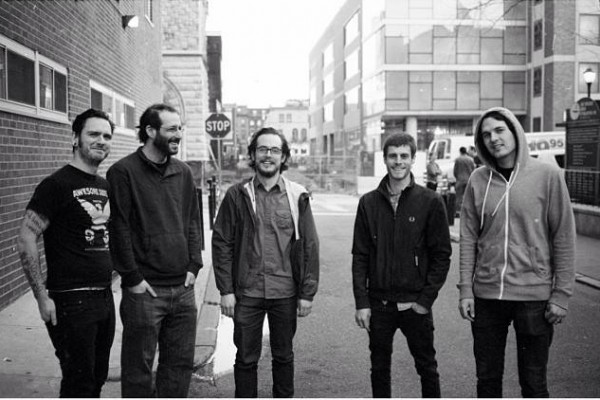 by Samantha Barrett Side One Dummy Interviews 8 years ago

Philadelphia, PA has a lot going for it recently in the punk world. Notably, Restorations is much loved in that punk sphere and is sharing with us what they love to do best in musical format. Restorations have embarked on cranking out new music this year by releasing LP3 on October 28, 2014 on Side One Dummy Records. Contributing Editor Samantha Barrett chatted with guitarist Jon Loudon about the new LP and future plans for the band.

Some would say you have set a high bar for yourselves with LP 2. Do you guys feel you have outdone yourselves with LP 3? Tell me about your new album…
I'm not really sure. This album was definitely easier to make. This is the second full-length with John Low and we were kind of in the groove with this one. Coming from having some down time this past winter to write and to come into a familiar studio it just had a different vibe the whole way around this time. We had much more fun, not to say that we didn't have fun with LP2, but with this one it felt like it was a group of friends hanging out having a good time type of thing. I really feel like we figured out what we were finally doing. It was a little more cohesive, we like it a lot. Well see how we like the songs after we play it 45 times.

How is it working on your second LP with Side One Dummy?
Itâs been great! Itâs just been really easy. We had time off and we were like, "Hey, we think we might want to make another record" and they were like "Sure, have a good time." They have been really cool about it all. They have been very helpful very supportive and great with helping us with direction, they are not asking for us to write singles or radio hits or any of that. They are stoked that we are actually touring.

It's more like you are super stoked that you are doing stuff on your terms.
Yeah, it's just a fun thing for the both of us. They just let us have a good time. It's a really nice partnership. We really have a blast and it is a really cool place to be to have that kind of support, it's really crazy. Before, when we wanted to put out a record it was like "OK! Everybody, pick up a second job." Kind of like being in grind mode. Now, its like "Oh, we have some time lets make a record," let's not sweat it so much.

You guys created a music video for your song "Separate Songs" Tell me about the process of creating that music video…
That was pretty cool. We decided we wanted to do something for the new record that we haven't really done before… premiering stuff isn't something we really do. We wanted to do it proper this time around. We wanted to film something in a really weird environment. Actually we already have one (Laughs). It's a lovely home, we just kind of spun it a little bit for this. Thatâs actually Carlin's parents' house out in Harrisburg, PA, that is also Carlin's brother that is in the video. He was a real sport. I don't know how it happened but Carlin's folks thought that idea sounded real cool, they made room for us to shoot for a couple of days. We went to Harrisburg for a long weekend and shot for a while. We have known Mitch Wojcik for a long while, he has done photography for us for a while and John Komar does that Village Sessions and videos. Both of those guys are immensely talented and old friends of ours. It's great to work with people that you know and you have a lot of trust with, that made it a fun couple of days. It's really tiring playing the same song 90 times but it was a really cool experience. It's a fun process. We're not really a video band but it was fun to do every now and then I suppose.

Did the video convey the message in the song?
A little bit. The way that I approach it with artistic collaborators is I like for them to put their own spin on it. I don't like to over direct or take too much control over that stuff. I just let them do that stuff and just go with however it gets interpreted. If I have full control over it and make it the way I want it to be then by the time it gets out there, someone will have their own perception of it and I wont have full control over it anyways. Just let them go nuts with it usually we get something way more interesting and way more satisfying for them. I think it worked out really well I would have to say. It's done the right way, at least the way I would want it seen.

Tell me about the album art for LP3?
This is great. We were in St. Louis. Danielle Spradley did the artwork, a really fantastic artist. We never met her before. We're sitting in the Firebird waiting for the show to start, you just hear somebody yelling from the other side of the venue, from the merch table, screaming to us. Apparently she knew one of the guys that did one of our old t-shirt designs from a long time ago and it was like, "I know him!" and we started talking to her. She has a loft art space in St. Louis and we ended staying there and checking out her studio. The artwork that made it on the cover was this huge gigantic painting that was hanging on the side of her studio when you walk in. I think everyone in the band had separately gone in at one point to take a look around the studio. We were all like "Man, that one in the studio as soon as you walk in was crazy." When it was time to talk about artwork, I sent an e-mail around asking everybody what they wanted to do. Everyone unanimously said that it would be cool if it were Danielle's work. So I wrote Danielle and she was totally into it. She hooked us up with the artwork for the album. This was the only time our band was completely on board with something, it came together so easy and so smooth. We're all really happy with it. It's a really cool looking cover.

Where do you see the band going with your sound next?
I dunno, it's kind of a trust thing. We've been getting a bit looser with what the band can do now. We feel like you can play less and get the band to contribute when necessary. This record was a lot more about playing less and letting the band do a few more things here and there. We'll see where that will end up. Only time will tell I guess, it also depends on what mood we're in, I suppose.

Do you ever see the band transitioning outside of the punk indie sound?
Itâs hard to say. I like to say we'll be in some transcendent art space. We'll probably just be some bar punk band. I don't think anyone has any desire to go in that direction. I think a lot of a band that goes in a complete different direction after a few records no matter what they're good at. Maybe because of boredom or what they think their expectations should be or something. For us the core stuff that we like is what were doing and I can't see us changing dramatically down the line. Maybe I'll come back and eat it later after saying that but it seems like we like the world we live in.

You guys are set to perform at an art installation in Washington, D.C. Tell me about your contribution to Call + Response IV?
We're super excited about it. Kira W. hit me up a couple of years ago saying "Yo! You gotta do this!" It sounded a lot of fun but at the time there was no time, scheduling was crazy for us then. This time she hit us up and we were like, "Actually we might be able to pull this off." This might tie into the last question about what we may want to be doing, where things might go. I really enjoy doing projects like this. I really don't see the commercial consideration whatsoever. This was really gratifying, we just got to have a good time and work on something weird and esoteric and then let it go. Same thing with the artwork that is a part of the show, I really like watching people take the art with the music as the influence. I am really excited to be a part of this thing and be a part of this with Kira. It's a really cool project and I hope that we can do more of this stuff in the future. Itâs a really unique opportunity that most bands don't get the chance to do.

Tell me about this exclusive instrumental track?
It's very long, it's a 12-minute track. We recorded it with John Low live at Miner Street Recordings. It's one 7-inch so it kinda pauses in the middle on a locked groove on one of the sides. You will then flip it over and it continues itself on the B-side. It's really cool. Dave had this riff idea, it's kinda like a song we didnât edit it as much as we wanted. We kinda just jammed on it a lot and kept it open ended, it's basically three movements all tied together around the same basic theme. Nothing too intense or crazy. We don't often have the opportunity to do something long and meandering. We really enjoy music like this, we can get used to doing stuff like that.

Is there a place that you guys haven't played yet that you are dying to play?
We keep on talking about this. I really want to get to Alaska, I really want to knock off the states and I'm trying to knock off South America. I feel like we'll get to Canada as a whole soon and I feel like that is attainable. I feel like South America is kinda crazy to put together and it's a beautiful place, the scene also seems really cool. Everyone I know who has gone has said such wonderful things about it. China might be cool too, one thing at a time I guess.

Do you have any upcoming tour plans?
We're gonna do a bunch of dates around The Fest, that is basically the rest of our year. Were going five days down to Fest with Self Defense Family, who I love. Then we're going to play Pre-Fest and then Fest. Back up the coast with six shows with The Smith Street Band, which I also love to death. Their new record is also coming out for Side One Dummy, which is also awesome. They're family to us and when the opportunity came to tour we were like, "So, if your kind of just going to be here we're playing some shows." We're doing that and kind of just chilling out for a little while. Its going to be kind of quiet for the holidays, it might be kind of nice.