Lou Koller (Sick of It All) 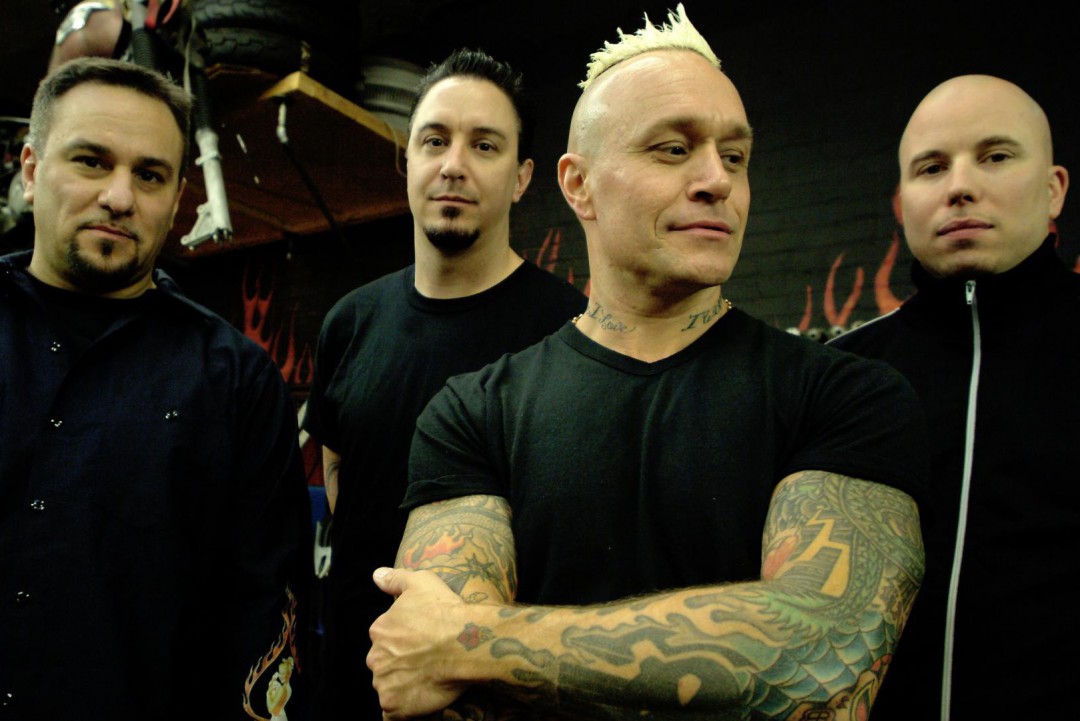 New York Hardcore and Sick of It All are synonymous. For the past three decades, the band has been keeping it hard and heavy, blasting out massive cut after massive cut.

But while many of the bandâ€™s peers slipped into cliché or routine, Sick of It All has kept their music constantly interesting, pushing the boundaries of hardcoreâ€™s sonic attack or addressing topics previously untouched.

For example, on the bandâ€™s new album, The Last Act of Defiance, frontman Lou Koller tackles topics including assassinations of political figures, aging gracefully in the hardcore scene and the issue of Constitutional rights.

To learn about the new album, Punknews Features Editor John Gentile spoke to Koller about the Constitution, the ethics of moshing and that time Will.I.Am (unknowingly?) included a Sick of It All reference on his solo album.

Your new song, â€�"DNC,â€ seems to focus on Constitutional issues. I donâ€™t know if Iâ€™ve ever heard that expressed in hardcore. Are Constitutional issues something that youâ€™re interested in getting young people educated about?
Yeah, definitely! Itâ€™s one of those things that you are taught growing up that itâ€™s the law of the land, that even the government has to obey it. But, they just trample it. Itâ€™s something that has always stuck with us. Craig wrote this because heâ€™s very adamant about the second amendment. Heâ€™s not a gun nut. He doesnâ€™t want a howitzer in his living room, but he believes that the reason that it was put there was to keep the government in check.

Some punk rockers feel that the Constitution is fundamentally flawed document. Others feel that the intent is good, but the execution is warped. It seems that you believe in the fundamental tenets of the document.
I could see where people donâ€™t respect it because it was written when there was slavery. There were a lot of controversial things going on at a time -- writing a document about freedom during slavery. You could say that there was a class system in America at the time. But, it had the right idea -- freedom. Democracy is a good idea, but it jut hasnâ€™t been used to its fullest.

There are periods in the United States when freedom is expanding, but then it gets cut back. For example, corporations started out as a certain thing. But then, they grew through lobbying and rulings, and it fails. You could say that itâ€™s to a point where if you have enough money, you can do whatever you want.

Do you think that things are getting better or worse with regard to individual rights?
Thatâ€™s a hard one. The way the world is now, letâ€™s say there are extreme dangers with religious factions, the whole Middle East situation. But, then, how much of it is the government making up? Is some of it a lie to take away our rights. Itâ€™s something that you canâ€™t just discuss in five minutes. There are so many layers to it. Personally, Iâ€™m not for the whole Patriot Act or where they can spy on your cell phone. But, on the other hand, where they have closed circuit television in Britain, it solves a lot of heinous crimes. Itâ€™s complex and you canâ€™t really discuss it in just one question.

The first single, â€�"Road Less Traveled,â€ was really, really well received. Tell me about that song.
My brother Pete wrote the main riff. He came up with the concept of the lyrics. We have a lot of friends who are in this hardcore punk scene. As they got older, they had to get jobs and stop playing music. We just kept playing. There were years where we didnâ€™t have a dime to our name. You get in at 3 a.m. from playing a show and get up at 6 a.m. to go to your job. We did that for years.

Now, our friends are like, â€�"Wow, you can live off your band?!â€ Well, we can. Itâ€™s not like weâ€™re rock stars. Itâ€™s like a decent job, except that itâ€™s the most fun job Iâ€™ve ever had. The "Road Less Traveled" is saying that itâ€™s either feast or famine. Pete and I sat down and wrote the lyrics together. This is the life we chose and weâ€™re not going to whine if it doesnâ€™t work out.

A few of my very favorite bands have brothers or close relatives in them. Do you think that working with a blood relation conjures a sort of creativity that is unique to that bond?
Iâ€™d say, yeah. Iâ€™m not a guy who believes in mystical stuff and all that. Thereâ€™s a lot of time when we are on the same page. When we started this album, I said to Pete, I hope you bring some riffs from releases like Death to Tyrants or â€�"Death or Jail.â€ It was hardcore but different. He said, â€�"Iâ€™ve got one right hereâ€ and started playing â€�"Road Less Traveled.â€ It blew me out of the water. He said what he wanted it to be about and showed me the first few lines that he wrote. I said that we could go to a place with it, and it just clicked. Sometimes, when we are all in the same room, it just clicks, and I think itâ€™s because weâ€™ve been together for so long.

Hardcore bands are notorious for their short life spans. Punch just broke up a day or so after their record release show. Looking further back, both Cro-Mags and Bad Brains broke up after their first LPs. But Sick of it All is getting close to 30 years! What is the secret to hardcore longevity? Is there, like, no in-fighting in Sick of it All?
Well, there is. There is in-fighting. There are arguments and a lot of strong will, but we all want to keep doing this. When we started playing in Sick of It All we never thought that it would become a career and it just happened to. Itâ€™s something that we all love. So, when there are arguments, we sort of know when to back down.

A lot of the time, one guy in a band might have a strong will and things donâ€™t go his way and bands end up breaking up. Some of the greatest hardcore bands make amazing music, but they themselves are very intense people. Thatâ€™s why the Cro-Mags, the first album was amazing and they just dispersed. The Bad Brains have put out such amazing music, but they are such intense people.

But, as for us, we are sort of laid back. We grew up with each other before we started a band. In our teen years, we were always joking around or taking shots at each other. When we get into arguments, itâ€™s always about the facts, an then after that, we can sit around and joke about it. we never bring personal business into the mix.

Right now, there is a lot of debate about stage diving and moshing in punk rock. Some people think that you shouldnâ€™t do it at all. Others see itself as a form of self-expression. Sick of it All fans are famous for their fervent moshing. Where do you stand on the issue?
Itâ€™s strange. Looking back, going to GBH and then going to the matinees at CBGBs, it was always scary and violent in the crowd. You didnâ€™t feel like you were in danger, though. At some of the shows, you might have because you didnâ€™t know everybody by sight. At the shows, the dancing was rough but I never really got hurt. I understand people not wanting -- I mean, with all the barricades and stuff now, people can really hurt themselves if they land on the barricade. Or, if they make it over, theyâ€™ll really take people out because they are flying at a higher distance and speed.

But, personally, I love dancing and going in the pit. Now, if Iâ€™m at a show, I stay close to the backâ€¦ unless itâ€™s a band that Iâ€™m super psyched about. then, Iâ€™m right up front. I can take a couple people landing on me, but not as much as the old days.

If people donâ€™t want to get hurt, I understand it. But, there are spots where you can stand and not get hit by stage divers or whatever. Itâ€™s always a part of the scene, and it found its way into metal. Itâ€™s just part of the culture. The main thing is, though, if your dancing or not, itâ€™s about respecting others.

Lou, did you know that there is a Sick of It All shoutout on a Will.I.Am. record?
What? No! Will.I.Am! What?!

On his track â€�"Take It,â€ he features KRS-One, who raps, â€�"Before rock met rap I was sick of it all!â€ Of course, that references when you famously had KRS-One do the intro to your debut record. Do you still keep in contact with the Blastmaster? Did you foresee the hardcore/hip-hop crossover that would follow after your collaboration?
Weâ€™ve stayed in touchâ€¦ not as frequent as we used to. When we re-recorded a bunch of our old stuff, we sent a message to KRS-One, and asked him if he wanted to do it, he said, â€�"Sure!â€ He didnâ€™t ask for any money. He just said, â€�"send me a bunch of t-shirts.â€ He updated his spot for â€�"Clobberinâ€™ Time.â€

We didnâ€™t foresee hardcore and hip-hop mixing, but it was natural. We used to go see a band called Nevermore, not the metal band, but another band, and in the middle of their set they would do Run-DMCâ€™s â€�"Rock Box.â€ It was just so natural that no one cared. There were other bands that were incorporating hip hop into their acts. This was before gangsta rap came along.

Why did he want a lot of shirts? Do you think he wears them?
If they fit him. He asked for triple extra large!

Well, he is a very, very tall guy. Lou, the new album is great. Whatâ€™s something thatâ€™s really going to wow us on the new album?
We take our classic style and take it a step further. People have been saying that the energy is there. Some bands go into cruise mode and do a couple of catchy songs and cruise through. This record is non-stop from the get-go. We put the pedal to the floor and keep going.