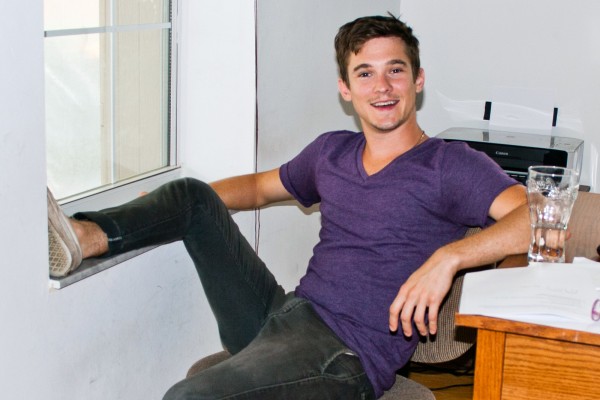 Contributed by gapostrophera, Posted by Kira Wisniewski Interviews 8 years ago

If you canâ€™t find something to love out of all of Chris Farrenâ€™s different projects between his solo work, Antarctigo Vespucci and Fake Problems, then chances are that you have real ones. The punk frontman turned acoustic troubadour turned power pop maestro wears a variety of hats, and recently added t-shirt impresario and Lost podcast host to his impressive array of titles. Staff interviewer Gâ€™Ra Asim caught up with Farren to get the lowdown on making a Fest appearance with a brand new band, his estrangement from once-dear friend Mr. Yucky and the unlikely role the Fresh Prince played in the making of Antarctigo Vespucciâ€™s debut EP, Soulmate Stuff.

As I understand it, youâ€™re on the Koji tour right now. Is that correct?

Yeah, Iâ€™m doing a run of acoustic shows with Koji. Itâ€™s Koji, me and this band Lee Corey Oswald on No Sleep Records.

One thing I was kind of wondering about is, what with you doing Fake Problems, the solo thing and A/V, when you sit down as a songwriter, how does a song lend itself directly to one project? Or is that something you think about after the fact?

It kind of can be a little bit of both. I never sit down and say, â€œIâ€™m gonna write a song for Fake Problems. Or Iâ€™m gonna write a solo song.â€ But I will start -- well, I guess thatâ€™s not totally true. If I have something coming up or maybe Iâ€™m gonna do a split with somebody, Iâ€™ll write a song with that kind of in mind. Or, Iâ€™ll just take from my big giant pile of songs that Iâ€™ve written over the years and take from that. So itâ€™s kind of situational, but I never think â€œOh, Antarctigo Vespucci sounds like this, so I need to make a song that sounds like this.â€ Itâ€™s just about songs and then I think the circumstances of who I make music with kind of informs them turning in to the way they sound. Like I could make a song with Fake Problems and I could make the same song with Antarctigo Vespucci and they would both sound -- I mean, theyâ€™d be the same song, but they would both sound very stylistically different. So I never reallyâ€¦itâ€™s never like a worry.