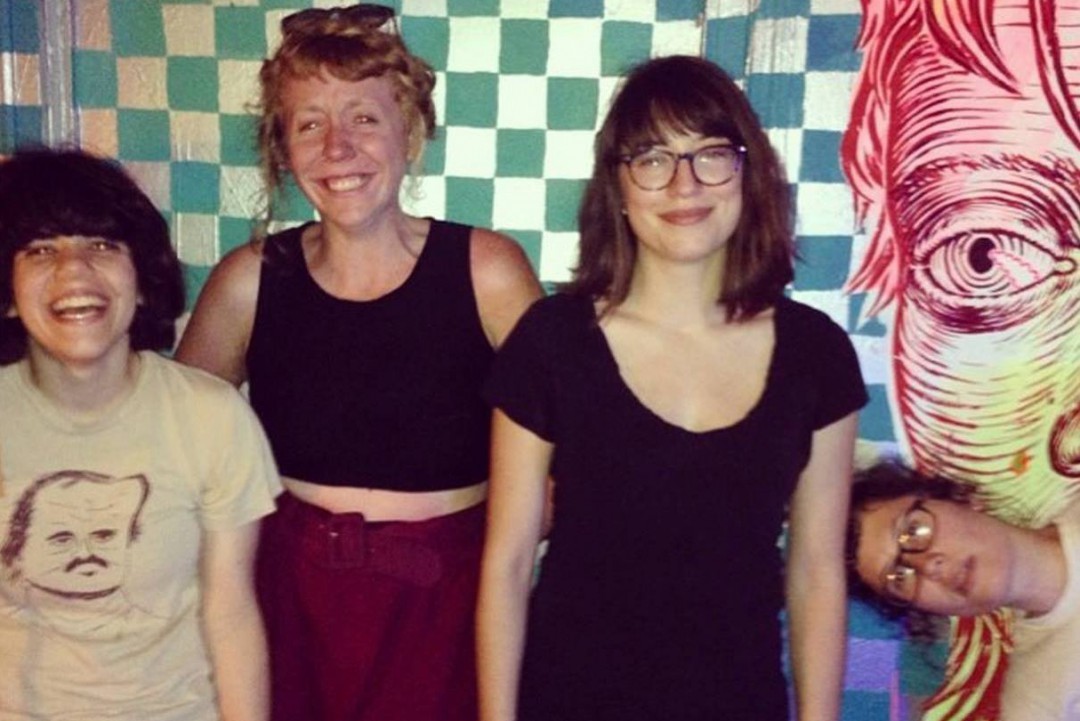 Bad Canoes is the berserk new band featuring Marissa Paternoster of Screaming Females on vocals. Sounding sort of like a cross between The Slits, The Screamers, and X-Ray Spex, the band has songs about Satan, marshmallows and good radio stations. They also frequently post information about Polar Seltzer on their Facebook for no apparent reason.

The band recently released the fantastic Sisterhood is Powerful EP and have begun recording a follow-up release. To see what this group was all about, features Editor John Gentile met up with them after a gig to talk about how they formed, their tunes and what the deal is with Polar Seltzer.

It's a cold November evening at an abandoned bank in Flemington, New Jersey. The teller stations are still mostly intact, with some of the drawers still holding pens, paper clips and the occasional penny. Some of the drawers have been ripped out of the cabinets and tossed on the ground. The drive-through microphone actually still works and you if you flick it on, you can speak to the empty drive-through station. The heavy vault door is open, revealing its thick gears and a vault that still has hundreds of safety deposit boxes, many of them smashed open.

About 20 people, mostly college kids, are standing near at the back of the room around a small, mobile PA system. Just in front of the speakers, Marissa Paternoster is crawling on the ground. As she crawls (and slashes at people's feet), she screams into the microphone â€œDo you, do you, do you dare me to eat?!â€ Her voice is so jagged that it sounds like she's tearing her vocals chords with each refrain. And, as she rolls on the ground, howling, kicking her feet in the air, she is flagellating herself with a small chain. Then, when the next song starts, she pulls herself to her feet, continues to whip herself with the chain, and spits in one guy's face, â€œIf you don't like it, get the fuck out!â€ She continues to yell this 11 more times.

Christina Centaur (yes that's her real name) stands just to the right of Paternoster. In stark contrast to the epileptic moves of the band's frontwoman, Centaur stands there like a statue, moving only her fingers, the rest of her body seemingly frozen. To the left, the statuesque Kate Illes leans over a keyboard, her fiery orange hair drooped over her face and sliding across the keys. As she lurches over the board, she whips her body back and forth. It looks like her hands are nailed to the keys and the rest of her body is trying to get away. In the back Dawn Riddle hammers on the drums. If you saw Riddle walking down the street, with her nerd-chic glasses, wool cap and thick curls, you'd say â€œOh, there's that nice girl from next door.â€ But, behind the kit, as she stomps on kick drums, smashes the cymbals and hits the snares so hard that they shift across the room, she looks like she's about to tear someone's head off.

This is Bad Canoes.

Their first EP, Sisterhood is Powerful was a berserk release. Short, mean and snappy, it had the off-kilter jilt of The Slits, the frenzy of X-Ray Spex and the straight-up weirdness of Zappa. Adding to that weirdness is that, in lieu of a standard rock setup, the band eschews the guitar and replaces it with a funeral home keyboard. As the band zaps and bolts away, Paternoster screams about being impregnated by Satan, hanging out at the mall and eating dog treats. Adding to the mystery, the release opens with a sort of spell that warns destruction against any who would dare â€œdisobeyâ€ the sisterhood.

â€œSisterhood is an idea and a practice involving a connection between people celebrating comments and attitudes,â€ Centaur tells me after the gig. We're all sitting in a circle on the floor of the bank. Both Centaur and Illes speak rarely, but when they do, it's insightful. Dawn Riddle seems to act as the band's managing head, giving straightforward, matter-of-fact answers. Meanwhile, Paternoster, the explosive, frantic frontwoman, spends most of the interview rolling around on the floor, occasionally jumping into and out of the conversation.

For instance, she adds, â€œBad Canoes is a sisterhood. Sometimes we don't even practice because we are all on our periods. We're synced.â€

Riddle adds, â€œWe were even synced when Marissa was on tour, even though it was long distance.â€

Despite the gender-specific conversation, the band applies a broader, more malleable definition to the term â€œsisterhood.â€ Illes says, â€œPeople who don't get their period can also be part of a sisterhood. You see, femininity is an aspect, but feminine identity is a fluid concept. To me, it's meaningful but it's not a concrete concept. It's not sex based.â€

As is fitting for the band's berserk, wanton, flippant style, they didn't so much form as collapse into the same unit. Riddle, who had drummed in Philadelphia bands for several years, decided to start a new band and asked Centaur to join. However, Centaur had only ever played one gig before -- in a Kleenex cover band. The pair jammed for about six months, just bass and drums, formulating the foundations for the group's weird, snapping numbers. Eventually, they asked Illes to join the band, despite the fact that Illes had never played a show before, and really, at the time, could barely play an instrument.

â€œThere was this festival in Philadelphia called â€˜The First Time's the Charm,'â€ Illes says. â€œIt was a festival where people who had never done things, like play in band, would do it for the first time. But, we never got a singer so we never played. I decided to play the keyboard instead of the guitar because it seemed easier.â€

â€œThen I joined the band via text message,â€ Paternoster adds. â€œI didn't know Dawn before. I've known Christina and Kate forever. I sent Dawn a text message that said, â€˜I heard you have a band. Can I be in it too?'â€

And really, it's that dynamic which sets the band apart from their contemporaries. On one side is the interlocking gears of Centaur/Illes/Riddle. Having learned to play their instruments in the band and with each other, has given the band a spastic nature. Like a snake, the band slinks along in a wobbling, undulating beat before suddenly striking outward in a combination of feminine energy and sonic violence.

And then, on the other side, is Paternoster, who weaves strange tales that find her screaming â€œEucharistâ€ until it sounds like her throat is bleeding, or in tunes like â€œ6666,â€ she wails like a blues singer -- say either Nina or Janis -- before flashing her teeth and growling like Kathleen. Religious imagery is littered through the band's catalog. But, unlike your average d-beat band, the message isn't â€œReligion is stupid!â€ As Paternoster salutes Zeus' meal on â€œAmbrosia Saladâ€ or asks Moses to â€œpart my red seas,â€ there's something else at work here.

â€œAmbrosia salad?â€ Paternoster asks me after I ask her why she is always asking people how many marshmallows they have eaten that day. â€œAmbrosia salad is what God eats in heaven and it's made out of marshmallows and canned fruit and sometimes nuts and it's served on one leaf of lettuce and is eaten by all the great deities. What do they eat? Strictly ambrosia salad. So, when we die and all go to heaven, we get to eat marshmallows all day and night.â€

It's worth noting that after difficult years in grammar school, Paternoster transferred to a Catholic high school, where paradoxically, she fit in better, perhaps, due in part, that everyone in Catholic school is subjected to the same (arbitrary?) set of rules. Don't speak up. Don't ask questions. Wear these clothes.

â€œWe do have a reputation as a religious band,â€ Riddle acknowledges the band's favorite topic. â€œ'Doggie Bone,' â€˜Ambrosia Salad,' â€˜Moses…' â€˜Doggie Bone' mentions the Eucharist, â€˜6666.' We have a lot of super religious songs… well, depending on your definition of the word â€˜religious.' I mean, my parents grew up in a hippie commune in Santa Cruz, soâ€¦â€

â€œI don't know why it's that way,â€ Paternoster continues. â€œIt just happened that way. â€˜Doggie Bone' is based on a true story. I ate a dog bone in second grade during recess. The song is a bout eating things that you aren't supposed to eat. In ninth grade, I ate an entire jar of unblessed Eucharist. One day, a guy gave me his Star of David necklace. That was nice.â€

â€œI think it's funny,â€ Paternoster replies. â€œI'm not angry at religion. I think it's ludicrous.â€

Centaur adds, â€œI think a lot of our band is enjoying the ridiculous contradictions of things that are taken as normal. Really, I think that's what we do.â€

â€œWe're a serious band,â€ Riddle continues. At this point I realize that the band also shares a sort of hive mind, jumping into and out of each other's sentences without break or hesitation -- â€œbut we as people are not serious. We all appreciate absurdity. There's no reason why absurdity and good music should be mutually exclusive.â€

Just as I begin to respond, Paternoster suddenly cuts me off, which in a way, undercuts the band celebration of the absurd. Paternoster says, â€œPolar Seltzer has exclusive flavors that go far above and beyond a normal seltzer company. They have seasonal flavors! Strawberry, champagne, cranberry, clementine! Zero calories, no sodium added, natural flavors.â€

â€œWhy be flat when you can sparkle?â€ Riddle suddenly asks me. I have no idea what is going on, but I later learn that the question was a throwaway post on Polar Seltzer's Facebook page.

But, considering how vicious the band can sound, considering how unhinged their shows are, considering how they flip from soulful crooning to manic smashing with the snap of a finger, considering how "Safe" most punk ands are, it would seem that Bad Canoes have taken the fleeting marketing quip and transformed it into a mandate enforcing the potency of sisterhood… Perhaps a mandate as ordained by God herself, regardless of how absurd she might be.