Chris Urban (Crazy and the Brains) 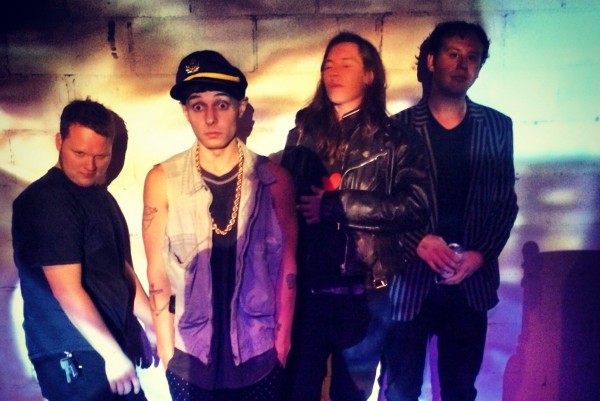 Crazy and the Brains are talking about God and sex. Their new EP, Good Lord (Baldy Longhair), finds the band dissecting concept of religion, but never being exactly clear with their motive. At times, they seem to appreciate the great tradition of Catholic art, and at others, they seem to be pissing on the same exact thing. Also, there are sex jams on the EPâ€¦ a lot of sex jams.

The band somewhat puzzled the punk scene with their debut from a few years ago: Here was a revved up, garage rock-influenced band that played at 100 miles per hour, that had a front man who perpetually wore a skipper's hat, that had xylophone on every track. They were weird, confusing and totally rocking. Well now, theyâ€™ve increased the juice. Good Lord kicks harder than their earlier stuff, indulges in soul swinging more than ever before and has a song about how great â€œice creamâ€ is.

To try to get a handle on what is going on with this quartet, features editor John Gentile spoke to front man Chris Urban about the church, getting expelled from school and why Vampire Weekend sucks.

The new album is called Good Lord. Whatâ€™s your religious background?
All four of us actually grew up Catholic. Me and Jeff, we all went to Catholic grammar school. Me and Jeff went to Catholic high school. My parents have like Catholic art and artifacts all over the house. Ever since I was a kid, the Catholic religion has been ingrained in us. Weâ€™re not practicing. Weâ€™re not religious people, you know what I mean? We went our own way a long time ago. It was just kind of funny to us. â€œGood Lordâ€ has been a phrase flying around out house forever, and itâ€™s rubbed off on us. Weâ€™ll just say, â€œGood Lord!â€ It kind of acknowledges the way we grew up, but it also pokes fun at it. Like I said, weâ€™re not religious. Weâ€™re spiritual, in a certain way, but we donâ€™t follow any religion. I actually donâ€™t like what the Catholic religion is all about, because I learned everything about it growing up.

Thatâ€™s interesting, because so many hardcore bands are like, â€œThe church is evil!â€ â€œI hate religion!â€ But you guys seem to approach criticism of the church from a different angle.
We all learned everything. We know everything that is fucked up about the church. The way they try to bring you up -- itâ€™s fucked up. Thatâ€™s why we turned away from it. At the same time, we grew up with it.

Thatâ€™s my brother on the cover doing Holy Communion. Itâ€™s so ridiculous when you look at it. Heâ€™s wearing a cross, heâ€™s holding a cross, thereâ€™s a cross behind him. Itâ€™s so silly. Itâ€™s ridiculous propaganda. We were like, â€œThis is it. This is the name of the album.â€

An interesting thing about the Catholic church, thereâ€™s a great embrace of art, with the wonderful paintings and stained glass. But also, thereâ€™s a great distancing from art -- you can only depict certain things in a certain way. Has any of this approach rubbed off on your band?
I love all that Catholic imagery and artwork. I came up loving art and drawing it, in school. In art class we had to draw pictures of Jesus and stuff like that. It rubbed off because I think the imagery is cool. I twist it around to my own fuckinâ€™ way. I could never fit into the box that they try to keep you in.

Who was your least favorite priest and most favorite priest?
Dude, a lot of those guys hated me because I had a mohawk in high school -- actually, I had three mohawks. They were not fans of me. I would get pulled out of class and lectured. I was trying to express myself my own way, which they didnâ€™t like. There were one or two cool brothers who were open minded. My favorite one was the second head brother. I got expelled for skipping school too much and just fuckinâ€™ around. But he let me back in because I was like, â€œMy parents are going to throw me out of the house. Theyâ€™re going to kill me.â€ So he let me back in, which like no one ever does. He saw something in me even though I was a weirdo and wasnâ€™t following their way in life. So, he was cool. Everyone else sucked.

To me, the band is extremely punk rock -- with the xylophone, the weirder lyrics. But, it has made it difficult for some people to put you in a box. Do you consider yourselves punk rock?
Yes, when weâ€™re sitting around, the four of us, weâ€™re punk rockers. But, I donâ€™t really give a shit. Most people donâ€™t think of us as a punk band, but I donâ€™t really care. At the end of the day, itâ€™s music. I know that we came up as punks. Punk influences us. I know that weâ€™re doing our own thing, too. When people think of punk rock, they immediately think of something like Black Flag. They donâ€™t think of the whole history of punk rock. But, I donâ€™t care. To us, weâ€™re a punk band.

For most punk bands these days, they donâ€™t talk about sex at all. But, a lot of the lyrics on the new album are sexually charged. â€œIce Creamâ€ has â€œIn and out, baby, in and out/ Yes, thatâ€™s what weâ€™re about!â€ A lot of the early punk bands had sex tunes -- The Clash had â€œProtex Blue.â€ Buzzcocks have sex tunes. Even Crass has sex tunes. Do we need more sex jams in todayâ€™s punk scene?
I mean, sure! Why not? I just write about whatâ€™s going on in my life. Thereâ€™s so many -- almost every other song with pop music is about sex. But, itâ€™s so boring and so blatant. There isnâ€™t much thought put into it. I think itâ€™s cool to write a song about sex, which everyone can relate to, and then twist it around.

Punk bands today, itâ€™s ironic. Itâ€™s the opposite of what it started out to be. You have to look a certain way and write a certain song. Weâ€™re not about that.

I think â€œIce Creamâ€ has the lyrics â€œI donâ€™t want to be your friend.â€ Have you had issues with being friendzoned in the past?
That line mainly meant that Iâ€™m not trying to be friends -- Iâ€™m trying to get something going with a girl. Me, personally, they donâ€™t really like me initiallyâ€¦ I donâ€™t know why.

You think that people donâ€™t like you?
The same reaction that people have to the band they have to me. Initially, people are like, â€œFuck these guys! I donâ€™t recognize this! So fuck them, theyâ€™re hipsters!â€ Thatâ€™s what I get personally, too. Once people get to know us, people see that weâ€™re not very different.

Speaking of getting things going, what is the Christopher Urban approach -- is it a pick up line? Is it just staying hello? Or, if I may paraphrase Keith Richards, â€œIâ€™ve never approached a woman, everâ€?
I havenâ€™t heard that, but to be honest, thatâ€™s what I do. Iâ€™m kind of a shy person. I have a few friends. But, I donâ€™t really go out of my way to talk to girls. If a girl talks to me, weâ€™ll see what happens, but Iâ€™m not out there trying to talk to people. Iâ€™m friendly if you talk to me, but I wouldnâ€™t start a conversation with a random person.

You also have a song on the new EP that seems to dis Vampire Weekend.
I actually liked their first record. That song is a response to their wholeâ€¦ we spend a lot of time in Brooklyn because we record in Brooklyn and play shows. Thereâ€™s so many people that mimic their style -- very clean cut, and proper looking dudes, but try to say that theyâ€™re punks. Not that a punk rocker has one uniform style, butâ€¦ itâ€™s likeâ€¦ just fuck off! Fuck you guys!

They have a song called â€œA-Punkâ€ and this is our response to it. I saw this video of them playing a Blitz song, and I was like, â€œLet me check this out.â€ And then I was like, â€œFuck offâ€¦â€ Then they covered â€œRuby Soho,â€ ughâ€¦

Itâ€™s also kind of light-hearted. We wanted to take a shot at the guys at the top. Because, why not?