Good Riddance to release 'Peace In Our Time' in April

Fat Wreck Chords has announced that Good Riddance will release a new full-length LP on April 21, 2015. The LP, titled Peace In Our Time, is the band's first in nine years. Lead singer Russ Rankin said:

In 2010 I had a few songs which I demoed on my own, and when I played them for the rest of the guys, they were stoked and wanted to make them Good Riddance songs. Luke had some really cool riffs and ideas he had been working on as well, so that when the writing process began for this album, a lot of the material came together very quickly. The rest was fleshed out during hours of rehearsal and some help from our friend Bill Stevenson. 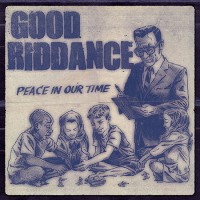