Viet Cong have show canceled due to name 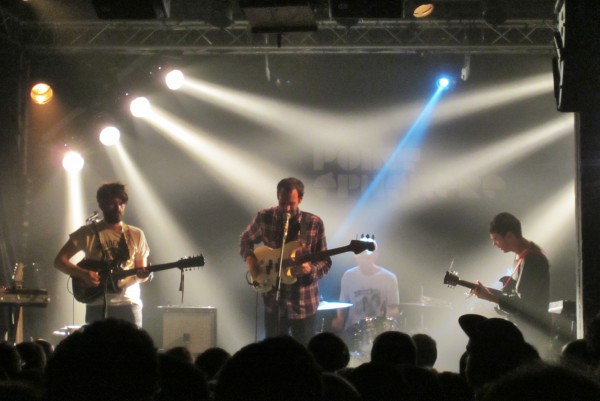 A promoter has canceled a scheduled March 14 show by rising band Viet Cong. The band was scheduled to play at Dionysus Disco at Oberlin college. However, promoter Ivan Krasnov decided to cancel the show. Krasnov stated:

"As the person behind booking this band, I would first and foremost like to apologize on both my and my booking organizationâ€™s behalf for inviting a band with a name that deeply offends and hurts Vietnamese and Vietnamese-American communities, both in Oberlin and beyond. I acknowledge the problematic nature of a band naming themselves â€œViet Congâ€ and extend my apology to anyone hurt or made uncomfortable by the name and its connotations… The fact that the band openly acknowledges their problematic name, yet fails to change it or do anything about it, highlights this blatantly appropriative move, reinforcing a tradition of American (and Western) orientalism and appropriation."

The band has not yet responded. The band released Viet Cong this year. You can click read more for the Promoter's entire statement.

Addressing the 3/14 Viet Cong show at The â€™Sco

I am writing to officially announce the cancellation of the Viet Cong show at Oberlin Collegeâ€™s Dionysus Discotheque (commonly known as The â€™Sco) meant to take place on Saturday March 14th, 2015. This statement aims to express the reasoning behind such a move. As the person behind booking this band, I would first and foremost like to apologize on both my and my booking organizationâ€™s behalf for inviting a band with a name that deeply offends and hurts Vietnamese and Vietnamese-American communities, both in Oberlin and beyond. I acknowledge the problematic nature of a band naming themselves â€œViet Congâ€ and extend my apology to anyone hurt or made uncomfortable by the name and its connotations.

SUPC (the Student Union Programming Committee) is the primary student booking group that books for our on-campus venue, The â€™Sco. As a member of this committee, and indeed Oberlinâ€™s wider student booking community, my principal aim is to build a program of both up-and-coming and established, quality acts that I truly believe will deliver a memorable performance, and leave a positive and memorable impact on the Oberlin and Cleveland-area communities. Often times, these acts are bands I think Oberlin should know about, and are on the cusp of gaining national and worldwide attention. I book talent with these main intentions in mind.

However, that talent should absolutely not be booked at the expense of hurting, offending, or making uncomfortable the very students and general public for which I want to provide quality programming. Such practices are counterintuitive to the positive lasting impact The â€™Sco should have.

Similarly, as a student booker who ultimately represents Oberlin by booking college-funded acts, I must be aware of Oberlinâ€™s history as a progressive and highly conscious institution with an important legacy of social justice and action that needs to be upheld to this day. This legacy is seen notably in the student protests, demands, and direct action that took place on our campus during the Vietnam War in the late 1960s and early 1970s. In the spring of 1970, in response to the Kent State shootings and President Nixonâ€™s decision to send troops into Cambodia as part of the war against North Vietnam, Oberlin College ended the semester two weeks early. Time reported: â€œOberlin College President Robert Carr simply canceled final exams, gave all his students credits for their courses and turned over the campus to antiwar planning.â€ Students today commonly and falsely believe that Oberlin does not require its graduating students to don traditional commencement regalia simply because Oberlin is â€œquirkyâ€; the truth is that the cap and gown was first rejected by students in protest of the Vietnam War and the United Statesâ€™ involvement in it. As detailed in â€œAcademic Regalia at Oberlin: the Establishment and Dissolution of a Tradition,â€ a monograph written by S.E. Plank and published in the Northeast Ohio Journal of History, â€œThe abandonment of cap and gown by the senior class was multivalent in its effectiveness. The refund money from the gown rental could go to the student, to the Strike Fund (in support of the antiwar activities), or to a class gift fund in support of local community projects. The dramatic contrast from traditional expectation vividly underscored that given the extraordinary circumstances of May, 1970, â€˜business as usualâ€™ was an impossible response. Certainly the innovative dress brought wider attention to the issues of the day and to the school itself.â€ To allow a band called â€œViet Congâ€ to play a show and make money at Oberlin College would be in complete disregard of Oberlinâ€™s radical history and of the values it professes to uphold.

Especially troubling is the bandâ€™s awareness of their name inflicting offense coupled with a seeming indifference to its effects and implications. This entire issue was brought to my attention through several of the bandâ€™s interviews in which they exhibit this sort of behavior, seen notably in the video, â€œHello: Viet Cong at Le Guess Who? 2014,â€ (at 4:51,

) and article, â€œThe Ridiculousness of Being Viet Congâ€ (http://www.imposemagazine.com/features/viet-cong-interview: â€œThat [name] comes from our drummer, and from us being teenagers and watching movies. The Viet Cong were always the bad asses in movies.â€) The fact that the band openly acknowledges their problematic name, yet fails to change it or do anything about it, highlights this blatantly appropriative move, reinforcing a tradition of American (and Western) orientalism and appropriation.

What the Vietnamese student community helped me understand is that I cannot claim to fully comprehend the implications of a band (consisting of four white Canadian men) naming themselves â€œViet Cong.â€ I can call out this name for being grossly ignorant and deeply offensive, but I also understand that even if I knew all the historical context, I am not someone whose personal and historical history is directly tied to and affected by the consequences of U.S. imperialist actions in Southeast Asia. This is precisely why I believe it is important for me to listen to the concerns raised by those who do understand and are affected on a deep emotional level. I cannot with good conscience put on this show knowing that it hurts others, and the onus should absolutely not be on those who are hurt to educate the rest of the community on why this name is offensive.

Therefore I am confident in my decision to move forward with canceling the show. As stated previously, I would not have booked this show if I did not enjoy and believe in this bandâ€™s musical talents. They are a formidable act, but I do hope this issue helps instill a reaction in them to more seriously consider the implications of choosing to name themselves â€œViet Cong.â€

Tours: The Meatmen / Against the Grain (East Coast)